Fans of zany humor might remember when AnyStage Theater popped up in the Capital Fringe Festival with its ridiculous (and mostly fact-free) takes on Margaret Thatcher and Amelia Earhart. The quick-witted young company now brings to DC Arts Center’s hole-in-the-wall stage a hilarious new show about Watergate that hews (loosely) to the historical record—except that Richard Nixon and his cronies are played by puppets. 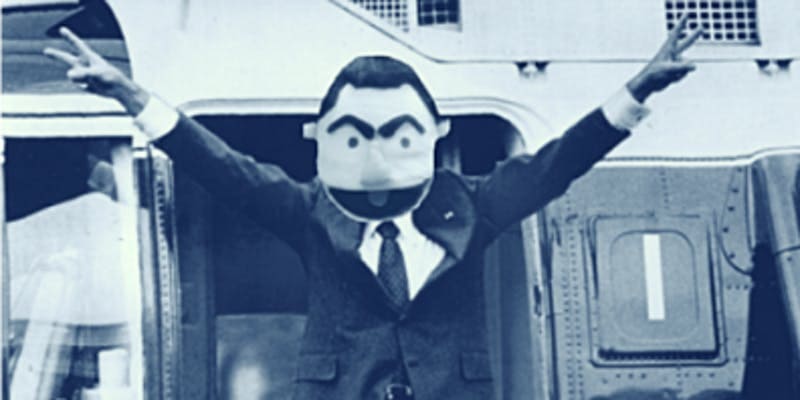 Four adroit comic actors play multiple characters, some as puppets, some not. Alec Scheller and Zach Smith do a recurring conspiracy bit as Carl Woodward and Bob Bernstein that keeps getting funnier. Sheryl Mebane does Gerald Ford as a dim-bulb Commedia clown. Melissa Carter does a hysterically puppetized H.R. Haldeman and Rosemary Woods. And Scheller’s outstanding turn as Puppet President Nixon is commander-in-chief of the show.

The comedy comes in quick sketches reminiscent of SNL on a good night. There’s even a scene using footage from a 1970s-era SNL opener and the catchphrase “Live from DC, it’s the Saturday Night Massacre!” Directors John-Nicholas Walsh (who also wrote the crackling script) and Kirsten Grady set a crisp pace and broad-as-a-barn-door acting style that keep this live-action cartoon spot on.

I can attest that this show’s clever vein of humor connects with someone who remembers when Watergate happened. So it’s remarkable to realize this fun send-up was created by talents not yet born.

The show begins with a trigger warning that it contains disdain for elected officials who commit crimes. And I’m here to tell you: Belly-laughing today at the Nixon administration scandals gives one hope that years from now there could be a show about the current administration as cathartically wacky as Watergate…with Puppets.