“We fight like cats, but we love like dogs.” Marcus Gardley, the author of A Wonder in my Soul has just the right way of putting things. Baltimore Center Stage continues its standard of excellence with its latest production. Wonder is not exactly a new play, but a rethinking of the play Gardley originally wrote about Chicago. This year, Gardley came together with director Daniel Bryant and the Baltimore Center Stage dramaturgy team for an immersive residency to develop a new version of the play, set in our historic city. The end result is a stunningly told story of the love we have for one another, and the strength that binds generations. 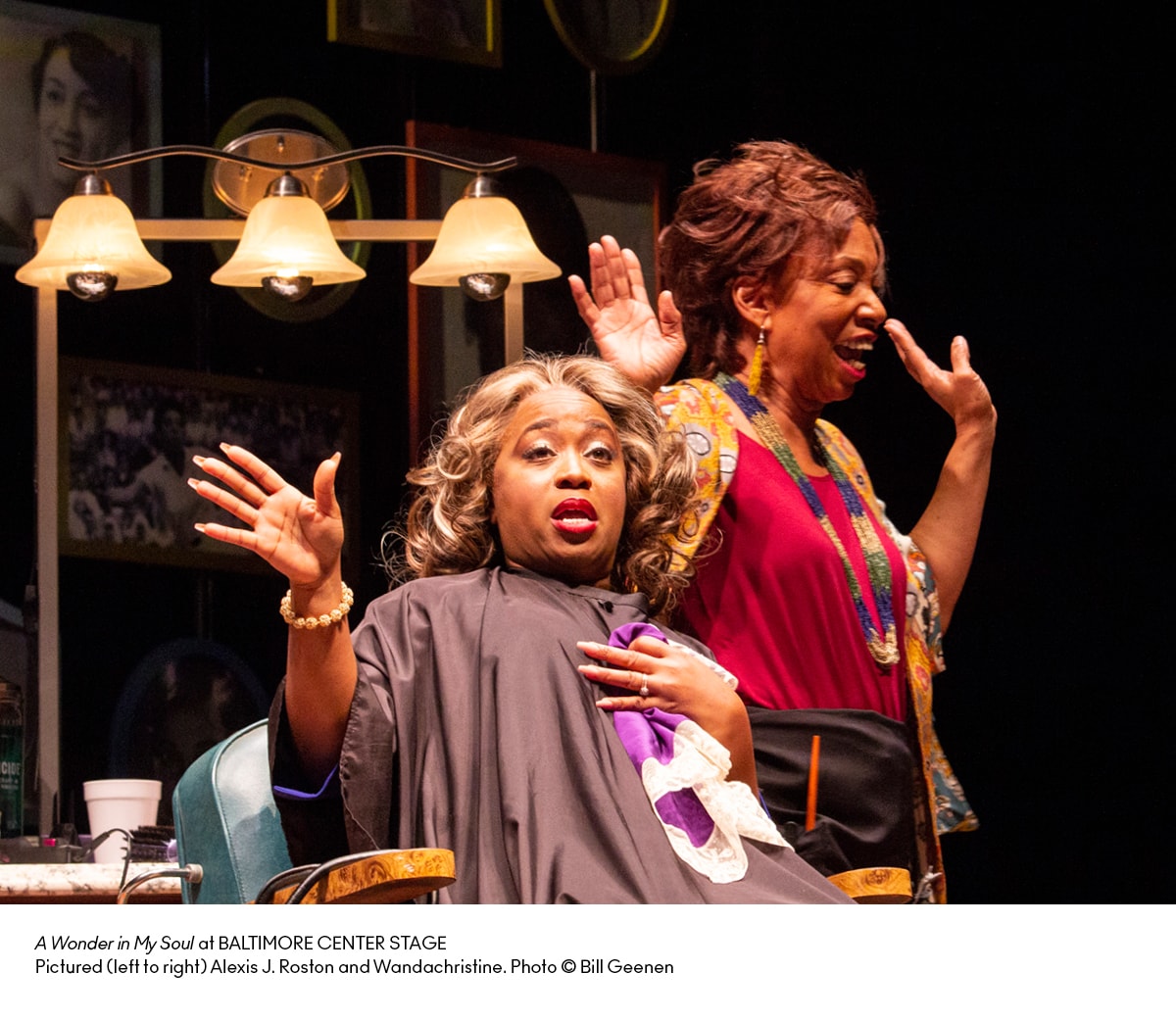 Wonder in My Soul tells the story of two Baltimore beauty shop owners, Gwynn and Swann who have to make a difficult decision in the face of neighborhood gentrification and crime: Relocate their shop or remain to support their changing neighborhood?

Wonder is full of deep, rich details that flesh out the details of this world. I came to feel like one of the neighbors who lovingly got their hair done by Gwynn or Swann. The transfixed audience was along for the ride and you could hear it in their reactions – laughing and sighing and everything in between. There was a moment of shared experience during the performance after Swann baptizes Pen Lucy. Poor Pen Lucy has had the worst day anyone’s every heard of, and Gwynn says the sweetest, most nurturing words to her, words we all need from time to time. The ladies in the salon sing a baptism hymn for her, and when it was over there was a stillness in the theatre. I think it was a mixture of awe and appreciation as if we had been a little comforted by “Ms. Swann” for a while.

Every single detail of the design, production, and performance cohesively worked together to give you a full picture. Wilson Chin’s set design was so eye-catching with all of its fine bits and bobs to look at. It was little details like the magnets on the mini-fridge in the back that made it look like a home, not a set, and atmospheric touches like the snow falling in the background made it feel like a whole world.

The projections, designed by Alex Basco Koch, detail the building and street scenes and quickly transport audiences back in time. They also allowed for clear labeling to avoid any confusion during the time jumps. David Burdick, the costume designer, and Cherelle D. Guyton, the wig and hair designer, worked seamlessly. Guyton’s wig work was impressive once First Lady came in. It added so much to the realism that Gwynn was able to actually style her hair right there while they talked and carried on with the scene. There was some wonderful theatre magic misdirection with the lighting design by Kathy A. Perkins. Gywnn and Swann were able to board a bus with a simple shifting of the lights.

The heartstring-strumming musical moments of the show would not have been possible without the musical direction, original music, and arrangements by Jaret Landon. Wonder isn’t a musical, but it is full of music. From the moments chosen, you can tell that music is a part of these peoples’ lives, and it is a privilege to hear them sing. (Cast album anyone?) One of my favorite scenes of the show was when the ladies in the shop sing along to the radio and belt out “Come See About Me.” It was so pure, so fun, and Anastacia McCleskey kills her solo.

The talent in this cast could power three cities if we could find a way to harness it. The leads include Kalilah Black (Pen Lucy/Young Gwynn), Harriett D. Foy (Swann Park Sinclair), Stanley Andrew Jackson III (Andrew Hill), Anastacia McCleskey (Cherry Hill/Young Swann), Alexis J. Roston (First Lady Cedonia Mosher), and Wandachristine (Gwynn Oak Falls). To watch this show, you would think they all truly were family. The way the women were together, particularly the two pairs of Gwynns and Swanns felt like people with history. I particularly appreciate how the two pairs must have studied each other so that they acted alike. That attention to detail makes a show great. 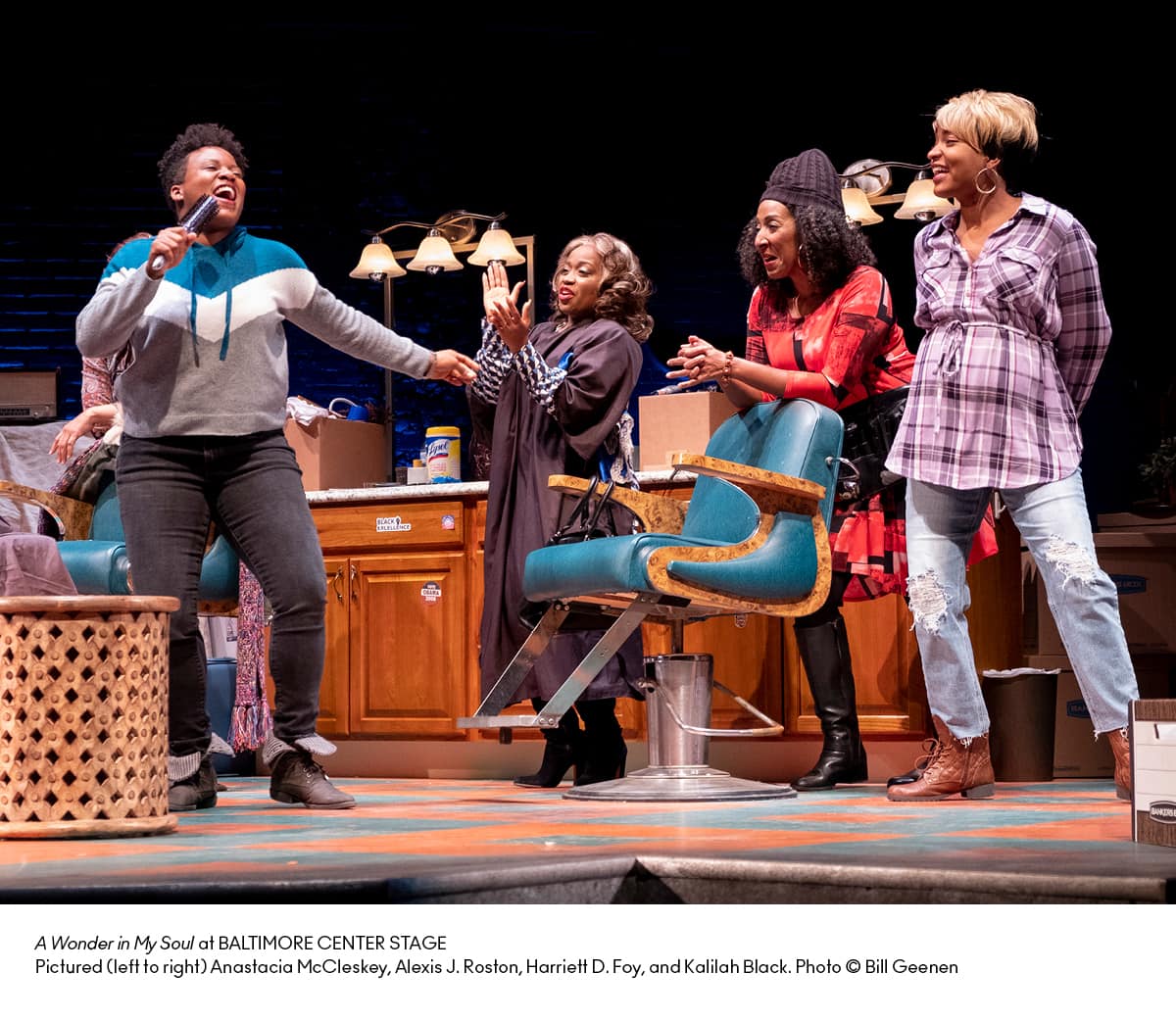 Foy and Wandachristine each start an act of the play with a monologue to the audience; each was different but highlighted their characters in such amazing ways. Foy’s jump-started the show as a comedy with her whip-like comedic timing, which would be contrasted so well with her power and strength later on. Wandachristine’s monologue at the top of Act II was more inspirational, generational. It told you to reach back into your roots and hold on, and she has a melodic way of speaking that enchants and makes you listen.

In this busy holiday season your time is precious. A Wonder in my Soul is a worthy use of that time. It may not be a holiday show in the traditional sense, but it does leave you with that holiday spirit and warmth – that love in your heart.

Baltimore Center Stage encourages you to help inspire the next generation of artists and audiences by making a gift today. Text the word STAGE to the number 243725 the click the link to donate.

The running time is about two and a half hours, with a 15-minute intermission.