The simplest tales can oftentimes bring the most enjoyment. Steph DeFerie’s Season of Light: A Winter Fairytale tells the mythical tale of a young girl, Magda, and a band of actors searching for the Sister of the Sun which returns light to a dying world. The wonder, magic and enchantment generated by Katie Rey Bogdan’s direction and the charisma of stars Claire Gunthert and Carlos Reaves make Silver Spring Stage’s Season of Light: A Winter Fairytale an engaging family fable for Christmastime. 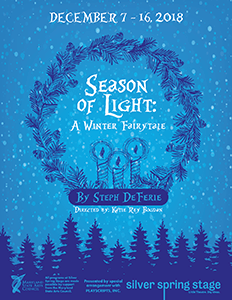 Gunthert, in her debut at Silver Spring Stage, made her character Magda both innocent and adventurous. Magda’s story began in 1585 Europe, with her doing a ritual prayer-like performance, “The Ceremony of the Sister of the Sun,” to bring out the Sun in the throes of the Winter Solstice; when it didn’t work Magda became an outcast who ventures into the wilderness where she meets “The Magnificent Astounding Players,” led by the charismatic Rodrigo (Reaves).

Among the “The Magnificent Astounding Players,” Magda met Apple, who was deaf; Stephen who was blind; and Toot, a mute. Cassie Brode brought a broodiness to Toot. Olivia Waymer brought wisdom to Apple and Zachary Singer brought clairvoyance and intelligence to Stephen.

I liked the interplay between Jaqueline Youm, who played Magda’s mother, and Gunthert. Youm brought power to lines such as, ”We must keep hope alive no matter how dark the Winter becomes.” Brynn Krasney, who last appeared at Silver Spring Stage in its One-Act Festival, entertained me as She of the Moon, the sister of Sister of the Sun.

Bogdan outlined some compelling reasons for directing this show: “Our heroine is separated from her mother by a society who rejects her for, among other reasons, being a foreigner. The group of players who take her in face prejudice and ridicule from mobs who fear their ‘otherness’.” Bogdan’s direction made the large cast work together fluidly. Go and see this show; it is a story of redemption and sacrifice for the greater good that young audiences, in particular, will love.

Note: Silver Spring Stage suffered a flood approximately two months ago and is seeking donations for repair. Donations can be made online or by mail. For more information about the flood and how to donate, click here.