The Second City lights up the Kennedy Center’s holiday season again this year with their new production, Love, Factually. Featuring a top-rate cast directed by Frank Caeti, The Second City delivers a hilarious take on romance via song, dance, and whip-smart comic sketches.

Cassie (Erica Elam) and Tobias (Gary-Kayi Fletcher) are employed by Hallmark to crank out treacly holiday dramas. But while Tobias buys into the company’s feel-good messaging, the cynical Cassie—whose ex-husband will remarry on Christmas Day—is intent on writing the dismal truth about love and romance. Her woeful characters are poster children for missed and mucked-up opportunities.

Created and written by Nancy Hayden, Damon Royster and Marc Warzecha, this clever, fast-paced script is filled with both nostalgic and contemporary nods to popular culture. An animated ensemble of eight actors playing more than 15 characters pull off the hi-jinks in grand style.

Erica Elam as Cassie dishes out devilish humor as her characters fumble toward their romantic goal posts. All the other talented cast members inhabit one or more alter egos.

Mary Catherine Curran does a star turn as the aging Norma and an uber-flirtatious young barista. She’s equally at home playing the spectral Jane Austen who, like the ghost of Christmas past, challenges Cassie’s Scrooge-like take on the human condition by awakening her finer senses and sensibilities.

Aaron Bliden delights as the awkward Delivery Guy who is hopelessly infatuated with Cassie. He is also the lovelorn Marc, who has to watch his best friend and would-be lover Peter marry a woman. When Bliden’s ping-ponging emotions finally overpower him, he bursts into a mock-interpretive dance that is among the show’s manic highlights.

Anne Bowles, Gary-Kayi Fletcher, Martin Garcia and Kaye Winks round out a nimble cast who excel not only with their varying characters but as an entire group. Their airport interludes are especially funny. Witness a slow-motion, strobe-lit shoving match between crowds who turn their wheeled suitcases into weapons of mass destruction. Watch a TSA agent over-exercise his power to probe—to music from The Nutcracker. The cast also flexes its improv chops with a time-honored nod towards audience participation. Beware if you’ve opted for front-row seats!

Frank Caeti and his cast are delightfully supported by Colin K. Bills’ lively scenic design, Max Doolittle’s lighting and Dan Wessels’ sound design and original music. In a production that demands ultra-quick changes between characters, Amy MacDonald’s terrific costumes propel us seamlessly among varied sketches. From Tobias’ hopelessly homely Christmas sweater and the aging Carl’s mismatched leisure wear to Keira’s narcissistic flounce, we are transported instantly into the merry-go-round of flawed but funny, selfish but heartwarming seekers of fulfillment.

Cassie greets the audience by telling them that they need not have seen the film Love, Actually in order to enjoy this holiday romp. She’s right! With its mashup of odes to When Harry Met Sally, rap music, teen talk, and 18th-century novels, there’s something to keep every one of us chortling with recognition. The Second City is always a welcome addition to the Capital area’s holiday traditions, and their production of Love, Factually is no exception.

Running time: One hour and 45 minutes, with one 15-minute intermission 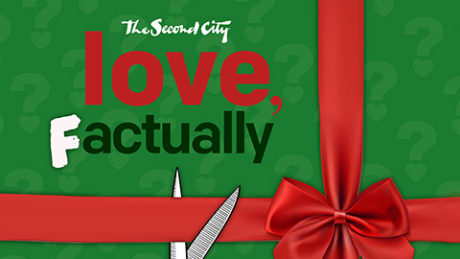