Ballet Theatre of Maryland’s production of The Nutcracker is a colorful sensation, with beautiful costumes and lovely dancing mixed with inventive lighting and a charming set. Choreographed by Artistic Director Dianna Cuatto, Tchaikovsky’s 1892 classic ballet is a delightful way to start the holidays, as well as BTM’s 40th season. 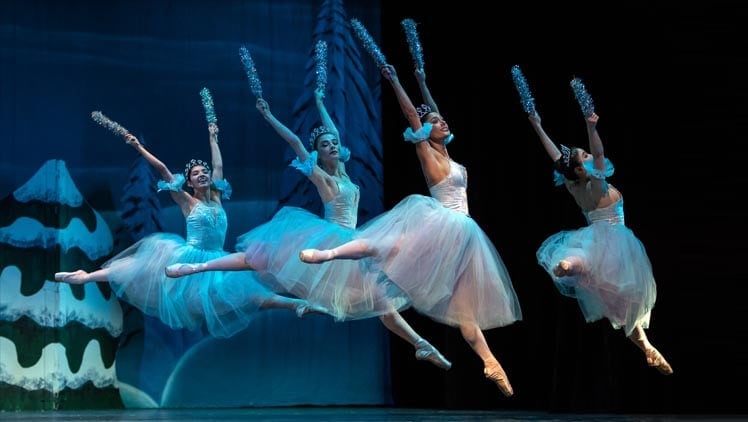 Three different casts perform on different nights. This show featured Cast 1. Nicole Kelsch radiates childish innocence as Clara. She cries as Fritz (Allyson March) snatches her nutcracker doll and stabs it. She trembles upon first seeing the rats, then tries to rush in to help the Nutcracker Prince (Alexander Collen). She shows graceful control of her legs whether slowly gliding across the stage or lifting them as she spins around, twirls, or is carried. Her dips are breathtaking.

Alexander Collen plays the Nutcracker with an elegant power. His battle with the rats is incredibly dramatic; at one point, he falls to his knees, looking like he might lose the fight. His solo towards the end is captivating as he leaps. As Drosselmeier’s nephew, he looks back at Clara with regret while leaving the party, not wanting to be away from her.

Al Kessler gives magical control to Drosselmeier. When he enters, everyone stops as if frozen. He grabs Fritz and flicks him away. During the rats’ appearance, he lifts Clara and carries her offstage, then holds her back as she tries to help the Nutcracker. In some scenes he directs Clara, slowly twisting her around. He is a powerful figure with an air of mystery.

Allyson March plays Fritz with mischievous glee, leading the boys to rush the girls with their toy weapons. He holds Clara with his sword and pokes the Ballerina Doll (Jillian Conjura) with it. Everyone crowds around him as he stabs the Nutcracker. He resists as they pull him away.

Chang Hyun Seo plays the Russian Doll and Russian Lead with pure strength, kicking out both legs at once. Jillian Conjura perfectly captures the mechanical-like movements of the Ballerina Doll. Jackson Kettell and Brittany Cavaco glide around each other like writhing snakes as the Arabian Guy and Girl, the most sensual of the show. Mark McCormack and Lindsey Hinchliffe are like a matador and bull as the Spanish Guy and Girl, swaying with controlled passion. Samantha Lewis and Clara Atsinger play the Gypsy Boy and Girl with wild abandon while Kaitlin Alter dominates the stage as the Mother Gypsy, the Gypsy Corps emerging from underneath her huge dress. Lynne Bellinger plays the Chinese Lead with controlled energy, spinning and lifting to the clapping of the Chinese Sticks as they gradually appear.

Christina Fleming is fearsome as the Rat Queen, her rats circling around the Nutcracker and his army. In her duel with the Nutcracker, she feints and parries, her sword clashing against his, and she almost has the upper hand. She comically draws out her death, shuddering and twitching on stage.

Jackson Kettell and Jillian Conjura shine with elegance as the Snow King and Queen. They glide across the stage with beautiful lifts and twirls. Conjura has excellent leg control, raising one leg up perfectly still. They are wonderful to watch.

Corinne Elkins plays the Dew Drop Fairy with pure joy, moving effortlessly across the stage. Her dips and twirls are lovely to watch.

Dianna Cuatto does a wonderful job as Set Designer, giving the scenes even more color and life. The beginning backdrop is an elegant living room with a lighted Christmas tree in the middle and grandfather clock to the side, while the front part of the stage is temporarily set off for Drosselmeier’s workshop. Large, man-sized gift boxes are wheeled out containing the Gypsy and Russian Dolls. Later, the tree grows tremendously taller while a large clock face pushes out to the center, replacing the original. The backdrop for the Ice King and Queen is a winter landscape with snow-covered trees, while the final scene is a bright, sweet backdrop with candy cane wallpaper and lollipop trees.

Wardrobe Mistress Christine Lilly has made colorful costumes that distinguish each character. Clara begins in a blue and white striped dress, later changing into a pink skirt and top, with a golden scepter and tiara as Sugar Plum Fairy. The Nutcracker wears a red military jacket and black pants, beginning and ending the ballet with a wooden-like mask. Drosselmeier looks like a sorcerer in his black cape with purple inset, red cravat, and black eye patch. The Rats are somewhat frightening with their realistic heads, some of them wearing black military jackets and white caps while the Mice have furry coats. The Russian Lead wears a long white shirt and red tights, and the Arabian Guy has a tan vest and pants with the Arabian Girl wearing a tan top and pants. The Snow Queen and King wear blue and white tops and skirts, with the Merlitons Girl in a straw hat and green shirt. The Gypsies are in red and yellow skirts, while the Gypsy Mother has a long green dress.

Lighting Design by Stacie Johnson-Leske helps to reflect the changing mood. It darkens when Fritz and the boys charge Clara and the girls. A pink light bathes the set during the Flowers’ dance. When Drosselmeier appears at the party, the lights turn low, adding to the mysterious atmosphere.

Dianna Cuatto has done a terrific job as Choreographer. The dancers easily navigate the stage and one another, creating beautiful portraits in motion. They seem to be constantly moving, whether in formations, duos, or solos, perfectly complementing Tchaikovsky’s music. Everything comes together for a magical, family-friendly show. Only three performances remain, so be sure to catch it while you can!

The Nutcracker plays through December 16, 2018 at Ballet Theatre of Maryland performing at the Maryland Hall for the Performing Arts – 801 Chase Street in Annapolis, MD. For tickets, call the box office at (410) 280-5640 or purchase them online.