Broadway Barkada is pleased to announce a concert celebrating Philippine Independence Day, featuring cast members of the US Tour Company of Miss Saigon, artists on Broadway and Off-Broadway, as well as local Washington, DC Filipino artists. Broadway Barkada will be producing the concert on Monday, December 17 in partnership with La Ti Do Productions. 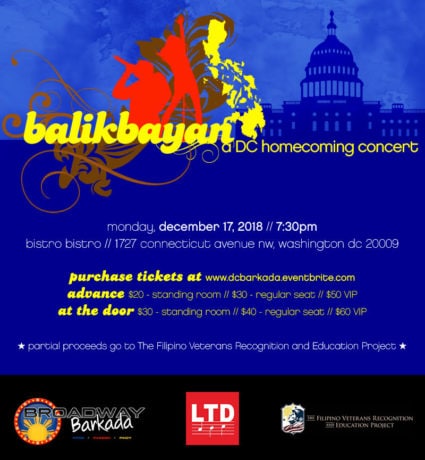 The show will be directed by Broadway Barkada co-founder, Billy Bustamante with musical direction/arrangements by Paige Rammelkamp. Part of the proceeds from Balikbayan: A Homecoming Concert will be donated to The Filipino Veterans Recognition and Education Project.

Broadway Barkada was co-founded by Liz Casasola, Billy Bustamante, and Brian Jose in the fall of 2009. The organization is a collective of professional artists whose mission is to provide a community for the Filipino artist, that cultivates talents, educates audiences, and elevates global impact.

La Ti Do strives to be a premier community of cultural and artistic diversity and inclusion through music and spoken word collaboration.

Filipino Veterans and Education Project (FilVets) is a nonpartisan, community-based, all-volunteer national initiative whose mission is to raise awareness through academic research and public information and obtain national recognition of Filipino and Filipino-American WWII Soldiers across the United States and Philippines for their wartime service to the U.S. and the Philippines from July 1941 to December 1946.

Balikbayan: A DC Homecoming Concert will be presented one night only, Monday, December 17th at 7:30 pm at Bistro Bistro – 1727 Connecticut Avenue, NW, in Washington, DC. For tickets, go online.