In 2009, Baba Brinkman debuted what would be the first in his award-winning series of Rap Guides, an imaginative mash-up of challenging scientific and philosophical theories with popular rap music. He’s back at SoHo Playhouse this winter for the tenth anniversary of his original Rap Guide to Evolution, performing in rotation with two of his other past hits from the ongoing cycle, Rap Guide to Climate Chaos and Rap Guide to Consciousness. Directed by Dodd Loomis, the solo show is part lecture and part concert, filled with complex ideas, engaging wit, and a high-energy beat that will leave you thoroughly enthralled, entertained, and educated.

Originally commissioned by Professor, Microbiologist, and Researcher Dr. Mark Pallen in 2008, as a companion piece to his book The Rough Guide to Evolution for the Bicentennial Cambridge Darwin Festival in February of the following year, the “peer-reviewed” show, which was fact-checked by scientists for the accuracy of its contents, pays homage to Charles Darwin, brilliantly applying his concepts from The Origin of Species (1859) and The Descent of Man (1871) to everything from Batesian mimicry to current statistics on homicide and pregnancy, and the post-modern history of hip-hop and rap. Brinkman, a Canadian-born descendant of Dutch Calvinists, also incorporates audience participation and his own personal experiences into the mix, including debates he’s had with his relatives on Creationism and sexual selection, his observations on the female followers he attracts, and his thought-provoking insights on how to increase human altruism through the evolutionary process (“Don’t Sleep with Mean People”), referencing the women’s sex strike, used to bring an end to the Peloponnesian War, in Aristophanes’ ancient Greek comedy Lysistrata.

Supported by Wendall K. Harrington’s visual design of background projections of quotations, graphs, portraits of rappers, and other thematically-related imagery, and music by Mr. Simmonds that accompanies his self-described “world’s nerdiest raps” and remixes of such rap classics as “Hypnotize” and “I’m A African” (noting that all homo sapiens, whether black or white, originated on the continent), the affable performer delivers an intelligent argument and a thought-provoking message, employing algorithms while acknowledging subjectivism (“no one is impartial”), and expounding the impact we can have on changing the world by encouraging “Peace of Earth” through the selection of human community and the breeding of positive reciprocity to improve our gene pool.

Brinkman concludes his Rap Guide to Evolution with a question-and-answer segment, soliciting audience feedback on the ideas he presented, which he then spontaneously incorporates into a final freestyle rap. So if you weren’t already blown away by his astonishingly fast-paced and flawless performance, sharp intellect, and natural charisma, this should accelerate your evolution into a full-fledged fan. 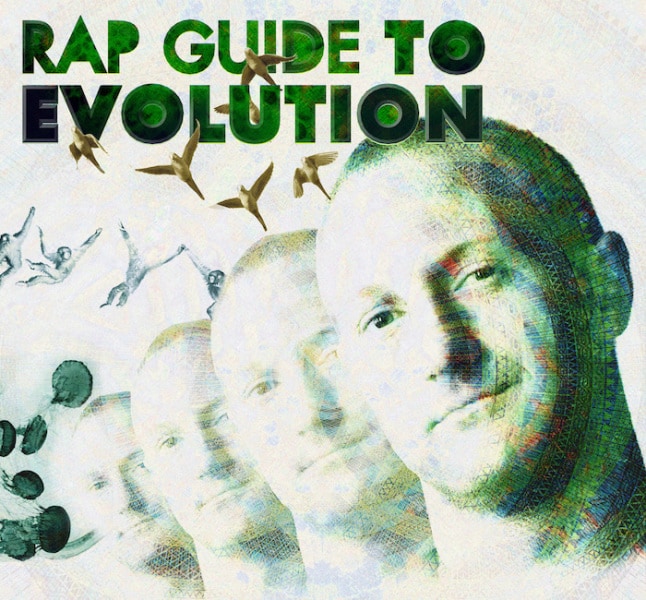