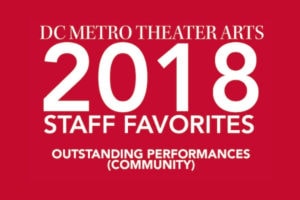 As the year draws to a close, we asked DCMTA writers to think back on the shows that left an indelible impression on them in 2018. Here are the community theater performances that made the biggest impact on DCMTA writers this year. Performers are listed in alphabetical order by last name.

Bryan Lyons Burke as Judge Turpin
‘Sweeney Todd’ at Arlington Players
Brian Lyons-Burke brings a strong, rich bass-baritone voice and significant dramatic weight to the role of the evil Judge Turpin. His “Johanna,” a tour-de-force of guilt-ridden lust, is perhaps the best rendition of the song I have ever seen. – Bob Ashby
Bob Ashby’s Review

Sophia Anthony as Eva
‘Kindertransport’ at Sandy Spring Theatre Group
Anthony as Eva is a warm and touching child who deals with heart-wrenching pain as she travels alone to a country where she does not speak the language. We feel her grief as she comes to the realization that her old life is gone forever and the fate of her family is now under the control of a monster. It is her fear, however, of being stigmatized as a German Jew, that is the driving force in the decisions she makes when still a teenager. Anthony’s scene with her biological mother in Act II will bring tears to your eyes. – Susan Brall
Susan Brall’s Review

Jim Camlek as Older Ralph
‘A Christmas Story’ at Rockville Little Theatre
The seamless live narrative delivered by Camlek as older Ralph had such panache and monochromatic inflection that every child in the audience was literally sitting on the edge of their seat and craning their neck not to miss a moment. – Mark Ludder
Mark Ludder’s Review
Nicole Hertvik’s Interview with Director Ken Kemp

Keith Cassidy as Uncle Peck
‘How I Learned to Drive’ at Dominion Stage
As Uncle Peck, Keith Cassidy will make your skin crawl, and given his role, that is a compliment! Cassidy’s Uncle Peck is a study of the patient, subtle manipulation of an entire family. His Uncle Peck is outwardly charismatic, charming and dependable, all the while crafting an expert web of manipulation that leaves the audience feeling watching in helpless horror. – Julia Exline
Julia Exline’s Review

Adam Garrison as Chief Bromden
‘One Flew Over the Cuckoo’s Nest’ at Laurel Mill Playhouse
Garrison was the hidden star of this production. He transformed the chief from an isolated individual to a flawed but socially integrated person. His character experienced the most growth in the play and was fascinating to watch. – Susan Brall

Brianna Goode as Lil’ Bit
‘How I Learned to Drive’ at Dominion Stage
Brianna Goode gives a fantastic and poignant performance as Lil’ Bit, who reflects on her past in a series of non-sequential stories that unveil a history of abuse and manipulation at the hand of a relative. Her attitude shifts from warm and convivial to flustered and angry as memories of the abuser flood her mind. – Julia Exline
Julia Exline’s Review

Bill Hurlbut as Deputy-Governor Danforth
‘The Crucible’ Silver Spring Stage
Bill Hurlbut gave an award-worthy performance as the authoritarian and frightening Deputy-Governor Danforth, who conducted the witch trials. Sporting a platinum-white, colonial man-wig, (Costume and Hair Design by Maria Bissex), Hurlbut’s dictatorial voice and icy stare made Danforth a blustering villain. For Danforth, the residents of Salem where either “with this court or against it!” – William Powell
William Powell’s Review

Holly Kelly as Dorothy
Thoroughly Modern Millie at Reston Community Players
Kelly plays Miss Dorothy, an orphan who befriends Millie. Kelly plays the role as a textbook ingenue, full of innocence and completely unaware that she is in danger. Kelly dominates the show through her presence and timing. – Kendall Mostafavi
Kendall Mostafavi’s Review

John Ingretson as Gary Peter Lefkowitz
‘I Hate Hamlet’ at Spotlighters Theatre
Jon Ingretson as Gary Peter Lefkowitz, Rally’s coattail rider, shoots energy out of every limb, his eyeballs protruding with each pelvic tilt. His portrayal of a quintessential Hollywood wannabe who makes everything seem like BIG TIME conjures up images of The Fonz, Kramer, and Johnny Fever, a trifecta of three-dimensional sitcom icons. Ingretson’s Lefkowitz is at once slimy, hilarious, dumbfounded and generous. One can imagine that he is a director’s dream. His genuine wonderment at why anyone would do Shakespeare is summed up by one of his funniest one-liners, “Shakespeare, it’s like algebra on stage.” – Mara Bayewitz
Mara Bayewitz’ Review

Annette Kalicki as Lusia
‘A Shayna Maidel’ at Peace Mountain Theatre
In a cast full of accomplished performances, the standout is Annette Kalicki as Lusia. Kalicki is so utterly convincing as a Yiddish-speaking immigrant who has gone to hell and back that you ache to think of what she must be going through night after night. In a role that could so easily slide into melodrama, Kalicki maintains a matter-of-factness about Lusia that makes her emotional moments almost too visceral to stand, which is exactly what Director Laurie Freed wants this audience to feel. – Julie Janson
Julie Janson’s Review

Omar LaTiri as Reverend John Hale
‘The Crucible’ at Silver Spring Stage
The excellent Omar LaTiri exhibited a wide character arc—from accuser to defender—as the Reverend John Hale. Hale brought down echoes of the #MeToo/due process controversy with his complaint about no man being safe from “a harlot’s cry.”
William Powell’s Review

Ensemble: Jessica Bennett, Kelli Blackwell, Ricardo Blagrove, Bryan Jeffery, Shayla Lowe, Edwin Santiago Perez, DeCarlo Raspberry, Kylie Smith and Derrick Trubyas
‘Smokey Joe’s Cafe’ at ArtsCentric
That these nine outstanding performers are in Baltimore instead of on Broadway right now is a gift to the local theater scene. As the four-member café headlining guy group, Ricardo Blagrove, Bryan Jeffery, DeCarlo Raspberry and Derrick Truby croon, harmonize, dance and charm as well as any of the famous groups of the early rock ’n’ roll era. Blagrove and Raspberry are the “hound dogs” of the foursome, with multiple romantic entwinements with patrons throughout the evening. Jeffery, hitting some crazy high notes, mostly loves his liquor—played for laughs in his solo, “Treat Me Nice.” Waiter Edwin Santiago Perez is devoted to waitress Kylie Smith (the girl has pipes), who sweetly gives in to his affection during a touching rendition of “Spanish Harlem.” Jessica Bennett and Shayla Lowe—both involved with philandering guy group singers— show off impressive vocals and distinct personalities (Bennett is fierce, Lowe sweet). Kelli Blackwell, as an amorous, spotlight-loving patron in a sequin blazer and crimped ponytail, has a diva voice and laugh-out-loud comic timing. The ladies have many standout moments throughout the show. I especially liked Bennett, Lowe, and Smith on “Don Juan,” Bennett and Smith on “Some Cats Know” (sung from the bar) and the foursome’s empowering “W.O.M.A.N.” The fellas have a touchingly pleading moment with “I (Who Have Nothing)” before a downright heartwarming “Loving You” sung by the entire cast. On that song, I was holding back tears and noticed several wet cheeks on my fellow patrons. – Cassandra Miller
Cassandra Miller’s Review

Mickey MacIntyre as Frank Merrick
‘The Curious Case of the Watson Intelligence’ at Silver Spring Stage
Mickey MacIntyre, as two versions of Frank Merrick, is so funny that one could imagine paying full price to watch him read the phone book. He stays connected and grounded in his characters, both baffled narcissists who want to punish their wives for despising them, despite the fact that both Franks are despicable. MacIntyre has a gift for dropping the f-bomb comically every time it emerges from his character’s loud, self-important mouth, getting one of the biggest laughs of the night when he screams at Josh, “Well f*** you, Deepak Chopra!” MacIntyre‘s body language and comic timing are addictive, not to mention the layers he adds to his characters that one cannot glean off of a page of script. He masterfully crafts his phrases and musings with punches, gestures, and faces that give away his deep-seated self-loathing, while evoking hysterical laughter from the audience. – Mara Bayewitz
Mara Bayewitz’ Review

James Meech as Pontius Pilate
‘Jesus Christ Superstar’ at Other Voices Theatre
As Pilate, James Meech displayed a powerful baritone voice and commanding stage presence. His voice shines in “Pilate’s Dream.” Even though his character is not onstage for much of the show, his was the performance that stuck with me. – Bob Ashby
Bob Ashby’s Review

Thom Eric Sinn as
‘I Hate Hamlet’ at Spotlighters Theater
Thom Eric Sinn plays the ghost of legendary actor, ladies’ man and alcoholic John Barrymore. He is not physically reminiscent of Barrymore, but one would be hard-pressed to find a lookalike who could top Sinn’s layered, sensual, frustrated portrayal of the late actor. He walks and talks like a Shakespearean actor making a big comeback who doesn’t want to take off his costume and go back to being a flawed human being. Sinn’s comic timing, natural delivery, and velvety smooth baritone voice make a very hard job look easy. If one tried to find a moment of inauthenticity in his performance, he/she would lose the bet. – Mara Bayewitz
Mara Bayewitz’ Review

Anna Steuerman as Daphna
‘Bad Jews’ at Vagabond Players
Anna Steuerman as Daphna was a clear standout. She vomits emotion, heart, poignancy, spite, jealousy, and righteous indignation, spitting out hilarious dialogue with the undercurrent of tragic loneliness. She garners sympathy with her multi-layered portrayal; one can see just from the look in her eyes that she is feeling pain under her abrasive “Jew hair.” She also happens to have impeccable comic timing. Steuerman was reason alone to buy a ticket to this production. – Mara Bayewitz
Mara Bayewitz’ Review

Suzanne Young as
‘I Hate Hamlet’ at Spotlighters Theatre
Suzanne Young as German talent agent Lillian Troy plays every beat perfectly, without question. She has so many one-liners that she spits out of her smirking mouth in a gorgeous blend of acerbity and self-amusement. One of the myriad examples is, when asked if she has any ideas about something or other, Lillian snarks, “Don’t ask me about great ideas, I’m German.” There is a reference to her failing health, a position Lillian denies, and Young thankfully does not milk this element of her character. Lillian is someone who doesn’t want to face death so she simply doesn’t – until she reunites with Barrymore in his apartment. This is the best scene in the play for many reasons, not the least of which is the authenticity that Young and Sinn exude as long parted lovers. These two are so genuine and compelling and could command a stage for two hours on their own. – Mara Bayewitz
Mara Bayewitz’ Review