When Nancy Pelosi accepted the gavel as Speaker of the House last week, she expressed pride at presiding over Congress during the 100th anniversary of women having the right to vote (coming in 2020). This is also the first Congress to have over 100 female members. Rising-star Alexandria Ocasio-Cortez wore all white to be sworn in as America’s youngest (she’s 29) female Congressperson. “I wore all white today to honor the women who paved the path before me,” Ocasio-Cortez tweeted after the ceremony. “From suffragettes to Shirley Chisholm, I wouldn’t be here today if it wasn’t for the mothers of the movement.”

And it’s not just in the halls of Congress that women are uniquely aware of the importance of speaking out at this moment in history. After Donald Trump defeated Hillary Clinton in the 2016 presidential election, the first modern-day Women’s March on the national mall attracted over 470,000 participants.

One new musical in development wants to remind audiences how much work it took to get women the rights we have today. 19: The Musical, by Jennifer Schwed and Doug Bradshaw, with music by Charlie Barnett, explores the work of Alice Paul, Ida B. Wells, and the suffragists who fought to pass the 19th Amendment giving women the right to vote. The story is told through music, dance, and dialogue and is narrated by the character of Susan B. Anthony.

Before we move on to the interview, let’s dwell a moment on Alice Paul, the show’s protagonist and one of American feminism’s most accomplished heroines. Oh, you say you’ve never heard of her? You are not alone. She rarely appears in history books, despite the fact that she was a primary force in earning women the right to vote in 1920 and inclusion in the 1964 Civil Rights Act.

In her 92 years (1885-1977) Paul obtained more university degrees than I could count, spent many well-publicized stints in jail for civil disobedience, and organized the 1913 Women’s Suffrage Procession that is the model for the current Women’s March. (Like today’s Women’s March, the 1913 procession depicted in 19: The Musical was marred by in-fighting. One unsavory historical note is that Alice Paul, a Caucasian, refused to let African-American activist Ida B. Wells march at the front of the parade. More on that in the interview.)

Ida B. Wells was no slouch either. Born into slavery in the waning days of the Civil War, by her early 20s she was a newspaper publisher who pioneered investigative journalism techniques and exposed the atrocities of lynching. She was a co-founder of the NAACP and ran for state Senate in Illinois after fleeing Memphis when her newspaper offices were burned down by an angry mob.

Wanting to learn more about 19: The Musical, I spoke to writers Jennifer Schwed and Doug Bradshaw by phone yesterday. Their show is currently being performed around town as a staged reading followed by a Q&A. Catch it this weekend at 1st Stage in McLean, VA and next weekend at The Hill Center in Washington, DC.

Why do you want to tell this story?

Jennifer: Doug and I had finished our last project shortly before the 2016 election. At that time, I was obsessed with two things: the presidential election and the Hamilton soundtrack which was giving me sanity at a time when politics were insane. Every time I heard that one line from Angelica Schuyler: “And when I meet Thomas Jefferson, I’m ‘a compel him to include women in the sequel,” I would cling to it.

Prior to the 2016 election, when I thought Hillary Clinton would win, I started thinking of this project as an homage to the centennial of the right to vote coinciding with the election of the first female president. We didn’t get that first female president but that just made this story feel all the more urgent.

What do you hope people take away from your show?

Jennifer: This show focuses on the wave of feminists who fought to get women the right to vote. They were young women who had the tenacity not to give up and they used their voices to change the entire country. I hope people come out of this show feeling that same empowerment and inspiration. There is a lot of political apathy in our country right now. People think their vote doesn’t count. The most important thing we are communicating through 19: The Musical is how important the vote is.

What do you want people to learn about the historical figures you portray?

Jennifer: These women embody RESIST and the resistance. I think that is such a great model for people to see. These women vanished from history. They are barely in any textbooks. Doug and I are entertainers and not historians, but it feels like a mission to tell this story. Your daughters should know what came before them and the fact that the information is so hard to find is a tragedy. People don’t know these stories.

Doug: What she said. It’s like they “were vanished” intentionally from history. My opinion is that over the years, most history books have been written by men and letting people know that strong women can get things done was very threatening to them.

How did you settle on Alice Paul as the show’s protagonist?

Jennifer: She is the star because she is the one who got the ball into the endzone for the 19th Amendment. She was by far the most militant and yet the most unseen. We felt like she was the one who hasn’t been credited for getting women the vote and we wanted to bring that name back to the public eye.

Susan B. Anthony is also a character in the show even though she passed away before the events in the play take place. Why is she there?

Jennifer: Susan B. Anthony serves as the show’s narrator. She passed away in 1906 but we brought her back as a sort of “spiritual MC” for two reasons: She is credited as the mother of the movement and she is also a recognizable name that we thought would be a good anchor for the audience.

We decided very early on in the show’s development that Susan B. Anthony would always be played by a woman of color. Like Hamilton, we did this because we believe that any story about fighting for civil rights in America should reflect the racial makeup of America.

That brings to mind one unsavory fact from the historical record. How does your show address the 1913 Women’s Suffrage Procession in which Caucasian feminist Alice Paul supported the decision not to let African-American feminist Ida B. Wells march at the head of the parade?

Doug: We have talked to a lot of historians about this question and Wells figures prominently in the musical. In the song “Put Yourself in My Shoes,” Wells and Paul face off about this exact issue. Alice Paul basically believed that a rising tide will raise all ships. In other words, she thought that it was vital not to lose the support of the Southern white women who would have abandoned the march had Wells been a leader. She thought the movement couldn’t succeed without their support. Of course, this is offensive to us today and we made sure Wells got to tell her story in our show.

Like all leaders, these women are complex and flawed and multi-dimensional. These are people who made mistakes and kept on going. That’s really important to admit. 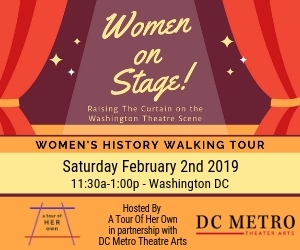 What is the significance to you of 19: The Musical being shown on the weekend of the Women’s March?

Jennifer: One sad, frustrating, and eerie thing is how similar the fight for equality still is. Alice Paul’s 1913 women’s march was the inspiration for the recent march on Washington. It all feels like it just happened, which is awful.

Do you see echoes of the divisions in the early women’s movement in today’s Women’s March, Inc. which has recently faced accusations of anti-Semitism?

Jennifer: There is a fracturing in the movement right now and I guess that is to be expected because individuals will always have different opinions, points of view and experiences that will influence who they are and how they choose to protest and seek change.

The first present-day Women’s March, in January of 2017 grew out of the emotional outpouring after the 2016 election. It was galvanized by a sense of shared pain. The next year, women began mobilizing and running for office and trying to make a difference. Now we are in year three and people are examining the movement for themselves and asking “what do I want from this?” It’s healthy to acknowledge that women are not a homogenous group, and there are going to be growing pains in any movement. What is interesting is that other groups are starting to form. Hopefully, everyone will find a place where they have a voice. Most people see the injustices and want the same goal.

19: The Musical plays Friday, January 11 and Saturday, January 12, 2019 at 1st Stage – 1524 Spring Hill Road, in McLean, VA, and Friday, January 18th, 2019 at The Hill Center – 921 Pennsylvania Avenue, SE, in Washington, DC as part of the One Woman One Vote Festival. Tickets information for all performances can be found online.

[Read John Stoltenberg’s Magic Time! column about the January 11 workshop of 19: The Musical]

The One Woman One Vote Festival: Raising 100 years of women’s voices in society, the One Woman, One Vote 2020 Festival is a collaboration with national organizations and cultural institutions to present films, concerts, exhibitions, and public events leading into the commemoration of the centennial year of the 19th Amendment passing, and the OWOV Film Festival in March 2020. The film festival event showcases documentary and dramatic films that embrace both history and contemporary issues that make a difference for all women today. The festival is being organized by Bonnie Nelson Schwartz.

Doug Bradshaw and Jennifer Schwed have been writing partners for 12 years. They formed their own production company, Through the 4th Wall, four years ago after staging an immersive production at Capital Fringe. They have written several plays and 19 is their first musical.

In honor of the upcoming Women’s March, DC Metro Theater Arts is partnering with A Tour of Her Own, a women-run walking-tour company offering women’s history tours throughout DC. Don’t miss their February 2nd tour “Women on Stage: Raising the Curtain on the Washington Theater Scene.”

On directing R&J with a Deaf Romeo: A Q&A with Christine Mosere