The oldest professional LGBTQ+ theater company in New York, TOSOS (The Other Side of Silence) addresses the enduring issues and psychological impact of bullying and homophobia in its world-premiere production of playwright Chris Weikel’s dark comedy Secret Identity at The Flea Theater. Inspired by the devastating real-life story of Tyler Clementi – a gay eighteen-year-old college freshman who, in 2010, was driven to suicide by the homophobic online posts of his roommate – this funny, insightful, and heartrending new work offers sage advice about the value of friendship, empathy, acceptance, and understanding, in an original story about a gay high-school student who creates a superhero fantasy to do battle against the intolerable actions and taunting of his tormentors. Will the forces of hatred and evil triumph? Or will he prevail, and move beyond the violence and bigotry that he and so many other LGBTQ+ youths continue to face, with the unconditional love and support of those who truly care about him?

Directed by Mark Finley (and Assistant Director Brett Douglas) with a perfect balance of wit and wisdom, Weikel’s smart and sensitive script is filled with camp humor and pop-culture references to musical theater (with a laugh-out-loud running gag about “This Is the Moment” from Jeckyll and Hyde) and comic books (including a hilarious conversation set in a specialty store for obsessive collectors). The action alternates between segments of interaction among the real characters and scenes of the imagined superheroes, in an escapist narrative being written by the protagonist JT and illustrated by Reg, his BFF since childhood. The shifts from reality to fantasy are effectively signaled by a darkening of the lights (lighting design by Paul Hudson) and a soundtrack in the style of a comic-book movie (sound design and original music by Morry Campbell), until JT is pushed to the breaking point and it all begins to merge in his distraught mind.

A terrific cast captures the archetypes and dynamics, behavior and emotions of adolescence, in a classic high-school showdown of artists versus jocks and diversity versus discrimination. Keith Weiss stars as JT, in a three-dimensional performance that ranges from lighthearted and laughing to misguidedly love-struck, from remaining silent about the persecution he suffers at the hands of his bullies to his outbursts of anger directed at the people closest to him, as he inhabits his two secret identities (the high-spirited and sometimes “geeky” gay youth that he is, and the alter-ego superhero who can fly away from the pain and persecution he experiences).

Supporting Weiss with their fine performances are Nicky Maindiratta as Reg, who, despite his unwitting comments (“That’s so gay”) and moments of conflict between them (though he is also subjected to discriminatory insults), stands by his longtime friend with true caring and devotion; and Kory Alexander Majansky as Trey, the new transfer student and object of JT’s affection – a nice guy who gets along with everyone and is as accepting and forgiving as he is attractive. Zachary Gault delivers all the venom of the hateful Mal, the head bully aided and abetted by fellow soccer players Crabbe and Goyle (CJ DiOrio and Keno Golaub), and Michael Flood and Michael Joseph Murray, as the imaginary superheroes Guise and Paladin, turn in great send-ups of the genre (Murray’s caricatural voice is especially sidesplitting). Rounding out the excellent ensemble are Jamie Heinlein as JT’s concerned mother Mrs. Shuster, frustrated by his lack of communication and unsure how to handle it; and David Leeper as the soccer coach Mr. Bachman, inclined to overlook the brutish behavior of his team and to disregard the situation and feelings of their target.

The action is enhanced by a boldly graphic set design by Scott Mancha that evokes the colorful linear style of comic strips; costumes by Ben Philipp that clearly distinguish the athletes from the comic-book fans (in tee-shirts of their favorites) and the superheroes (in shiny skin-tight spandex); and fight choreography by Michael Striano that cleverly executes the bullying and blows between the students in real time and the superhero battles in slow motion.

Secret Identity is not only great entertainment, it’s important theater that can make a difference. So be a hero; go see it and support the outstanding and relevant work of TOSOS! 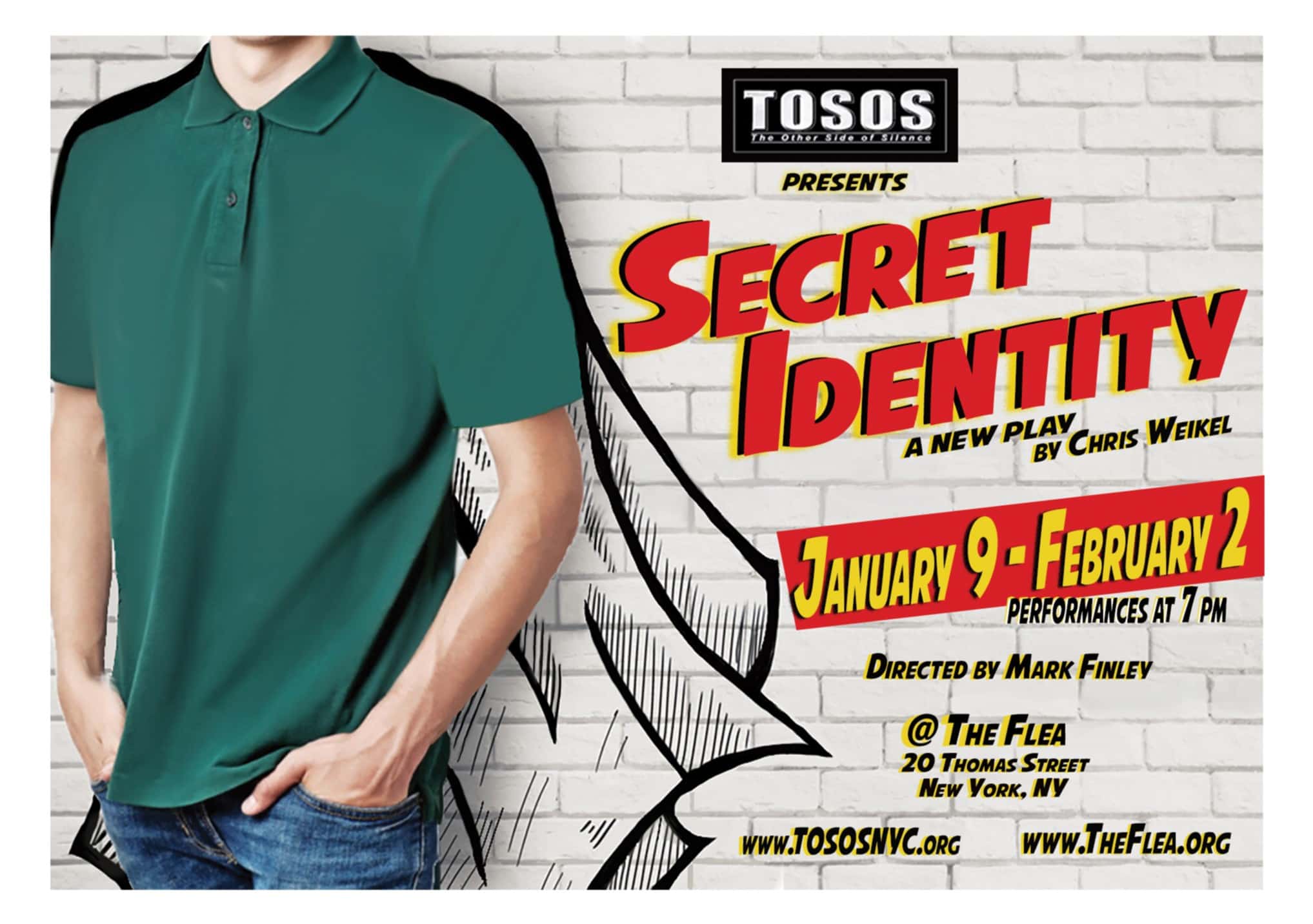