On Saturday, January 19, I had the pleasure of seeing Erica Smith’s years-in-the-making play, Stonefish, produced by The Coil Project and Greenbelt Arts Center. Director David Dieudonne and assistant director Andy De, along with a great production team, brought Smith’s script to life. Stonefish was a show I very much enjoyed, which makes me want to see more of The Coil Project and Greenbelt Arts Center in the future. 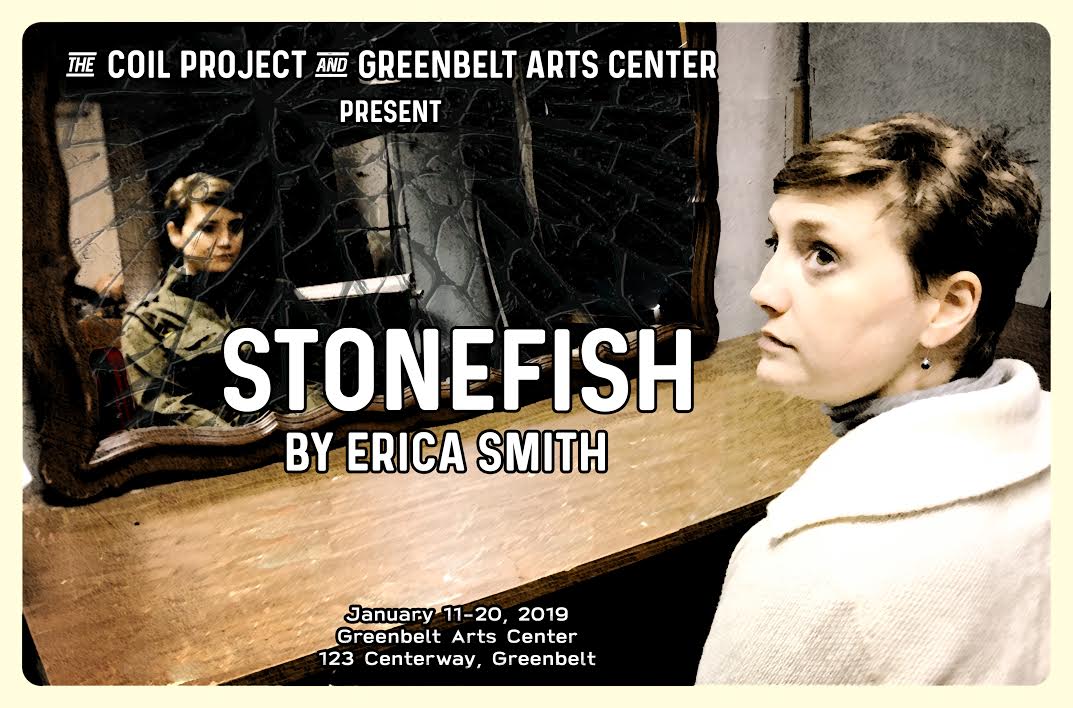 Stonefish tells the story of a family, plus one piano teacher, dealing with trauma and coming change, though it is not without its humor. The light parts accentuated the darker parts. The exact details of past and future events are dealt out in bits and pieces as the story progresses, leaving you unsure what exactly is going on, but dying to know more. The characters and relationships were well developed without a big information dump. By the end, the picture is clear, and you can almost see the new path these characters will be on. What I loved about Smith’s script was that both the action and the dialogue of the play felt realistic.

The actors continued this realism with their portrayals throughout the show, keeping the play moving with energy, and although there were moments of intense emotion, they never took it over the top. Ren Stone (Lewis) played the perfect little brother – bratty, but very lovable. Amanda Zeitler played twins Mason and Dixon. She straddled this line beautifully with very distinct choices and physicality for each character, making it clear which sibling was speaking at any time. I appreciated the little things Zeitler did for each twin like sleeves pushed up for one, left down for the other. They were little changes, but they were enough. Her performance was passionate and heartfelt.

Sean Butler (Stan) was earnest and loving as the father of the family. He had good chemistry with Zeitler and Stone. Matt Baughman (Christopher) was caring and natural as the family piano teacher and friend. One of my favorite scenes of the show was when a certain little secret comes out between Christopher and Mason and both are incredibly embarrassed. Baughman was adorably awkward, trying to be cool. It felt real. The audience loved it, and it showed a nice contrast to the seriousness of other scenes. There was also real piano playing by Zeitler and Baughman, which showed extra skill.

In addition to one actor playing two characters, there were flashbacks throughout the play. Don Slater’s lighting design helped these elements be clear by consistent light shifts when time or twin were changing. Although time shifted throughout the play, location did not. Set designer and master carpenter Joy Wyne made sure that one location was fleshed out. The family room that was the center of the action featured little touches like a blanket thrown over the couch, and floor molding around the room, which made it feel lived in.

The production elements all came together to present a genuine-feeling story. Stephanie Yee’s costume design mimicked natural, everyday apparel. I particularly liked how Mason’s and Dixon’s costumes were similar because both were played by the same actor, but they were definitely outfits that fit both characters. (And I loved the “Nevertheless She Persisted” shirt worn by Mason.)

Stonefish was a solid show – good writing, good production elements, good cast. Erica Smith, David Dieudonne, the cast, the crew, and all of The Coil Project should be proud of what they accomplished.