Brooklyn-born comedian Colin Quinn, familiar to TV viewers everywhere for his regular appearances on Saturday Night Live, Comedy Central, and MTV’s Remote Control, continues to ignite New York theater audiences with his latest one-man show Colin Quinn: Red State Blue State, playing a limited engagement at the Minetta Lane Theatre. Written and performed by Quinn, and directed by Academy Award-winner Bobby Moresco, the world-premiere monologue (which is scheduled to be recorded live by Audible for later release as an audio play) contains the stand-up star’s signature brand of socio-political commentary, as he takes a sardonic, pragmatic, and hilarious look at our country’s seemingly irreparable divide in the context of history and current events.

Under Moresco’s dynamic direction, Quinn moves intently around the stage, directly addressing the audience with an impassioned rapid-fire delivery, gesturing expressively, occasionally stopping to refresh himself with sips of water from a traditional American mason jar, and pointing out people in their seats to make insightful points about our salient differences. Before a backdrop wall of wooden slats stained red and blue in the shape of the United States (scenic design by Edward T. Morris), Quinn takes incisive aim at everything that’s gone wrong in our country, from the mistake of expanding beyond the original thirteen colonies (“Europe was our size and they separated into countries because they knew every 700 miles people’s personalities are different. Do you really think Hungary and Scotland have less in common than Utah and New Jersey?”) to the ruination of freedom of speech on the internet (“The problem with free speech is that it was never meant to go electric. It’s an acoustic art – it’s meant to be spoken”) to the failure of the two-party system (noting that “Every vote is 51 to 49. That’s too many unhappy people” and “nobody compromises. There’s been gridlock for 30 years”).

Quinn’s no-holds-barred barrage unapologetically calls out liberals and conservatives, capitalists and socialists alike (sarcastically stating, “that’s why I got into comedy. . . To conform to the status quo . . . I want a job where I reinforce mainstream opinion”) and doesn’t hesitate to  names the names of hypocritical multi-millionaire celebrities who oppose a border wall from their mansions in Beverly Hills and Lake Como (“It’s a lot easier to be charitable when your job is not on the line”). There’s something to offend everyone in his razor-sharp observations and good cause for all of us to “take a look in the mirror.”

Along with Quinn’s spot-on impersonation of an inarticulate Trump comes his sage realization that “However Trump leaves, our fundamental differences won’t leave with him. We’re still divided.” A roll-call of the 50 states, with small bulbs highlighting each area on the background map, runs a bit long, but contains some sidesplitting characterizations (e.g., “New Jersey. A bad idea that continued”) and underscores the Red against Blue divisions that now seem insurmountable, but make great fodder for Quinn’s biting comedy.

If you believe in the old maxim that laughter is the best medicine, be sure to catch Colin Quinn: Red State Blue State; it provides the antidote we all need in today’s contentious political climate. If only it could be a permanent cure for what ails us . . . but at least it offers some temporary comic relief. 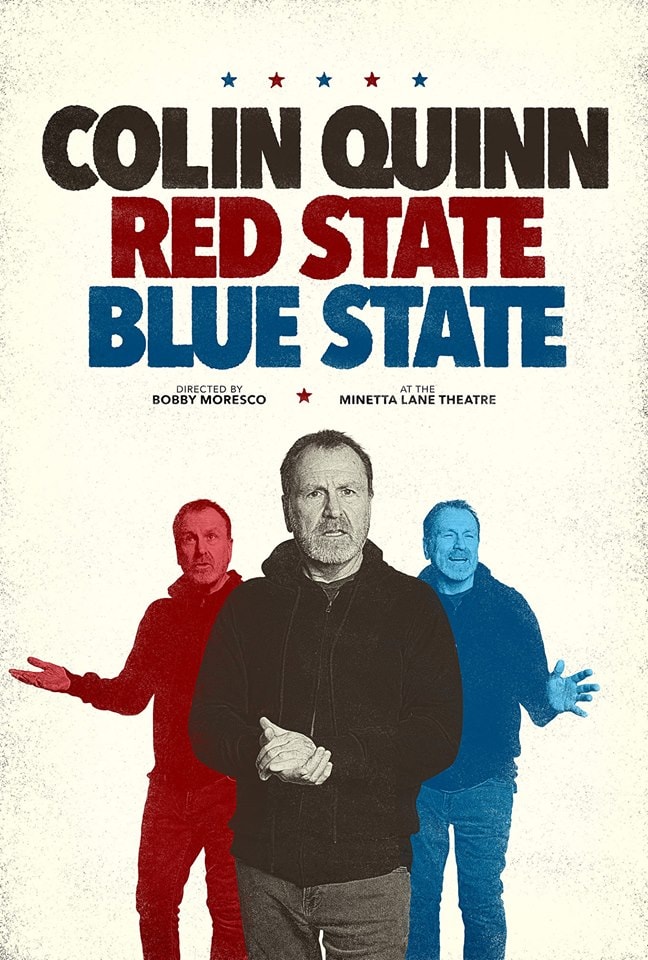