Following his appearance in two sold-out runs of Titanique, Frankie Grande has returned to The Green Room 42 with an updated revival of his solo cabaret act Livin’ La Vida Grande for two sold-out shows this weekend. Conceived by Grande, the exuberant autobiographical concert, which made its debut in 2013, highlights his life in the spotlight as a performer, producer, reality TV star, social-media sensation, and fashionista in songs and anecdotes, glitter and a loin cloth. And it’s all fabulous!

Directed by Chadd McMillan, the dynamic Grande – known to millions for his stint as a houseguest on the CBS reality series Big Brother 16 and as the real-life big half-brother of pop singer Ariana Grande – brings to the nightclub stage his impressive talents and pedigree in musical theater, having appeared in the Broadway casts of Mamma Mia! (2007-10) and Rock of Ages (2014-15), and, recently, in Off-Broadway’s Cruel Intentions (2018). But with that he also brings his larger-than-life personality and some uninhibited insight into what it takes to “Shine Bright like a Frankie,” much to the delight of his adoring fans.

A born entertainer and a real charmer, Grande – at once audacious and adorable – hits all the right notes in his selection of numbers, smart segues, personal banter, interactions with the audience, and dazzling outfits, effectively tracing the course of his career, revealing his thoughts and emotions, and always maintaining the engaging mood of the show (even screening a video of his recording, with Ariana, of Rent’s “Seasons of Love” while off-stage for a costume change). From his smooth and flawless renditions of such pop favorites as The Backstreet Boys’ “I Want It That Way” and “If That’s What It Takes” (in both French and English) by his music-crush Celine Dion, to his theatrical performances of numbers from Cabaret, The Rocky Horror Show, Hedwig and the Angry Inch, and other Broadway hits, to his spot-on impersonation of Cher (one of his “special skills”), he captivated the house with his passionate vocals, high-energy moves, and sometimes R-rated camp wit, while joking about how “nervous and shy” he is in front of people.

Grande likewise joked about his “one-man” show, in which he is not alone, but is supported by a terrific roster of guest artists, an outstanding four-piece back-up band (with musical direction by Joshua Stephen Kartes), and additional blockbuster vocals, both back-up and solo, by Dominic Crossey (masterfully singing an original number he wrote) and Marissa Rosen (with whom he appeared Off-Broadway in R.R.R.E.D., performing a hilarious powerhouse version of the musical’s “I’m Not Pregnant, I’m Just Fat”). There are also some serious moments, in which Grande graciously acknowledges his fans, friends, and family (with an occasional tongue-in-cheek apology to his ever-supportive mother, who was in attendance, for some of his more risqué language and antics), mentions the charitable work he does (including his co-founding of the non-profit organization Broadway in South Africa and his support of the Los Angeles LGBT Center), and reflects on the lessons he’s learned over the past year (now that he’s a happy nineteen-and-a-half months sober). He closes with an upbeat full cast and audience singalong to Journey’s “Don’t Stop Believin’” from Rock of Ages, leaving his audience on our feet and wanting more. And he was kind enough to give more, staying after the show to talk and to take selfies with his followers.

If you weren’t able to get tickets for this two-night run of Livin’ La Vida Grande at The Green Room 42, be sure to check the calendar for upcoming shows. You’ll be glad that you did! 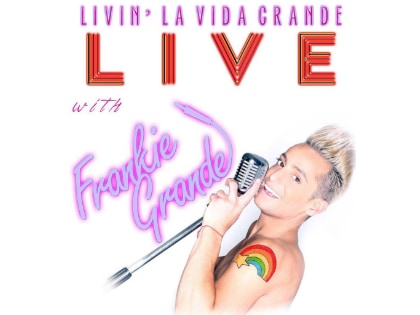