Yes, But I Have To, a new drama, will premiere at Hard Bargain Amphitheater in Accokeek, MD from February 15 to 18, 2019. 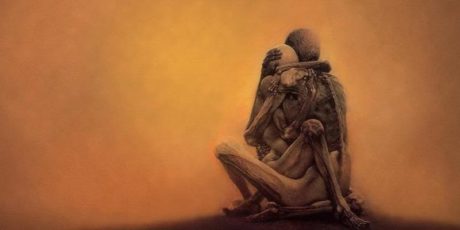 Written and directed by emerging DC playwright Addison Janney, and starring Hudson Rhotenberry, Katie Gallagher, and Noa Gelb, Yes, But I Have To is the story of a young couple, Grafton (Rhotenberry) and Emily (Gallagher), who must navigate each other, and themselves, under claustrophobic circumstances. Something has gone horribly wrong. We know only that there has been fear and travel and loneliness and death – and now winter. Temporarily stranded in an abandoned cabin in the mountains, Grafton and Emily are in the process of being distilled down to their barest selves.

In examining the repercussions of trauma and its consequences on relationships, the play raises the most universal of questions. Who are we, exactly? Are we immutable? Can we be reimagined? How do we cope with sadness and fear and anxiety? Yes, But I Have To is a unique theatrical contribution to the conversation about post-traumatic stress disorder (PTSD) and, as such, both topical and timely.

“I wrote this show because I was interested in the processes that someone, or in this case a couple, goes through to deal with their traumatic grief and sadness,” says Janney. “I wanted to put a microscope up to the panic and pain, seeing what comes out the other side. It was an exercise that resulted in something that was really personally powerful and I’m hoping that by sharing these characters’ experiences, the audience will feel that as well.”

The 110-seat Hard Bargain Amphitheater first opened its doors in the 1930s as a community gathering spot and has since become home to the Hard Bargain Players theatre company and a hub for artists and audience members to come together and celebrate theater and the arts.

“Normally, Hard Bargain Amphitheater only opens its doors during the summer months,” says Yes, But I Have To Producer Bailey Nassetta, “but thanks to a unique agreement, the play will be hitting the stage in February. One of our major goals in pre-production was securing an outdoor space. Janney wanted the weather in the script and on the stage to match in order to make the play an inherently immersive experience. After multiple attempts to secure an outdoor location in the dead of winter, we found Hard Bargain Amphitheater. I am very excited that Janney’s artistic vision has become a reality.”