The title of Topher Payne’s play is, of course, ironic. Set during the early 1950s “Lavender Scare,” a purge of gay and lesbian Federal employees coinciding with the Red Scare of that era, the arrangement is a pair of marriages of convenience. In the Greenbelt Arts Center production, Millie (Ronda Ansted) marries Bob Martindale (Jon Meeker), while Millie’s partner Norma (Susan Harper) marries Bob’s partner Jim Baxter (Win Britt). The couples live in adjoining Georgetown townhouses that connect through (metaphor alert!) a closet. They act out ’50s Washington straight society’s idea of married respectability, while sleeping with their actual partners at night. It all works wonderfully–until it doesn’t. 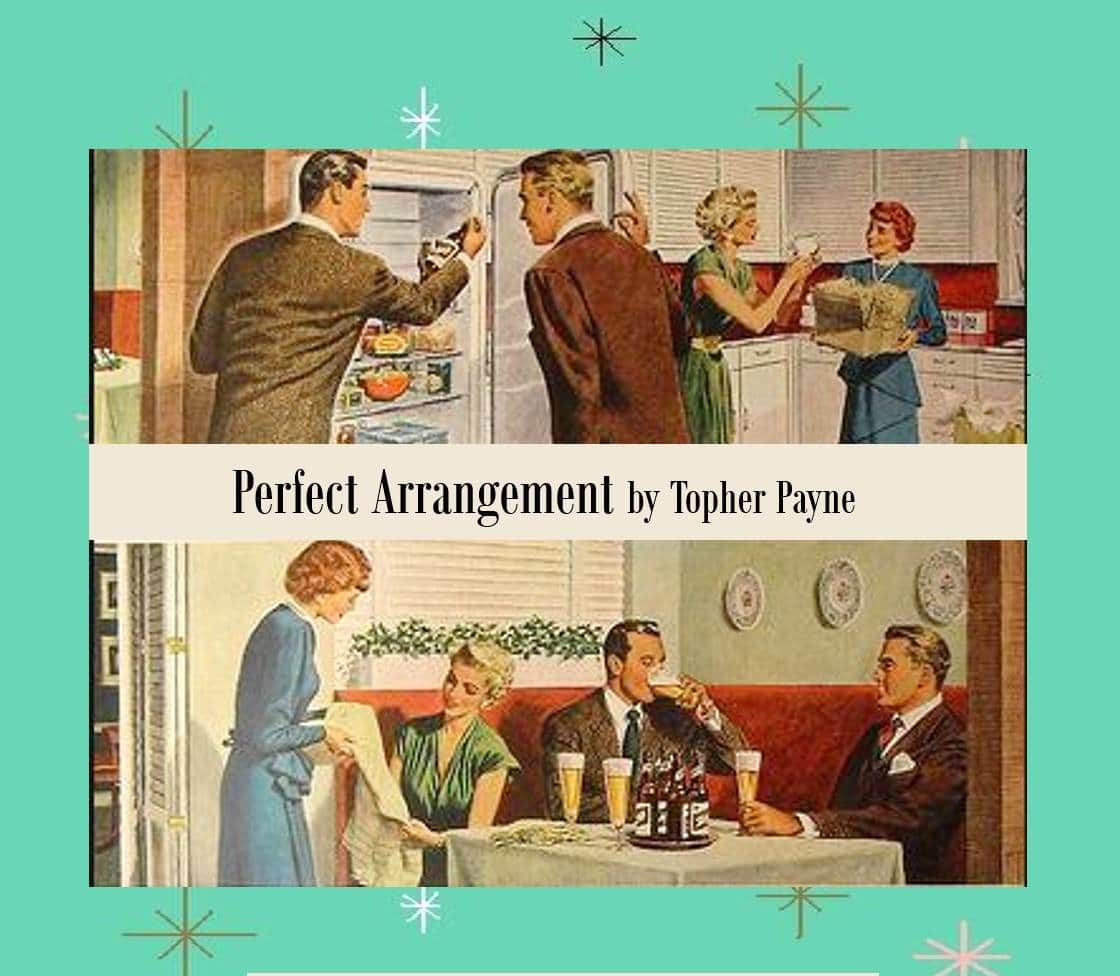 Complications begin almost immediately. Bob and Norma work at the State Department, the epicenter of gay exclusion during the Truman Administration loyalty program (some 425 gay employees were forced out before Eisenhower became President). Bob, in fact, is in charge of rooting out Reds, and his boss Ted Sunderson (Bob Singer) wants suspected “deviants” to be excised as well.

The first act consists of often quite amusing ’50s sitcom-like exchanges in which the quartet, especially the quick-thinking Millie, deflect the attention of others – especially Ted’s uber-ditzy wife Kitty (a very funny Janice Coffey), whom one can imagine as a cousin of Edith Bunker or Ethel Mertz – from anything that might give the game away. They do so, in part, by adopting over-the-top vocal and physical mannerisms that caricature straight domesticity of the time. The deception extends even to the excruciating point of Millie and Norma spending a night at the opera with Kitty, though at least costume designers Hilary Glass and Jeaneo Binney gave them all gorgeous gowns for the occasion. Costuming was a strong point of the production generally.

Keeping the arrangement secret becomes more difficult when Barbara Grant, a smart, tough, outspokenly sex-positive, broad arrives on the scene (Joy Cecilly Gerst plays the role in a manner reminiscent of ’40s-’70s actor and comedian Nancy Walker). She is not easily fooled and, as a target of the Department’s purge – it applies to “immoral” women, regardless of sexual orientation – she is in no mood to play the game. And she has something on Millie.

The screws tighten in the second act, as Bob and Norma resort to increasingly desperate and chancy measures to avoid exposure. Bob – who truly believes in his mission of protecting the country from the communist menace – employs all his bureaucratic wiles to save the situation. But he is up against forces stronger than himself, particularly Ted: Singer has a very powerful scene in act two in which he makes perfectly clear who is in charge. Bob has an even more serious problem though, in that he is the very model of the trope of the self-loathing homosexual, a side of his character that Meeker explores in vivid and painful detail as the second act proceeds.

Ultimately Barbara, unable and unwilling to save the quartet’s scheme, prepares to lead them in a stirring public crusade for gay and gender rights. They have nothing to lose; why not fight? We want to root for them, naturally. But here Payne’s script veers into anachronism. In 1950, public advocacy for gay rights in Washington was near to nonexistent. Not until Frank Kameny’s historic litigation against civil service firings of gays in 1957 and the suit-and-tie advocacy of the Mattachine Society did something of the sort surface. And the action of the play takes place 19 years before Stonewall.

Director Ann Lowe-Barrett manages well the ensemble’s often-rapid transitions from comedy to more serious moments and back again, as well as avoiding lags in pacing as the moods change. Where the production encounters some subtle difficulty is in the interactions between members of the two actual couples. In scenes between the two men or the two women without outsiders being present, there is a want of the close, habitual, daily intimacy common between partners in a long-term relationship, in body language, looks, familiar touches. Yes, they kiss at times, but their kisses can have a somewhat arbitrary emotional feel about them.

One might argue, of course, that living in hiding, continually pretending to be something you aren’t, is destructive of intimacy generally, and could bleed over into one’s “real” relationship, causing it to become unduly presentational, an unconscious echo of the charade. Still, the reality of Bob and Jim, or Norma and Millie, as a couple in a loving long-term partnership never quite lands.

One of the interesting points of the play is that, like other men of the time, Bob and Jim are exceedingly misogynistic and controlling with respect to Norma and Millie, to the point of freezing their bank accounts. It is the women who are Payne’s best-developed and most sympathetic characters.

By illustrating this chapter in American history through well-drawn characters, Perfect Arrangement provides an important service. The Lavender Scare was real and damaging, and characters like Bob were an important part of it. Ike’s Mystery Man, a recent book by historian Peter Shinkle, traces the story of Bobby Cutler, President Eisenhower’s top national security aide, who in 1953 drafted Executive Order 10450, prohibiting gays from government jobs. Shinkle comments that, in 1950s Washington, “Homosexuality was simultaneously everywhere but nowhere, suspected but not proved, concealed but then revealed, loathed and labeled a security risk – but then giggled about. Amid it all, from … deep inside the White House, Bobby and Skip [Bobby’s lover, also a White House staff member] were doing their best to serve President Eisenhower and fight Communism.”

Gay, lesbian, and particularly transgender people still have no protections from arbitrary firing in many places, and Federal government policy now favors exclusion of transgender members of the military and “religious freedom” exceptions from public accommodation nondiscrimination laws. The impulses behind the Lavender Scare remain alive and destructive.