Don’t think you’re going to sit back and observe if you show up at Urban Bush Women’s latest, Hair & Other Stories, which made its Washington, DC premiere this past weekend at Dance Place. Oh no. Read the program notes and then hear the urgency in the company dancers’ voices, when they say: “Don’t get too comfortable …. We’re goin’ on a journey.” 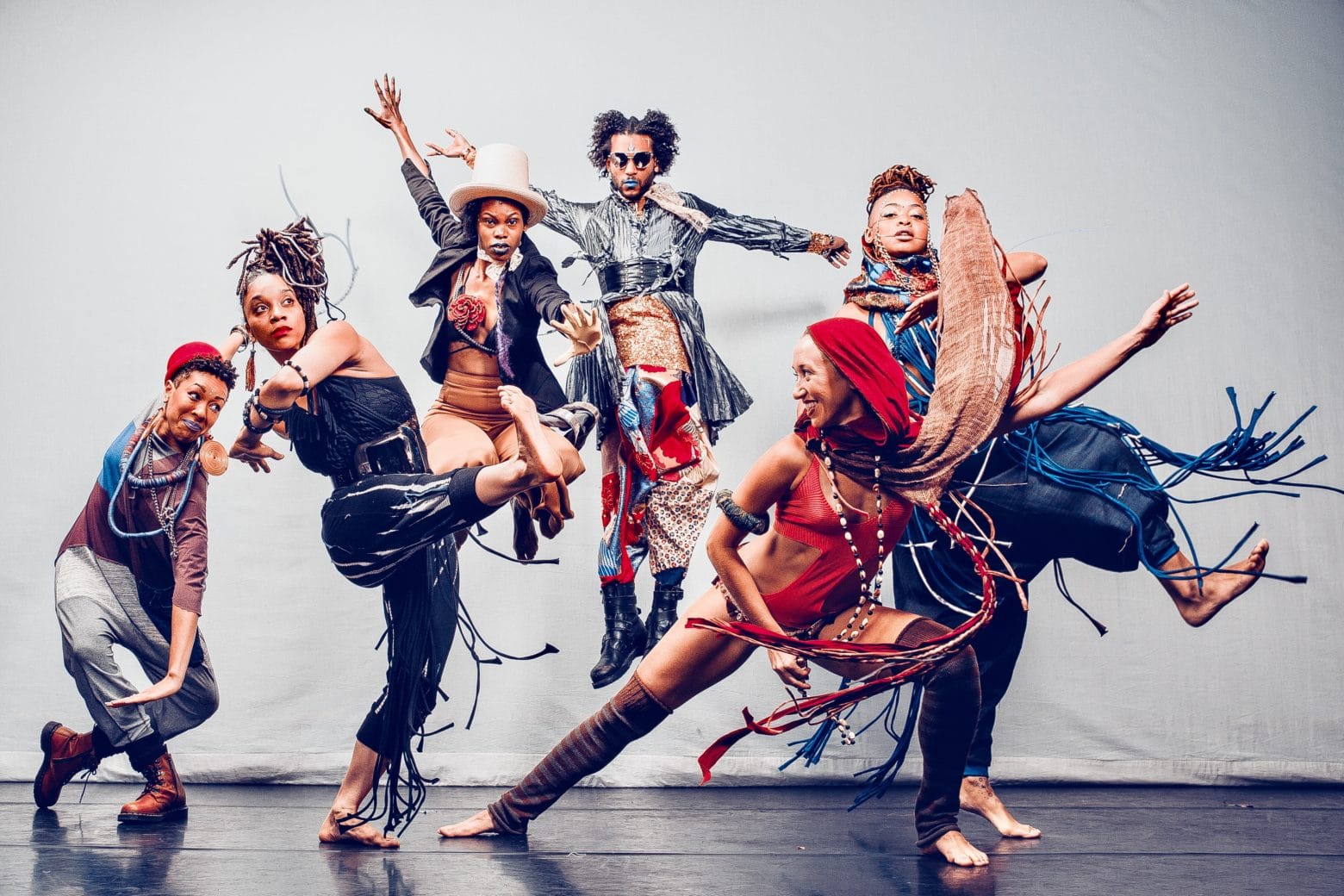 Hair – African-American women’s hair in particular, with all its baggage as “good” or “bad” – serves as the core narrative construct, but Hair & Other Stories is about much, much more. And I’ll preface this review with my own hesitation as a possessor of so-called “good” hair, typically long (though I recently got a cut) and straight, should I be writing this review? Does my hair texture and skin color – my white privilege – preclude me from sharing my point of view, my understanding? (Let me know in the comments if you have thoughts.)

The two-and-a-half-hour evening plays as part church revival, part dance party, part therapeutic reckoning, part history lesson (including a letter to Madame C.J. Walker, the first African American female millionaire who plied her trade in hair relaxers). And it is wholly and fully engaging of mind, body and spirit for those willing to hop on the train to a future that co-choreographers Chanon Judson and Samantha Speis and the company envision, one where the racist roots of the United States are reckoned with so healing can begin.

Crafted from personal narratives culled from the performers and from participants in Hair Party workshops the company held around the country asking black and other women to talk about their hair and more at community centers, churches, kitchen tables, the work throws out a challenge to all those willing to take it: re-think what you thought you knew about race, beauty, class, and privilege. But it comes with a caveat: “You don’t have to leave the same way you came in.” Think of Hair & Other Stories as a permanent haircut or dye job for your intellect and soul.

The Brooklyn-based company, which now includes men – two in this performance – was founded in 1984 by visionary storyteller and social activist Jawole Willa Jo Zollar. UBW draws on the bedrocks of contemporary and African dance, song and spoken word weaving together personal and universal narratives that wrestle with the history and challenges of being black and living in America. Throughout the two-part evening, performers address the audience, drawing from the powerful Undoing Racism workshops that the New Orleans-based People’s Institute for Survival and Beyond conducts around the country. UBW and the institute have long been collaborative partners in educational settings, but never has the fundamental and life-changing material of the workshops been so specifically incorporated into a UBW performance.

The evening begins as an all-out revival meeting. The sing-song preacherly DuBois A’Keen is joined by Tendayi Kuumba and Courtney J. Cook who take an instructive approach, easing audience members into what it means to go through life in with nappy or “bad” hair. All black women are called on to stand in solidarity for the indignities they have faced on playgrounds and on the job for having unmanageable or “different” hair. White women, too, with so-called “silky” locks, are asked to stand with the exhortation: “Let the winds of change blow in your hair.” Indeed.

Early on, a table filled with pomades, oils, gels, and combs indicates some styling might take place. A careful eye will tease out the intricate wrist and finger actions it takes to braid hair. Recollections of suffering under the hot comb for silky straight styles elicit plenty of nods from parts of the audience. The women especially, in their eclectic 21st-century boho costumes by DeeDee Gomes, appliqued with sequins, patches, fringes, and other piecemeal findings, lend a timeless quality to the proceedings. Stories and histories are drawn through embodied movement culling from the lexicon of Africanist dance – rolling shoulders, undulating spines, bodies pulled earthward, fluttering arms and articulations of torsos, pumping knees, and more recent raised fists. Moments of stillness and everyday work – sweeping, brushing, stirring motions – also braid their way into the choreographic language that draws from deeply planted roots.

At one point when the performers address colorism – the valuing of lighter skin over darker skin in the African-American community and the white community – the dancers vigorously use their hands to brush their limbs and torsos as if trying to wash away their own skin. And then, as they line up and pause, breathless after those frantic seconds, the realization comes: they have arranged themselves by skin tone, from darkest to lightest.

Throughout the swift-moving program, all are called on to move – audience as well as performers. Raise an arm, wiggle in your seat, stand in solidarity or come down to the stage, the dance floor and feel in your body the weight of racism, colorism, white privilege and prejudice as it seeps into in your bones, muscles, roots, and scalp.

Lanky powerhouse Chanon Judson tackles a vignette with a trio of “Elevator Hell Stories.” In one she walks into an elevator filled with African Americans who all want her to take a comb to her unruly hair. When the scene is repeated with white riders, they all “love” her look and reach out to touch her hair. Later, she stands on a pedestal, wraps herself in black paper and dons an oversized white top hat – recalling images of Jim Crow or Master Juba. Rooted to the pedestal Judson writhes, ripping away the paper, shedding skin perhaps, filled with taunts and pain, to reveal a renewed body … and spirit.

Joining the cast, Judson’s very young daughter, maybe three years old, moves with child-like assurance, following along, taking an adult’s hand, stepping out of a baby swaddling like a pro. Early on someone brushes down her edges, the soft baby hair at her hairline, with a toothbrush, later during a wickedly sharp scene featuring black and white Barbies in a conversation about white privilege played for adult sensibilities, she settles into her grandmother’s lap in the audience clutching a Barbie. Her moments on stage are a reminder that more’s at stake than the here and now. Judson’s daughter reinforces the Hair & Other Stories hopeful message: That she will grow up free from prejudices about hair and skin and beauty. (Parenthetically this child’s presence also shows us it’s possible to make creative work and raise a family.) The other excellent performers include Stephanie Mas, Ross Daniel (who represents an enlightened white person on this journey), Love Muwwakkil and Cyrah Ward.

It’s a wish-filled message in an evening that requires work – the hard work of reflection. Co-creators Judson and Speis call it “the urgent dialogue of the 21st century.” At Dance Place, the listening, responses, and contributions to the discussion, the call-and-response, felt active and engaged. The work itself is a conversation, one that occurs on a continuum. And one that for many will continue beyond the final bows.