A recurrent act at The Green Room 42, The Boy Band Project is back by popular demand with its Boy Band Brunch for four Sundays in February and March. So if you can’t say “Bye Bye Bye” to the hits of your favorite guy groups from the ’90s to the present, you can see them covered by a hot roster of musical-theater stars from Broadway and Off-Broadway that will “light up [your] world like nobody else” – or at least your Sunday afternoon. No, your world. Yes, they’re that good!

Founded in 2014, by members of the cast of Altar Boyz who shared a love of the genre, The BBP has grown to include an expanded roster of performers, with this week’s Boy Band Brunch featuring Jesse Corbin (Grease, Hairspray), Kevin M. Raponey (Ever After, Legally Blonde), Bentley Black (Newsies), and Luke Hamilton (Something Rotten) – the latter two filling in for the previously scheduled Nic Metcalf and Travis Nesbitt (the show’s original founder and producer) – along with the added treat of special guest star Jelani Remy (The Lion King, Smokey Joe’s Cafe).

The terrific cast delivered spot-on recreations of the popular fashions and personality archetypes of the quintessential Boy-Band conventions, with Jesse (“The Edgy One”) bringing his massive charisma to the track of the group’s leader, introducing the others, and encouraging everyone to enjoy the “brunch, booze, Boy Bands, and booty shaking.” And we did. The BBP members’ performances of the iconic songs and familiar moves, done to pre-recorded music keyed by a live DJ and supplemented with video projections from the period, paid homage to the dynamic and romantic style of the originals while highlighting their own considerable talents, heartthrob good looks, and seductive attitudes, and thrilling a few members of the audience by singing directly to them at their cabaret tables – even bringing one lucky fan on stage (signal Superfangirl freak-out!).

Among the numbers in the well-chosen set list, with killer solos, rich harmonies, and precise choreography (including Kevin’s quick nod to breakdancing), were the Backstreet Boys’ “I Want It That Way,” “Quit Playing Games with My Heart,” and a tender sit-down version of “All I Have To Give,” *NSYNC’s “It’s Gonna Be Me” and “Girlfriend,” Boyz II Men’s “I’ll Make Love To You,” and “Back at One” by Brian McKnight, which opened Jelani’s featured segment with the ensemble. Then just when you thought it couldn’t get any better, it was “time to pump it up.” And boy, did they, jumping and pumping, spinning, thrusting, and rolling their bodies to increasingly energetic renditions of such Boy-Band classics as New Kids on the Block’s “You Got It (The Right Stuff),” 98°’ “Give Me Just One Night,” One Direction’s “What Makes You Beautiful” and “Story of My Life,” and leaving the enamored crowd singing along and wanting more with *NSYNC’s “Bye Bye Bye.”

The Boy Band Brunch is the perfect way to kick off the week and to have as much fun as the performers obviously are. And there is no food or drink minimum (“or maximum!”) at The Green Room 42, so you’re free to enjoy the show with or without a meal or beverages. So “hold onto your scrunchie” and head over for an awesome time with The Boy Band Project. Word. 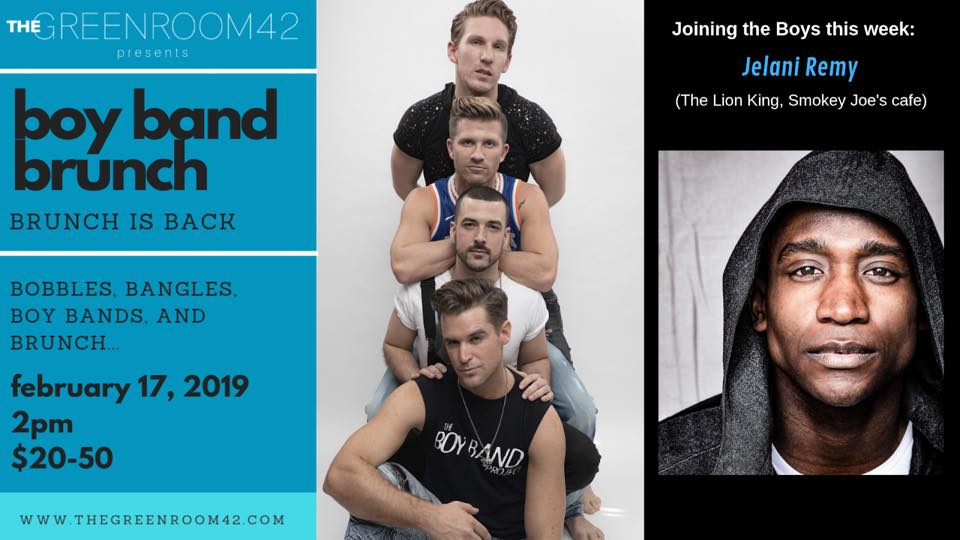