February 25 is a special day for fans of physical comedy: Commedia dell’Arte Day! Founded in 2010 in order to petition that the Italian art form known for slapsticks and masks be recognized as a World Cultural Heritage by the United Nations’ Educational, Scientific, and Cultural Organization (UNESCO) alongside other performing arts forms like Japan’s Noh and Kabuki, it’s celebrated by performances, workshops, classes and exhibits. DC’s own Faction of Fools has been an international partner in these festivities, helping coordinate and promote Commedia artists and scholars across the world.

This year, Faction of Fools is celebrating with a workshop presentation of Bravo, Zan Angelo!, a stage adaptation of author and illustrator Niki Daly’s children’s book of the same name. In this interview, we catch up with founding member and current artistic director Paul Reisman on Commedia dell’Arte Day, the Fools’ partnership with Gallaudet University, and their approach to developing new work.

Ian Thal: Commedia dell’arte is a traditional art form that underlies so much of our culture, but undoubtedly you encounter many people who have no idea what it is. How do you describe it and more importantly, convince a potential audience member to see a show?

Paul Reisman: Primarily, I talk to folks about physical comedy. Whatever the reason, all too often you usually see people’s eyes glaze over when terms like “Renaissance art form” or “masked theatre” enter the conversation. They think it’s not for them. But because of Commedia’s deep cultural roots, folks of every age are already familiar with the characters and trappings of this style, so I use as many cultural reference points as I can. Whether your way in is through the Marx Brothers, “Looney Tunes,” “The Simpsons,” “Gilligan’s Island,” “Cheers,” “Friends,” Dickens, Molière or Shakespeare, there’s a rich tradition with Commedia that people are connected to and already hold very dear. So I focus on those connections first. Additionally, I try and give them a sense that these are earnest productions. We’re not satirizing or parodying the plays we perform, but rather using the humor already within these texts to bring a truer sense of the material to the surface. Comedy doesn’t negate drama or tragedy, they’re brothers in arms. So we try to bring stories into balance in order to learn something about them — and to have a good time.

So why International Commedia dell’Arte Day?

February 25, 1545, is the date of the oldest extant document we have of a Commedia troupe incorporating as a company. This is effectively the birth of professional theatre — an industry that allows so many of us to eke out a living doing what we love. Additionally, Commedia is responsible for the first stage actresses, and an incredible tradition of stock characters and physical comedy that has been performed all over the world for centuries. So, why not International Commedia dell’Arte Day?

How long has Faction of Fools been involved in this global celebration?

Since the start. The first celebration was in 2010, in the midst of our freshman season. We were the American coordinators of the event for several years and helped spread the word and share materials to help anyone create their own Commedia Day event. In 2011, we were instrumental in getting Antarctica involved — which led to Commedia Day being celebrated on all continents that year! We have Faction events each year here in DC, from workshops and festivals to performances and lectures!

In my time as a theater critic, first in Boston and more recently in DC, Faction of Fools stands out as a professional company that fosters inclusivity through its residency at Gallaudet University, as well as the integration of deaf actors and American Sign Language into its productions. In the times I’ve reviewed your shows, the deaf performers are so well-integrated into the company that it sometimes feels silly to make note of their deafness. How has Faction of Fools been so well-positioned to take a lead in this?

One of the key tenets of Commedia is multilingualism. Whether in English, French, Italian, Spanish, German, or American Sign Language, stories of communication and miscommunication are fertile ground for comedy and introspection. As a physical language, ASL offers a visual element to these interactions that is incredibly fertile. So, aesthetically, it was a natural match for us. Each full production we present at Gallaudet utilizes student interns both on stage (and off) — and it just becomes a question of how the world of each play works. Which characters can communicate fluently with the deaf characters? Which have difficulty? As with everything else, we look for choices that help clarify story, characters, and relationships.

Beyond that, Commedia’s connection to the audience is especially important. These characters know they are living their lives in front of people. So we want to make plays that are as accessible as possible for all audiences. We’re looking to make everyone laugh together. We’re incredibly proud of the learning experience integrated casting provides for professionals and students alike. Our Gallaudet interns are often having their first professional experience working with us, and many have gone on to great success working in regional theatre and on Broadway.

Let’s talk about Faction of Fools’ Commedia dell’Arte Day event: a workshop presentation of Bravo, Zan Angelo! Faction of Fools has often presented classic works using the Commedia idiom, but in this case, you have a living playwright, company member John Bellomo, who is adapting a storybook by South African writer/illustrator Niki Daly. How has this process differed?

Well, it’s always a treat to have the playwright in the room with you. We’re currently deep in a process of discovery — in order to present this story for stage, it will grow into a larger piece than the book was, and that’s exciting. So John and the cast are hard at work exploring the ways that story can expand while staying true to the source material — and how the Commedia can be an extension of the life of these characters and their relationships. In many ways, this is a piece about how life often imitates Commedia and Commedia imitates life.

How did this project arise and what excites you about it?

John had been mentioning this book to me in conversation for years — it’s his and his son Enzo’s favorite book. I have kids too, so he would often ask if I’d heard of it — or read it yet. About a year ago, he shared with me the exciting news that he and Niki Daly had been in communication and he had the go-ahead to explore a stage adaptation. I was thrilled for Faction to get a first crack at the material — it’s a lovely story about family, art, and responsibility. And while all of our productions are family friendly, it excites me when we’re able to offer programming specifically geared toward families (as with last season’s Foolish Fairytales and 2013’s Helen Hayes-nominated Pinocchio!).

What can audiences expect to experience if they attend the workshop? How does a workshop presentation with Faction of Fools differ from more traditional play development workshops?

Because of the physical nature of Commedia, we often need to get material up on its feet to see if it works. Our workshop productions have always been geared towards giving ourselves and our audiences a sense of how we approach material. We like to give folks a window into the process in order to help them understand not only what they’re seeing but how we developed the work in the first place. Each showing concludes with an open dialogue — this is a great opportunity for us to see how the material is being received and which new directions our patrons are particularly excited in us exploring. When possible, we try and explore right in front of them, so you never know what you might see! 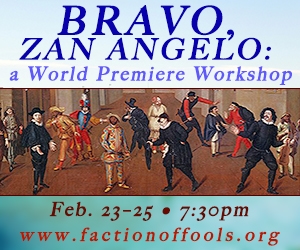