Now in its nineteenth season, Broadway by the Year – the popular series of one-night-only concerts featuring songs from the musical history of the Great White Way – opened its 2019 season last night with selections from Broadway Musicals of 1928 & 1935. Created, written, directed, and hosted by author and impresario Scott Siegel and performed by a star-studded roster, the set list included everything from the years’ biggest hits to lesser-known numbers from less-familiar shows.

The evening provided not just compelling presentations of the selection of songs, but the knowledgeable Siegel also offered a fascinating lesson in pop-culture history, interspersing the performances with fun facts, tracing notable socio-cultural events from the final boom year of the Roaring ‘20s (before the stock market crash of 1929) to the midst of the Great Depression. Did you know that 1928 saw the debut of both Mickey Mouse and sliced bread? Or that 1935 marked the introduction of the board game Monopoly, along with the openings of the WPA, Social Security, Alcoholics Anonymous, and Porgy and Bess? Well the captive audience found out, courtesy of the effervescent commentary by Siegel (who, in the Broadway spirit of “the show must go on,” appeared on stage with the support of a cane, following a severe bicycle accident that resulted in his recent nineteen-day hospitalization).

A cast of 40 brought down the house with consistently expressive solos, duets, and group numbers that created both a sense of nostalgia and a renewed appreciation of the old classics. Comprised of Broadway luminaries Erika Henningsen and Kyle Selig (Mean Girls), Quentin Earl Darrington (Once On This Island), Tony Award-winner Chuck Cooper (Choir Boy), four-time-Grammy-winner John Easterlin and Ali Ewoldt (The Phantom of the Opera), and Danny Gardner (Dames at Sea), who also serves as the series’ choreographer, the featured performers, which included rising star Emily Janes, were given top-notch period-style accompaniment by The Ross Patterson Little Big Band (with Musical Director Ross Patterson on piano, Tom Hubbard on bass, and Eric Halvorson on drums), along with the Broadway by the Year Dance Troupe (with six of its members from Radio City Music Hall).

Act I got off to an electrifying start with a rousing rendition of “Crazy Rhythm” (from Here’s Howe), with Gardner and company tapping to the beat of drumsticks and a chorus line doing high kicks. Among the other highlights were Cooper’s rich and humorous delivery of “Makin’ Whoopee” (Whoopee!), Selig’s smooth and debonair stylings on “I Can’t Give You Anything but Love” (Blackbirds of 1928), Henningsen’s lovely melodious solo on Cole Porter’s “Let’s Do It” (Paris), Ewoldt and Easterlin’s unplugged semi-operatic duet of “Wanting You,” and Darrington’s intensely emotional “Softly, As in a Morning Sunrise” (both from The New Moon), also performed without a microphone, as it would have been at the time.

Act 2 shifted to 1935, a year of financial crisis in which only ten new musicals made their debuts. But among them were the Gershwins’ Porgy and Bess and Cole Porter’s Jubilee, so despite the dismal economy, the unstoppable talents of musical theater triumphed. Cooper turned in two more blockbuster performances with “I Got Plenty o’ Nuttin’” and “It Ain’t Necessarily So” from the former; Selig did a suave sit-down rendition of “Just One of Those Things” and Gardner and troupe closed the show with a spectacular choreographed finale of “Begin the Beguine,” both from the latter. Other segments of note were Darrington’s powerhouse vocal on “My Romance” and Henningsen and Selig’s harmonious duet on “Over and Over Again” from Rodgers and Hart’s Jumbo; and the playful staging of “Got a Bran’ New Suit” from At Home Abroad, by Gardner and featured dancers Drew Humphrey, Bryan Hunt, Danny McHugh, and Kelly Sheehan.

If you missed the first installment of the season, you can catch the next three in the series of Broadway by the Year on Monday dates in March, May, and June, with selections spanning from 1943 to 2015. It’s a great way to be both educated and entertained, and to celebrate the musicals of Broadway’s illustrious past.

Running Time: Approximately one hour and 55 minutes, including an intermission. 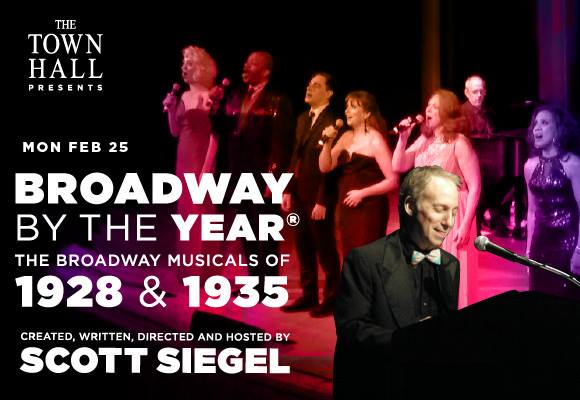