Inaugurated in 2011, and now celebrating its 50th cycle of brand-new ten-minute episodic plays, SERIALS @ The Flea – originally created by Dominic Spillane and Stephen Stout in collaboration with Jim Simpson – is a rapid-fire laugh-out-loud late-night competition series featuring weekly installments by members of the SERIALS Writers Room – some of the funniest emerging playwrights on today’s theater scene – directed with an eye on the outrageous and performed by The Flea Theater’s uproarious resident company The Bats. The premise of the hilarious ongoing series is that each week, the audience is offered a selection of short works from which to choose its top three favorites. Those garnering the most votes return the following week with a new installment; the remaining teams will also come back, but with completely new and different storylines – all of which will again be up for audience voting for future rounds of performances.

Opening the latest cycle of cutting-edge comedy this week are four voting-eligible works: the inaugural episodes of My Father Is a Serial Killer by Chloé Hayat and Are We Done Here? by Liz Morgan; and returning favorites by Matthew Minnicino (Episode 3 of Cast Party: Fun Home) and Jessica Moss (Episode 2 of Agnes Bloodfeldt Presents The Feminine Condition). They are joined by Lily Houghton’s one-week-only submission Human that Dies and the finale of Niccolo Aeed’s Why Shouldn’t I Eat You Right Now?, all interspersed with self-referencing sketches on The History of Serials written by Brian Kettler.

Produced by Matt Stango and Madeline Mahoney, the zany themes, chock full of pop-culture references, comprise Morgan’s, Houghton’s, and Minnicino’s experiential satires on the nightmare of actors’ auditions; Aeed’s riotous dinner party of anthropomorphized mice and snakes; Hayak’s bloody parody of the horror genre in middle America; and Moss’s sensational send-up of high-school bullying (an audience, and personal, favorite that is guaranteed to move on to the next rounds). Contextualizing the SERIALS and punctuating the presented works are Kettler’s sidesplitting skits recounting the evolution of the Off-Off-Broadway series, from the less-than-warm reception the creators received when first pitching the idea, to the minimal funding and rehearsal time they were given, to The Flea’s relocation to a more upscale venue (humorously noting the new gender-neutral restrooms). It’s all a lot of fun on a limited amount of money, with clever props, costumes, lighting, and sound design that put every well-earned dollar to remarkably good use.

If you love creative new alternative theater that may be low in budget but is high in wit and talent, and want to be a part of the decision-making process that determines which stories will continue in upcoming weeks (“5 PLAYS GO IN. 3 PLAYS COME OUT. YOUR VOTE DECIDES”), then don’t miss your chance to see SERIALS @ The Flea. And be sure to arrive at 10:30 PM, for a half-hour of live music and to cash in your free drink ticket (included in the reasonable price of admission) before the show begins at 11. You’ll be glad that you did! 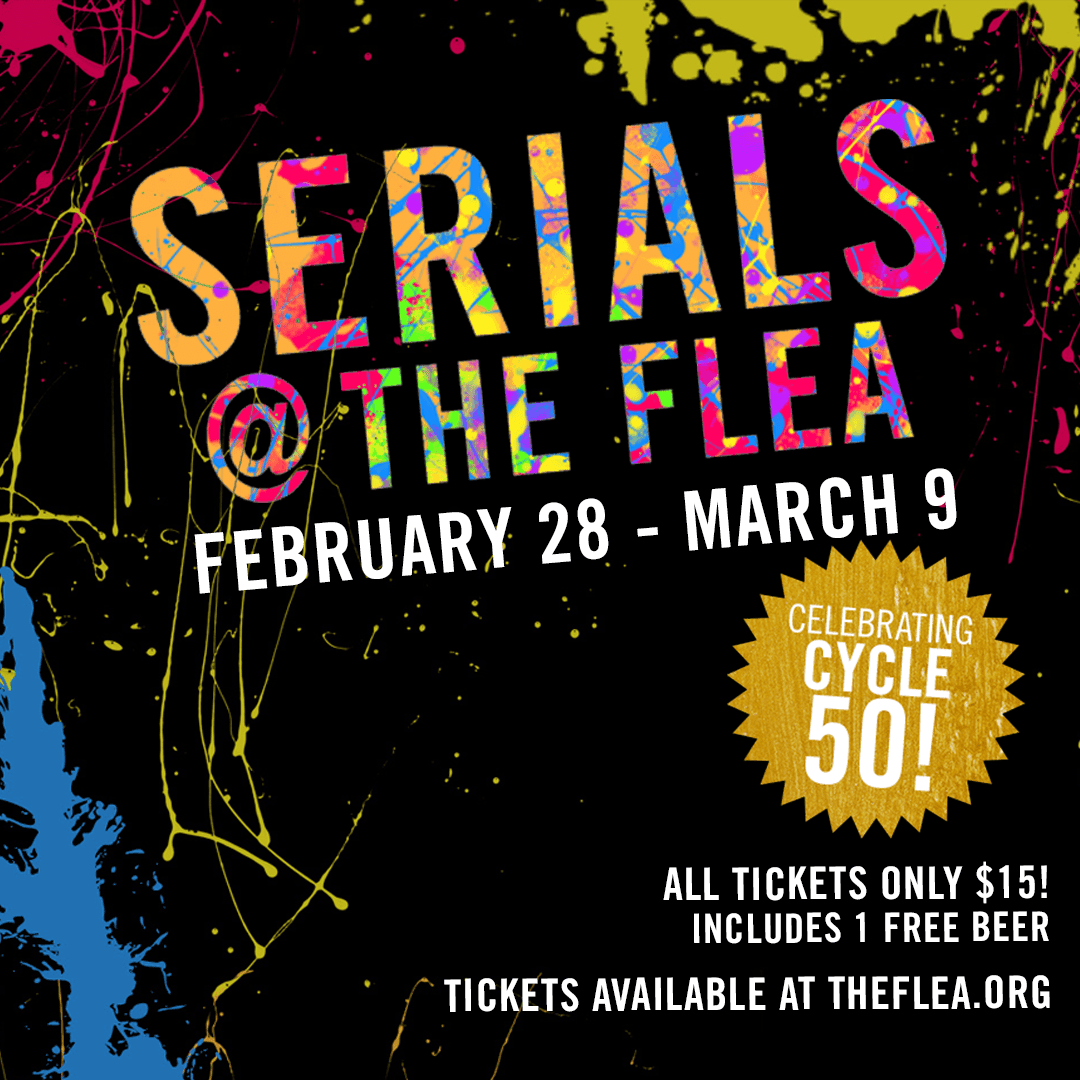