Before the advent of purpose-built theaters in Elizabethan England, the coach yards, covered balconies, and galleries of inns and taverns – historical forerunners of the British pub – had served as performance spaces since the early Middle Ages, when itinerant troupes of actors and musicians performed at the inns where they stayed, ate, and drank. They remained common in Shakespeare’s time, with the old-style enclosed and galleried inn-yard theaters then serving as the architectural model for such newly constructed venues as the Globe Theatre, leading to the decline of the pub theater until its popular revival in England in the 1970s.

New York Shakespeare Exchange pays homage to that long-standing English tradition of inn-theater and drink with ShakesBEER, the city’s oldest Shakespearean pub crawl. In addition to the themed presentations of scenes from The Bard’s canon and other classics in a sequence of four different bars, ticketholders get their choice of a select beer, wine, or cocktail at each, for one single price of admission. According to Ross Williams – the company’s Founding Artistic Director and Co-Producer (with Sarah Kinsey) of the current offering – the series began seven years ago as a fundraiser, to generate money for NYSX’s productions and programming (including The Sonnet Project, comprising short indie films of Shakespeare’s poems, created by directors in NYC, the US, and internationally). Because participating members of “the community felt like they had a day of real Shakespearean experience,” Williams said, “we kept it going” as a great way for audiences to have fun, while being introduced to the company’s specialty of “inventive” and “uniquely modern” interpretations of the revered playwright’s time-honored works.

This month’s installment of ShakesBEER, presented on March 2 and 9, consists of brief performances of romantic battles from Shakespeare’s famed comedies As You Like It, Twelfth Night, and The Taming of the Shrew, along with Molière’s Tartuffe (first produced at Versailles in 1664). Beginning at 2:30, with a check-in at The Dubliner – a replica of an authentic Irish pub on historic Stone Street, in New York’s Financial District – then moving on to Route 66 Smokehouse, Killarney Rose, and The Full Shilling, audiences enjoy immersive snippets of rowdy scenes of love served up with copious amounts of drink, conversation, and laughter in a relaxed communal atmosphere intended to make the classics more immediate and relatable. Judging by the reaction, with enthusiastic shouts of “Huzzah!” from the audience at the conclusion of each short scene, the format works, and whets the appetite for more (so be advised that a greater amount of time is spent on socializing than on the performances, each with a running time of under fifteen minutes).

Directed by Lynnsey Ooten (As You Like It and Tartuffe) and Kelly Monroe Johnston (The Taming of the Shrew and Twelfth Night), the engaging ensemble (Brandon Garegnani, Anaseini Katoa, Sarah Kinsey, Fernando Lamberty, Kathryn Metzger, Deanna Supplee, and Williams) moves around the audience, climbs atop the bars, tables, and barstools, and delivers the Elizabethan language and translated French verse with full-out fluidity, naturalism, and emotion. Wearing present-day street clothes and employing just a few simple props, the lively team of skilled actors succeeds in capturing the intended spirit of raucous humor inherent in the well-chosen excerpts.

If you already love Shakespeare and the classics and want a different way of experiencing them, or would like to be introduced to tantalizing bits of the historic masterpieces in an informal setting with your favorite pint, head on down to FiDi, get your drink (or four!), and support the work of New York Shakespeare Exchange with ShakesBEER. It’s a congenial way to spend the afternoon, and you’ll be out in time for dinner and/or a full-stage production that night. Huzzah! 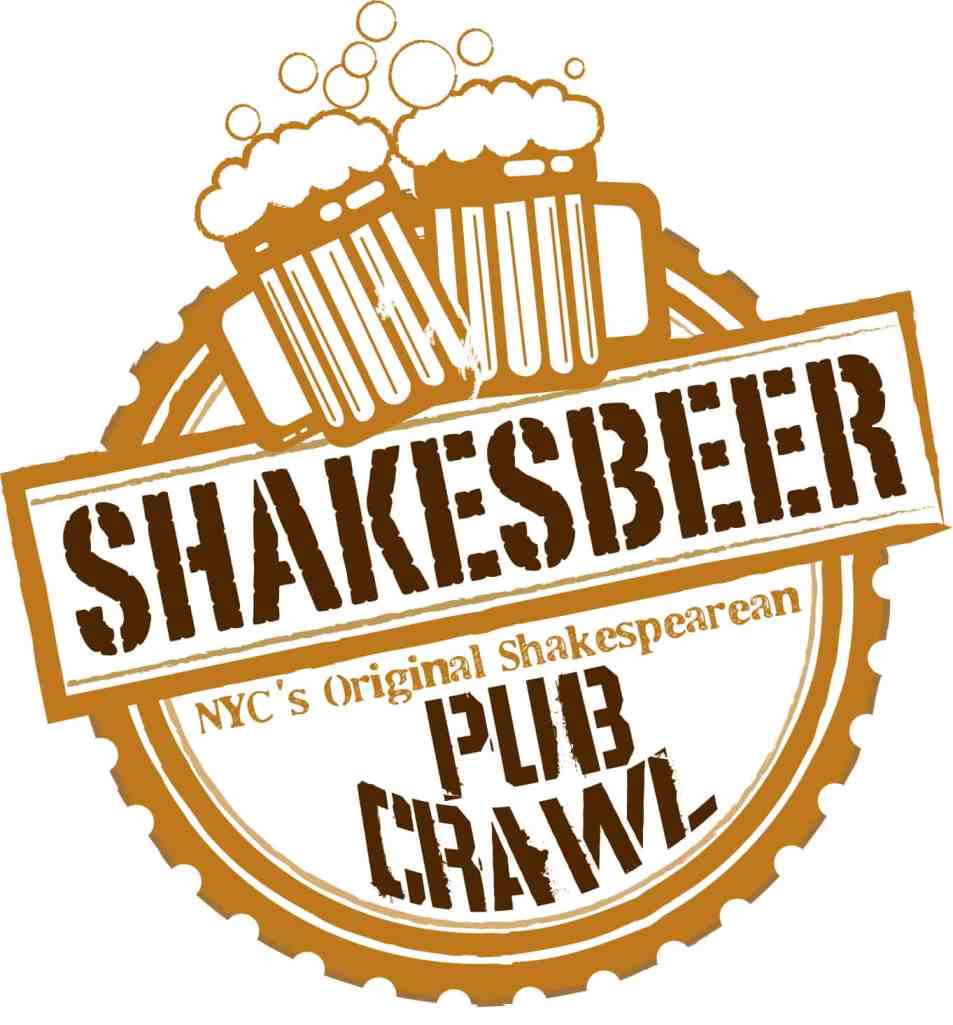