Just when you thought it couldn’t get any better, Be More Chill has. Following its sold-out extended run at The Pershing Square Signature Center, the sensational high-school musical that defines teen life and sci-fi fantasy in the digital age has upgraded to Broadway’s Lyceum Theatre (and already broke house records in its first week of previews). With the entire Off-Broadway cast intact, the volume amped up, the design freshly brightened, and the narrative slightly tightened, the show – with vibrant direction by Stephen Brackett, energetic choreography by Chase Brock, and ebullient music direction by Emily Marshall – is even more exuberant, even more colorful, even more fluid than ever before, but still as funny and moving and insightful and connected as it always was.

For anyone who doesn’t know the story (where have you been for the past year?), the cult-hit-gone-viral by Joe Tracz (book) and Joe Iconis (music and lyrics), adapted from the 2004 novel by Ned Vizzini, recounts the coming-of-age story of “Loser Geek Whatever” Jeremy Heere in his desire to be popular by ingesting a SQUIP – a mini-computer-in-a-capsule that implants itself in his brain and advises him on what to say, what to wear, and how to act, to be considered cool by his classmates and “A Guy That I’d Kinda Be Into” by his theater-nerd crush Christine. But after dumping his longtime BFF Michael, insulting his severely depressed father, and making it with the hot girls Brooke and Chloe (but still not with Christine), the treacherous SQUIP begins to fail, infecting the entire school and wreaking systemic havoc that must be repaired and rebooted.

Showing unfaltering confidence and comfort in their familiar roles and an indefatigably powerful command of their vocals and moves, the whole ten-person cast brings it on full force, capturing the recognizable personalities, interactions, and challenges that teenagers universally face, with the language, styles, attitudes, and social-media savvy that are specifically now, and a zany nod to futuristic fantasy that might not be too far off. Will Roland stars as the bullied and desperate outcast Jeremy, who laments his lack of social status (in the pained and wistful “More Than Survive”) before transitioning into a “more chill” but inauthentic version of who he really is, after yielding to the SQUIP’s out-of-control control (“Voices In My Head”). As his rejected but smart and steadfast best friend Michael – the other half in their harmonious “Two-Player Game” and in their shared love of video entertainment (be it gaming or porn) – George Salazar not only wows with his irresistible portrayal, but elicits tears with his empathetic rendition of “Michael in the Bathroom” – a lonely, isolated, and heartrending panic attack at cool-guy Jake’s big Halloween party (to which he wasn’t invited) that is brimming with pathos and provides a singular highlight in a show filled with highlights (and in the entire Broadway season).

Also delivering the hilarious and heartfelt whirlwind of adolescent vitality, angst, and high-school politics is an outstanding supporting ensemble. The featured actors include the endearing Stephanie Hsu as the delightfully effusive Christine (“I Love Play Rehearsal”), who, though hyperactive, ultimately becomes grounded; Jason Tam as the commanding personification and looming presence of the SQUIP (who directs Jeremy to “Be More Chill”); and Tiffany Mann as the gossip-girl Jenna Rolan, whose powerhouse voice leads the female ensemble (including the guys in drag) in a sidesplitting high-voltage round of “The Smartphone Hour (Rich Set a Fire)” that goes viral.

Jason SweetTooth Williams turns in effectively diverse appearances in the multiple roles of Mr. Reyes (the school’s unfulfilled drama coach who creates a wacky zombie version of a Shakespeare comedy for the school play); the SQUIP-pushing Scary Stockboy at Payless (a reference that might need an update, after the recent bankruptcy and closing of the shoe-store chain); and Jeremy’s father Mr. Heere, abandoned by his wife and subsequently averse to getting dressed, much to the dismay of his son (“The Pants Song”). And playing the popular kids with a perfect balance of humor and bravado are Katlyn Carlson (Chloe), Lauren Marcus (Brooke), Britton Smith (Jake), and Gerard Canonico (Rich), all with secret issues and insecurities of their own.

Iconis’s score, performed by a terrific eight-piece band (with orchestrations by Charlie Rosen), is an apropos mix of Broadway rock, sensitive ballads, and eerie techno music that expresses the changing moods of the characters and their experiences. The themes of present-day high school, digital-age pop culture, and science-fiction fantasy are brilliantly underscored by Beowulf Boritt’s clever and fast-moving scenic design (employing the recurrent shape of a cell phone for the set’s series of proscenium arches, windows, and posters); Alex Basco Koch’s eye-popping projections of circuit boards, computer formulas, and digital imagery; high-voltage neon-hued lighting by Tyler Micoleau; emotive sound effects by Ryan Rumery; and amusing costumes by Bobby Frederick Tilley II that define the incisive array of archetypes to sidesplitting perfection.

But it’s not just the youthful spirit and engaging sense of fun that make Be More Chill a hit. It’s also the important message for kids to be themselves, to develop a sense of self-worth, to stop the bullying, and to connect with others around them, even if they seem different on the outside.

In the words of Be More Chill, this show is “lit AF,” so get your tickets while you still can and be a part of the Broadway premiere of what is surely destined to become a 21st-century classic and to number among the all-time favorite musicals of the Great White Way. The theater is NOT dead, it is very much alive and relevant to a new generation that resurrected it on social media and triggered its path to this spectacular new upgrade. 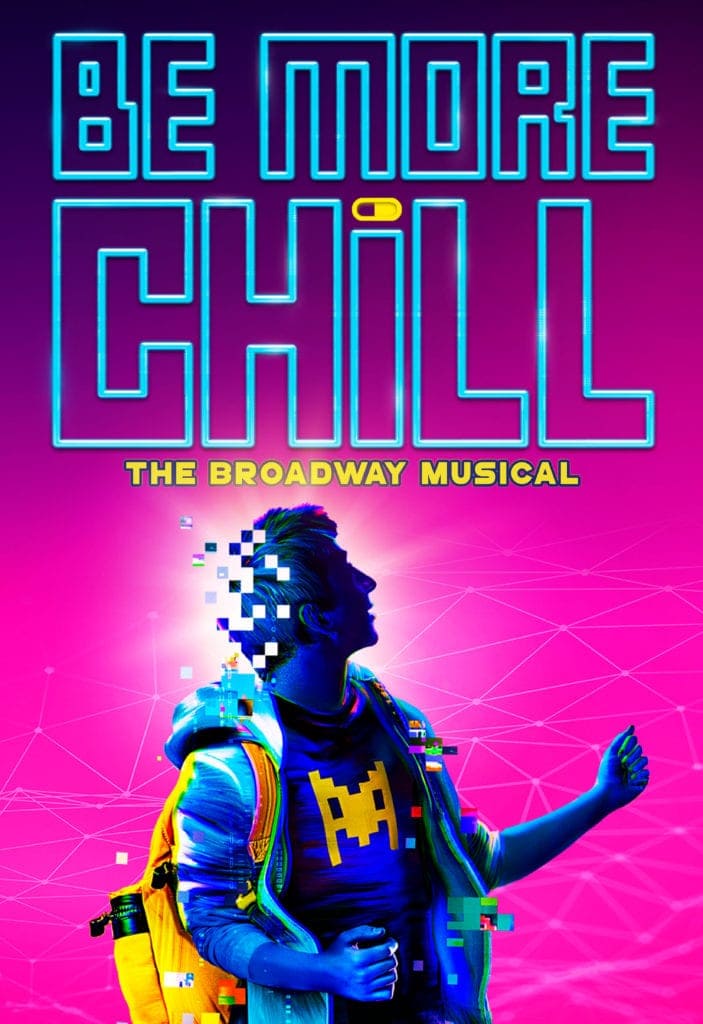