Winner of the first Tony Award for Best Musical when it made its debut in 1948, Kiss Me, Kate has a long history as one of the great Broadway classics by the legendary Cole Porter, who wrote the music and lyrics. But with the social advances of the past 70 years, what was considered funny and acceptable in the mid-20th century has since become glaringly outdated from a gender-based perspective. As a result, Roundabout Theatre Company’s current production, now playing a limited engagement at Studio 54, presents a slightly revised version of the iconic musical comedy from the Golden Age of Broadway, with updates to Sam and Bella Spewack’s original book and Porter’s lyrics by Amanda Green (credited in the program with “additional material”), in which the central battle of the sexes is fought on a more level playing field, in consideration of today’s audience and women’s ongoing quest for equality. And huzzah! It’s golden again.

Still here is the familiar story of a play-within-a-play, in which a divorced couple, Lilli Vanessi and Fred Graham, is cast as the leads of Kate and Petruchio in his musical production of The Taming of the Shrew, with the Shakespearean characters’ attraction and antagonism, performed by the exes on stage, intertwined with, and mirrored in, their off-stage mercurial relationship and fiery interactions. Added to that are the subplots of an assortment of other dalliances (including multiple ones with a stereotyped floozy who sleeps her way into the show and is rewarded with diamonds for her services – a throwback to times before the #MeToo and #TimesUp movements) and a pair of rough but well-read gangsters sent to collect a debt, and the musical rom-com retains the essence of its mid-century themes, attitudes, and humor, combining high-brow wit (including clever references to the Bard) and low-brow slapstick (with Lilli/Kate getting in plenty of kicks in her continuing altercations with Fred/Petruchio).

Luckily for Broadway audiences, it also once again offers Porter’s blockbuster score (with music direction by Paul Gemignani, orchestrations by Larry Hochman, and dance arrangements by David Chase), enlivened with breathtaking choreography (by Warren Carlyle) and performed with inexhaustible pizzazz by a dazzling cast, under the vibrant direction of Scott Ellis. Kelli O’Hara, Will Chase, and Corbin Bleu provide the star-power names for Roundabout’s production, delivering the comedy and heart of the narrative and wowing with their extraordinary talents in song and dance. Bleu revitalizes “Bianca” (not previously considered one of the more memorable numbers in a musical filled with mega-hit show tunes like “Always True To You In My Fashion,” “From This Moment On,” and “Brush Up Your Shakespeare”) with a high-energy tap routine that won’t soon be forgotten, and (along with Will Burton and Rick Faugno) gives a blatant new sexual charge to “Tom, Dick, or Harry” with pelvic thrusts and grinds, and an emphasis on “Dick.” Chase brings his share of the screwball humor to the raucous and rollicking retro romp, and O’Hara reaffirms her place among the best voices on the contemporary stage, bringing her pure rich soprano to “Wunderbar” and “So In Love,” her comedic sensibility and timing to “I Hate Men,” and her flawless coloratura to the titular “Kiss Me, Kate.”

And the large ensemble of this show is not mere background filler. The top-notch company delivers all the powerhouse vocals and moves, from Derrick Cobey’s robust and resonant opening verse of “Another Op’nin’, Another Show” to the group harmonies and incendiary dancing in “Too Darn Hot,” led by James T. Lane, fluidly combining jazz, ballet, tap, swing, the jitterbug, and high-flying acrobatics, and setting the house on fire with one of the most exhilarating and memorable showstoppers of this, or any, season in Broadway’s illustrious history.

Historicizing sets by David Rockwell (with backstage riggings, dressing rooms, brick walls and multi-level metal fire escapes, and painted stage curtains and coulisses, enhanced  by Donald Holder’s beautiful soft-hued lighting) and lavish period costumes by Jeff Mahshie (including, ‘40s-style zoot suits for the gangsters, glamorous dressing gowns for the stars, and sumptuous Elizabethan gowns and tights for their Shakespearean performance, with coordinated hair and wig design by David Brian Brown), recreate the look and feel of the bygone eras.

Roundabout’s smartly-tweaked presentation of Kiss Me, Kate gives new life to an undeniable Broadway classic, while subtly reminding us of the progress women have made, since Shakespeare’s time and the 1940s. Win/win. Don’t miss it. 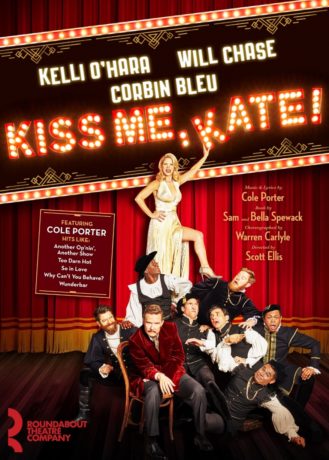