The Second City: It’s Not You, It’s Me gets laughs. Sort of like the laughs an adult might give a naughty, inappropriate child. The show – a re-envisioning of sketches by the Canadian comedy troupe Second City, whose members included superstars like Tina Fey, Stephen Colbert, Steve Carell, Gilda Radner, Bill Murray, comes close to being an entertaining evening. 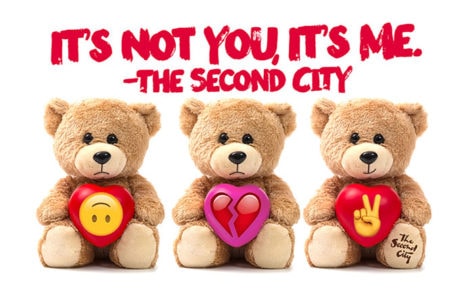 It has its moments, like when Olivia Nielsen and DC’s own Asia Martin conclude a scene with a song and dance about only two girls. In another scene, Ben Larrison sits with his back to the audience most of the time as Terrence Carey and Griffin Wenzler share a dialogue. Larrison occasionally faces the pair and shares fragments from out of the blue. Carey’s and Wenzler’s reactions are spectacular adding to Larrison’s delivery.

Some scenes are hilarious. The cast is renowned for its improv abilities, but comedic cowardice and shallowness keep the stars from shining in this show. The show would have worked in the 1970s, but we’ve come a long way baby.

Leaving, one must wonder what Director Molly Todd Madison was thinking when putting the production together. The overly foul-mouthed production lost its effect after the first few mentions and turned into a juvenile sexual fantasy for adults.

Jerry Seinfeld is a comic genius. He works to avoid sex and cussing in his act. He works with material far better than It’s Not You which promoted itself as being about love and relationships. Second City should get a clue.

Here in the 21st century, instead of laughing at “love,” as promotions promise, It’s Not You mocks sleeping around and sexually transmitted diseases. That’s not funny anymore. Redd Foxx, Lenny Bruce, George Carlin, and Richard Pryor used foul language for shock value and cheap laughs, back in the day. But it is a new day. If “fuck” was taken out of Sarah Dell’Amico and Wenzler’s dialogue, they would have little to say. That’s a shame because they have wonderful pedigrees and are probably good comedians.

In one skit involving all six actors, Dell’Amico plays a little girl who often leaves the stage shouting “god damn it.” This only works because the child is mirroring what her parents have taught her. If this reviewer never hears “fuck” or god damn it” again after surviving this performance it will be too soon.

Instead of treating religion or politics as material, the cast targets evangelicals, Trump and the alt-right. The focus moves from comedy to bigotry, but because their crowd probably shares such social views, Second City gets away with pecking at the low-hanging fruit. There is nothing original in their performance. What is improv without originality?

One scene features Nielsen, Martin, Larrison, Carey, and Dell’Amico ad-libbing off audience suggestions. “Plunger,” and “condo” were offered. Wenzler pointed to a comedian who started a dialogue, when he pointed to another, they picked up with the previous actor’s last word. When Wenzler fast forwards to chapter 13 of his story the mafia has taken over. So the potty-mouthed cast explodes in more cussing, this time with bad Italian accents.

Many attendees enjoyed the nearly packed opening night performance. If you are into juvenile, lazy, bigoted, sexually-explicit laughter this is the show for you. Stuart Mott provides a series of musical interludes to work with the scenes. A couple of scenes also use music and slow-motion dancing – think Laugh-In – to add to the storyline.

Running Time: One hour and 40 minutes, with a 20-minute intermission.