Director and playwright Leslie Jacobson concludes her final year as a full-time professor at George Washington University with excerpts from plays she has written, directed or adapted. The works draw on gender and societal issues and weave together a timeless response to the human condition. The date range of the excerpts spans approximately thirty years. Staged on tiered risers that carve into the space, actors define each scene with modest shifts that begin in the audience, move in the aisles, or register in brief blackouts that transport to the next story. The multi-generational cast conveys an ageless response in passages that are sung or spoken. 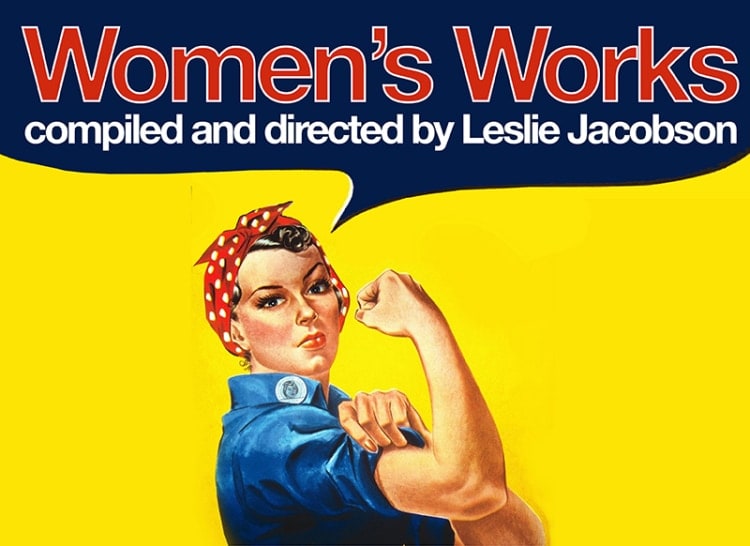 Jacobson, founding artistic director of Horizons Theatre from 1977 to 2007, introduced many new plays through Horizons Theatre and at GWU, where she joined the faculty in 1977. This evening of Women’s Works travels over themes that resonate with women, whether it is valuation by other women, objectification by men, or other boundaries because of religion, perception, or expectation. Topics like the relationship of a woman to food and diet, to age, appearance and body image are nothing new but remain applicable today.

A judgmental internal dialogue drives each character in The Body Project, written by Jacobson and Vanessa Thomas. The scene is carefully crafted for seven women of all sizes. Possibly drawn from recollections of a high school locker room, the actors wrap themselves in colored towels. The towels represent the swimsuits, requisitioned by size, and each character wonders how she is being judged by the others because of breasts and body–too large, too small, the ideal of perfection just out of reach or a long way off. Jacobson’s longtime collaborator Caron Anton shines in a role originated at Horizons Theatre and in a variety of other scenes as Woman, Actress or Acolyte.

Erin Powell, in her first production at GWU, adds dimension and a bright energetic honesty in The Body Project and A….My Name is Alice. Will Low is the resonant Father Humanitas, one of the tribe of males who dominate in a Jesuit liberal arts college in Evil, adapted by Jacobson from the book by Diane Bell. Others scenes adapted from books include Vanishing Point by Jeri Kroll where Diana, played by the superb Angelina Hoidra, is on a mission of self-loathing, and Strangers in Their Own Land by Peter Sichrovsky. Music performed by Roy Barber on piano lifts the dynamism. Live accompaniment and a cohesive ensemble elevate several scenes where Jacobson has also contributed written lyrics, including Migratory Tales and The South Africa Project.

Other notable Washington actors such as Rick Foucheux make bold appearances. The multi-generational cast is also an ensemble of mixed experiences, from the very seasoned professionals like Alan Wade to the actors just starting out like Jolien Louis. It is a tribute to Jacobson and a testament to her artistry that so many actors have returned, or those new to the career have joined to celebrate her work in this endeavor. As colleagues over the years like professional opera singer Leslie Luxemburg, to former students like April Sizemore-Barber (who is now a professional in another field) would certainly agree, Leslie Jacobson has had a big impact on the Washington DC theatre scene, and most assuredly generated a remarkable place for creative interaction and collaboration.