John Webster’s bloody Jacobean revenge tragedy of 1612, filled with infidelity, deceit, greed, and corruption, is brilliantly re-envisioned for our times in Red Bull Theater’s current production of The White Devil, playing a limited engagement at the Lucille Lortel Theatre. The epic narrative, originally based on the actual 1585 murder of Italian noblewoman Vittoria Accoramboni, presents a hellish view of dystopian society and familial dysfunction, with classic lessons about the rampant evils of wealth and power, classism and misogyny, and out-of-control violence that continue to plague civilization to the present day.

With its multi-layered narrative, 20 characters (plus disguises), and unexpected twists and turns, The White Devil isn’t easy. To facilitate viewing, the show’s printed program includes a one-page insert with a synopsis, providing a valuable tool for those who aren’t familiar with the play and a useful refresher for those who are. As directed by Louisa Proske, Webster’s complex plot and sub-plots, multitude of figures, and setting in Italy have been retained, as has his rich and expressive 17th-century language. But the production’s design is transplanted to the post-modern era, to underscore the socio-political import and universality of its themes and, in so doing, to reaffirm that classics are classic for a reason.

Not only is the message fully comprehensible, but Proske’s blocking in the venue’s intimate space is engaging (moving the actors around and off the thrust stage, through the aisles, and in close proximity to the audience) and her pacing is fluid (aided by the clever use of live-feed and pre-recorded video projections by Yana Birÿkova, for scenes that take place in different rooms and distant locations, thereby eliminating the need for cumbersome changes in Kate Noll’s sleek minimal set). The machinations, intrigue, and collusion between the aristocracy and the church, the characters’ adulterous lust and blind ambition, jealousy, anger, and driving need for retribution continuously unfold, culminating in a growing body count and a portent of what’s to come with the next generation.

Through their clarity of direction, design, and delivery, Proske and company effectively capture the play’s unbridled horrors, along with its keen satiric insight and dark sardonic humor, in keeping with Webster’s telling line, spoken by the vengeful Francisco de Medici, Duke of Florence (well played by T. Ryder Smith): “My tragedy must have some idle mirth in it.” The odious conduct and ignoble actions of the characters are, indeed, grimly laughable at times, enhanced by some passages of direct address to the audience that break through the fourth wall, and absurd contemporary references to remote-control devices used to trigger the footlights on stage (lighting by JiYoun Chang, which also includes dramatic white spotlights and devilish red hues that distinguish between reality and ghostly apparitions), automatic weapons, power tools, and gym equipment to effect the countless murders, and ultra-violent movies and virtual-reality video games that have become casual entertainment for both children and adults in our desensitized culture. The more recent tone of the show is reinforced by costumes reminiscent of the disco era (by Beth Goldenberg) and a soundtrack of techno and hard rock music (sound by Chad Raines).

Without exception, Red Bull’s outstanding lead cast masterfully embodies the roles, portraying the emotions, psychology, and motivations of the unsettling figures and their distinctive personalities. Robert Cuccioli as the Cardinal Monticelso confirms his status as an award-winning veteran of Broadway, with a superb command of Webster’s sumptuous script and a controlled performance that bespeaks the hidden duplicity and secret aspirations of the hypocritical ecclesiastic. Lisa Birnbaum captivates as Vittoria Corombona, unjustly tried for the murder of her cuckolded husband Camillo (Derek Smith), condemned to a House for Penitent Whores by the Cardinal for an affair with the officious Duke of Brachiano (Daniel Oreskes) that was encouraged by her rapacious and devious brother Flamineo (Tommy Schrider), then scornful and defiant in her own defense, in a time when women had few options other than to be wives, mistresses, or maidservants (the judgment of Vittoria is one of the play’s most compelling scenes).

The supporting cast, too, brings the requisite passion and biting satire to its roles. Notable portrayals are turned in by Socorro Santiago as the siblings’ honorable mother Cornelia, outraged by their scandalous conduct and driven mad by the murder of their brother Marcello (Amara James Aja); Cherie Corinne Rice in her dual roles as the servant Zanche and the young Giovanni, son of Brachiano and his doomed wife Isabella (Jenny Bacon); and Edward O’Blenis as the dissembling assassin Gasparo.

Red Bull Theater’s stellar production of The White Devil offers a rare opportunity for aficionados of the classics to experience Webster’s infrequently seen work and to recognize in it the harrowing behavior that spans the centuries and defines the worst of humankind. It’s a difficult and disturbing play, but one that is well worth the emotional and intellectual challenges it presents. 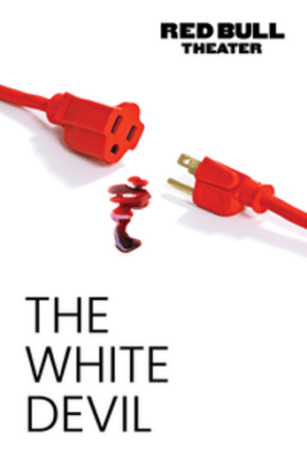