Oscar Hammerstein (1895-1960) – half of the legendary team of Rodgers and Hammerstein (with composer Richard Rodgers), recipient of eight Tony Awards and two Oscars, and writer of the words to an astounding 850 songs over the span of his nearly 40-year career – is universally acknowledged as one of the greatest lyricists from the Golden Age of Broadway. Creator and performer Doreen Taylor revisits the man and his iconic work in Sincerely, Oscar, directed by Dugg McDonough and now playing a limited engagement in the Acorn Theatre at Theatre Row.

In consultation with Hammerstein’s grandson Will, Taylor culled information from the family’s collection of biographical material, including interviews, memoirs, letters, and unpublished lyrics, to give insight into the personal stories, thoughts, and feelings behind the songs. The result is a tribute concert of nearly 30 of Hammerstein’s most famous hits, from such iconic musicals as Oklahoma!, South Pacific, Carousel, The Sound of Music, Show Boat, and more, performed by Taylor and Azudi Onyejekwe, introduced by selected excerpts from the extant documents (with Bob Meenan providing the voice of Oscar), and employing video projections (by Brittany Merenda) and the 3D holographic technology of IceMagic (both augmented by Robert Balan’s apropos sound design), to bring Hammerstein and his words back to life.

Unfortunately, the show plays more like a cabaret act or a theme-park amusement than a musical, and would be better suited to one of those sites than to a theatrical stage. There is no real narrative or dramatic arc, just a chronological presentation of the songs and commentary (which does little to supplement our understanding of the full trajectory of the lyricist’s life and its impact on his oeuvre, with a disproportionate focus on the word “dream”). The projected imagery is more often distracting or redundant than enlightening, with words and letters swirling and moving around, visually repeating what is being said and sung, forming objects and figures from the lyrics (e.g., the bodies of dogs, cats, and cows, and the shapes of stars, are composed of their spellings; a row of fringe that tops the well-known surrey alternates with the word itself dangling vertically), and needlessly underscoring the obvious – that Hammerstein was a wordsmith. The state-of-the-art holographic technology, though interesting at first, unnecessarily prolongs the running time, with the repeated lowering and raising of the central framework, causing empty intervals between the segments (one is filled in with a strange freeze-frame pose by Taylor in the darkness) and resulting in a disjointed show that lacks fluidity throughout its multiple transitions. While the hologram is an interesting concept, the dry repetitive scenes could have been staged more efficiently with live action and a more emotive tone.

The over-amplified lead vocals are problematic, with high-decibel solos that drown out the music, frequent shifts in key, odd enunciations, and unnatural inconsistent attempts at the regional dialects in which the songs from Show Boat and Oklahoma! were written. The musical re-arrangements (by Musical Director Lou Lanza, and, for strings, by Joshua Godoy), too, are inauthentic, with slow tempos, over-extended notes, and jazz stylings (and a hard-rock intro to “Getting to Know You”) that in no way capture the original rhythm, spirit, or context of the beloved show tunes.

Onyejekwe’s expressive characterizations and smooth dance moves are the highlights of the show, but occur far too infrequently. Under McDonough’s direction, Taylor’s moves consist mostly of cautiously spinning, stepping or jumping up and down on the array of platforms (scenic design by Jason Simms), and repeatedly throwing her arms out as she belts out the tunes (though there are a few moments of tender interaction with the engaging Onyejekwe). The performers are spotlighted for their featured numbers, between which the lights go dark during the long pauses for the hologram set-up (lighting design by David Pedemonti), and their costumes (by Dawna Oak ) evoke the era, with his crisp linen suit and her white satin princess dress and rhinestone jewelry (though her casual flat shoes are a glaring mismatch).

Sincerely, Oscar presents Doreen Taylor’s unique interpretation of Oscar Hammerstein and his mid-century work in a concert filled with new and different stylings and post-modern tech. If you’re a purist, or if you prefer your musical theater with a storyline and staging that flow, this is not the show for you. 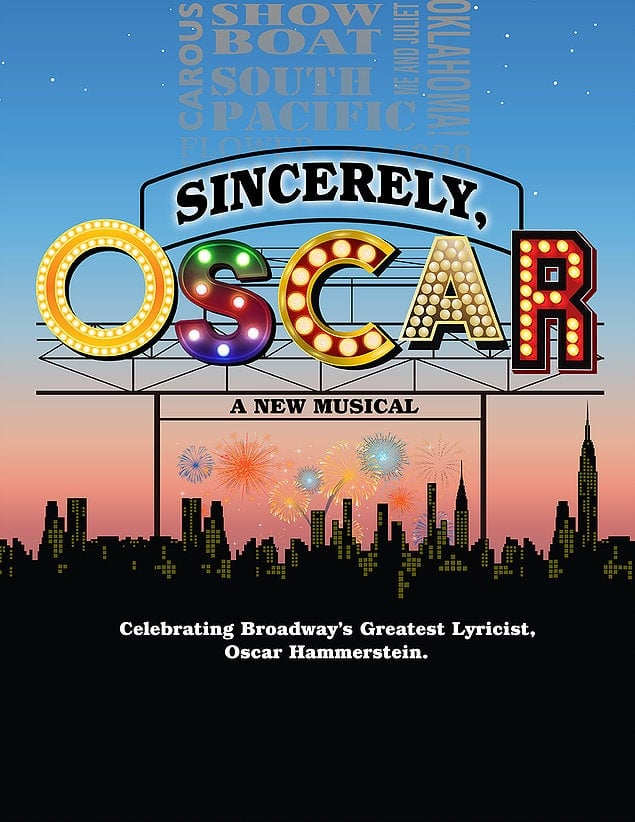