Based on the legendary Leir – ancient Celtic King of the Britons, whose story was recounted in Geoffrey of Monmouth’s 12th-century Historia Regum Britanniae and Raphael Holinshed’s The Chronicles of England, Scotlande, and Irelande of 1587 – William Shakespeare’s epic historic tragedy King Lear, first staged in 1606, has been transplanted to our times in a new Broadway production playing a limited engagement at the Cort Theatre. With its star-studded award-winning team and cast, directed by Sam Gold and led by Glenda Jackson in the eponymous role, the highly anticipated show fully lives up to the status of legendary, epic, and historic. This is one for the ages.

From the moment the play begins, it enthralls. The three-and-a-half-hour running time is never an issue (other than in my wish that it could have lasted even longer), nor is the non-traditional casting of the characters, which fittingly reflects both our present-day demographics and our goal of inclusivity. And if there were ever any doubt that a woman could effectively embody the aged male monarch and his descent into madness, Jackson allays that concern with a ferocious performance that sets a new standard for Lear. She is convincingly arbitrary and capricious in the proud and willful king’s tyrannical demands that his daughters declare their love for him, as he laughs and rewards Goneril and Regan with half of his kingdom for their insincere professions, triggering a narrative of fateful sibling rivalry, familial intrigue, and socio-political machinations taken to murderous extremes. Her emotions then turn on a dime, with Lear cursing and condemning, disinheriting and banishing his youngest and favorite, Cordelia, with the rashness and fire of a dragon and the look of authority in his countenance. She rages, bellows, barks, and growls, rolling her r’s, clenching her fists, tightening her muscles, and bringing all of Shakespeare’s intense emotions to life. Throughout the unfolding of the tragic tale, Jackson (though diminutive in size) continues to command the stage with her towering presence and soaring talent. Her empathetic delivery of Lear’s disorienting madness is unsurpassed, as is her poignant manifestation of his ultimate realization of the mistakes he’s made, the damage he’s done, and the responsibility, regrets, and remorse he feels, when it’s all too late.

Outstanding among the large supporting cast is Ruth Wilson in the dual roles of the forthright and steadfast Cordelia, and as (or in the guise of, as posited by many scholars of the Bard’s work) the King’s Fool, who offers Chaplinesque comic relief, along with sagacious observations and a voice of reason (in a heavy Cockney accent), clownishly joking, chiding, and chortling, singing and prancing atop the banquet table, amusing the appreciative Lear, and insightfully telling him, “Thou shouldst not have been old till thou hadst been wise.” Wilson provides the perfect counterpoint to Jackson (and visually reinforces the production’s timely message in the pair of socks she wears, revealed when she hoists her pantlegs).

Under Gold’s decisive direction, characterizations by the supporting cast are developed slowly but surely. Elizabeth Marvel turns in a compelling portrayal of the adulterous and treasonous Goneril, who displays every thought, deceit, and concern – at first subdued, then increasingly cruel and mocking – on her expressive face. In the role of Regan, Aisling O’Sullivan flatly frowns and looks dejected in the background, until her vicious interaction with the Earl of Gloucester, sinking her claws into his face and shrieking with feral intensity. As Gloucester, Jayne Houdyshell shifts from flippantly saucy talk about his illegitimate son and his dalliance with the woman who bore him, to the pain and suicidal despondency caused by his blinding, to his comprehension of Lear’s dementia and of their parallel plights with their children.

Featured as Gloucester’s embattled sons Edgar (the legitimate heir) and Edmund (the humiliated bastard) are Sean Carvajal and Pedro Pascal. The engaging Pascal is consummately skilled in the Shakespearean style, with a fluid and flawless delivery of the text, as he addresses the audience directly, transitioning from a more sarcastic, winking, and rib-poking definition of his character to one that is fiercely diabolical and menacing, then ultimately repentant – but, as with Lear, sadly too late. Carvajal’s heroic Edgar, intent on saving his father, embraces his disguise as Poor Tom the beggar, and issues one of the production’s most telling allusions to current US politics in the heated debate over immigration policies and the erection of a border wall, making a plea to the assassin Oswald (Matthew Maher) in Spanish (rather than the provincial English dialect originally written by Shakespeare) to permit the poor folks to pass through.

Other noteworthy players include the masterful John Douglas Thompson, who brings the proper sense of honor and loyalty to the Earl of Kent; he renders his eloquence and intelligence clearly in the clever stream of insults that issue from his mouth and in his recognition of both the injustices perpetrated by Lear and the decline of his mental faculties. Dion Johnstone and Russell Howard, too, give powerful performances as the antithetical husbands of Goneril (the Duke of Albany) and Regan (the Duke of Cornwall), with ASL interpreting by Michael Arden as Cornwall’s Aide.

While not all of the actors exhibit the same fluency with Shakespeare’s language and rhythms (e.g., Houdyshell is often overly loud and off cadence, and consequently lacking in breath control; Carvajal’s sometimes sing-song delivery of Edgar’s soliloquies results in a disconnect from his serious emotions), that is a mere trifle in consideration of the overall superlative quality and impact of the performances.

The production’s purposeful focus on the current relevance of the historic situations and personalities are vividly evoked in the updated formal attire and military wear and gear, with a mix of 20th- and 21st-century costumes by Ann Roth, and in Miriam Buether’s contemporary scenic design (including a stately row of eight flags with heraldic devices; the symbolic statues of a bulldog and lion that flank Lear’s throne and traditionally accompany personifications of Britannia; and the golden walls and ceiling that scream luxury, excess, privilege, and entitlement and recall the private apartments of the present POTUS).

Lighting by Jane Cox and sound by Scott Lehrer augment the escalating mood of tension, capturing the tumultuous lightning and thunder of the tempest into which the King and the others are thrust (as do the turbulent swirling patterns on the curtain wall of metal panels, reminiscent of Andy Warhol’s “Oxidation Series”), and composer Philip Glass’s original score for string quartet (beautifully performed by Cenovia Cummins and Martin Agee on violin, Chris Cardona on viola, and Stephanie Cummins on cello) blends the richness of the classical style and a tone of melancholy with the anxiety-inducing droning of his signature post-modern repetitive structures, as the insanity, violence, and body count increase.

The new Broadway production of King Lear is a gripping presentation of a classic, with stellar performances by a formidable star and cast and assertive immediacy in its direction and design. It is must-see theater that speaks to the recurrent abuse of power, presence of hubris, and their dire consequences throughout history.

Running Time: Approximately three hours and 30 minutes, including an intermission. 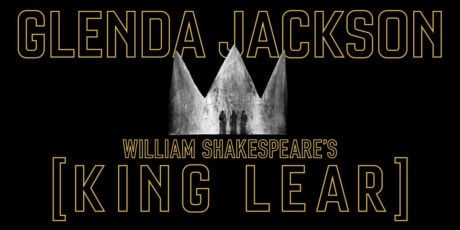