Can you imagine a parallel universe in which the politics of the 2008 US presidential campaign are played out by people with the same names, situations, and inter-relationships as the real-life politicos of the time? Playwright Lucas Hnath could, and considers an arc of behind-the-scenes possibilities in Hillary and Clinton, now making its Broadway debut in a limited engagement at the Golden Theatre.

Billed as “primarily a comedy,” the sharp-witted play, while envisioning the risible machinations, strategizing, and conflicts that might have gone on in a hotel room in New Hampshire during that year’s Democratic primary race, also takes a serious look at both gender politics and the political status quo, in the context of an unpopular former First Lady, an exposed and impeached past POTUS, their deeply troubled marriage, and her failing bid for the presidency, all in urgent need of repair or abandonment. Will she stay the course and/or try to fix the damage, keep flipping the coin until she gets the results she wants, or will she have had enough, accept the inevitable, and believe that #TimesUp on all counts? Every familiar question presented in Hnath’s amusing and considered narrative offers an infinite realm of options, and each decision made within the unlimited range of choices results in an insightful exposé of the personalities and psychology of the characters making them, and a story that might have ended very differently had an alternative path been taken at any step along the way.

Framed in a philosophical direct-address monologue about this universe of infinite possibilities and alternate realities (smartly underscored by Chloe Lamford’s minimalist set and lighting by Hugh Vanstone), the provocative production features a top-notch Tony Award-winning team that should surely garner more accolades here. Laurie Metcalf and John Lithgow star in the titular roles, and, under Joe Mantello’s razor-sharp direction, deliver the biting humor, explosive issues, conflicted emotions, and unwelcome consequences of faulty decision-making in imagined conversations and confrontations that wink at absurdism but ring all-too true. The actors’ perfect comedic timing and astute characterizations (not impersonations or caricatures) are initially funny but ultimately complex – so much so that they will be perceived differently by Clinton supporters (they’re showing their real feelings and humanity, even their flaws and mistakes) and detractors (they haven’t make good decisions about their own personal lives and careers, so how can we expect them to make sound judgments on behalf of us and our country?).

Metcalf’s Hillary is a study in contrasts between the public and private personae (visualized in the distinctive costumes by Rita Ryack); between the exasperation and rage she expresses behind closed doors and the cold, guarded, unfeeling image she projects; between her expressed belief that she could do a better job than the other candidates and the assertive tenacity of her blind ambition; between the pessimistic realization and stubborn denial of her doomed campaign; and in her contradictory self-reflections and equivocal relationship with her estranged philandering husband. Her bravura portrayal is an ongoing revelation, impeccably in tune with Hnath’s multi-dimensional script.

Lithgow, too, is spot-on in his characterization of a man who recognizes his own likability in the public eye and is recognizable in his overarching arrogance. He flagrantly uses his charm, but when he constantly oversteps and begins to lose his appeal, he shows a vulnerable side with Hillary that is either sincere or yet another master manipulation. It’s hard to tell, and that’s precisely the point. Lithgow gets it exactly right.

Zak Orth turns in a hilarious performance as Hillary’s campaign manager Mark, always encouraging to her and passionately opposed to him. He warns her repeatedly to keep Clinton away, then, in one of the highlights of the show, explodes in a riotous confrontation with Bill that drops her to the floor and reminds her husband (who unceremoniously steps over her) that he’ll be remembered throughout history, not for his political policies or accomplishments, but “for fucking around.” And Peter Francis James as Barack is appropriately poised, dignified, friendly, and even-tempered, even when making a not-so-veiled threat that the couple’s shady financial dealings have been uncovered and will be exposed.

Could have, would have, should have, didn’t. In Lucas Hnath’s penetrating Hillary and Clinton, it’s a parallel universe of wheeling and dealing, wasted opportunities, and self-defeating choices that somehow seems virtually identical to ours. 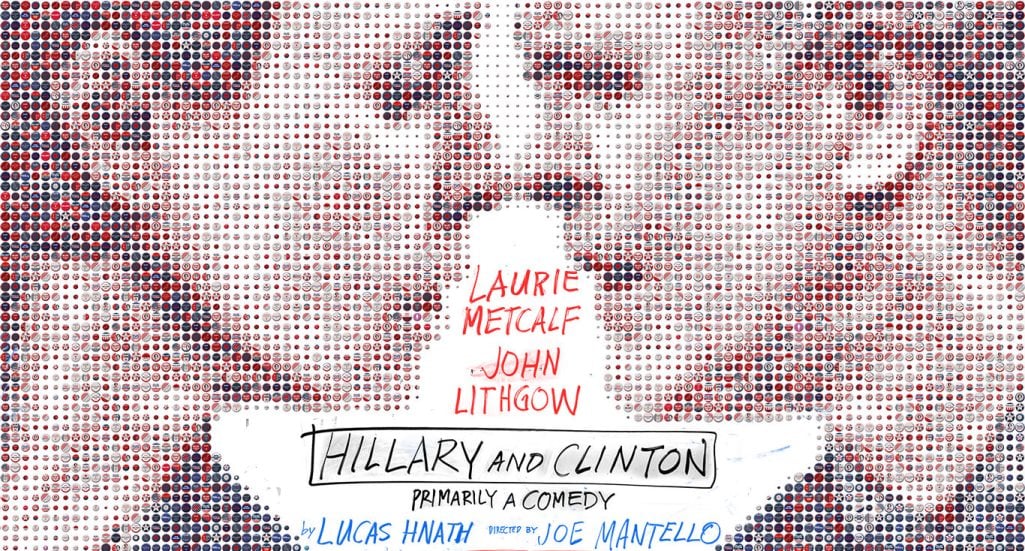