The company will celebrate its 40th birthday by committing to being “Fully Woolly,” which means embracing the challenging, provocative, and galvanizing work this theatre was built on, while also resolving to take things even further. Forty isn’t the time for a midlife crisis – it’s the time for a midlife breakthrough. This is also the inaugural season of programming by Artistic Director María Manuela Goyanes. The alignment of these milestones means Woolly intends to celebrate all year long with parties and special commemorative events to be announced later in the year.

Season 40 kicks off with Fairview by Jackie Sibblies Drury, the 2019 Pulitzer Prize winner for Drama as well as a New York Times Best Theater of 2018 and TIME magazine Top 10 Plays and Musicals of 2018. Offering a richly layered examination of race, representation, and identity, Fairview demands freedom for people of color from the limitations of the white gaze. Fairview will be Woolly’s second production of Drury’s work, after We Are Proud to Present: A Presentation About the Herero of Namibia, Formerly Known as South-West Africa, From the German Sudwestafrika, Between the Years 1884-1915 (2014).

Woolly’s next show, The Movement Theatre Company’s Production of What To Send Up When It Goes Down by Aleshea Harris and directed by Whitney White, continues the conversation about race in America with a community ritual that confronts the reality of anti-blackness. Described by the New York Times as “…fresh and original and in-the-moment life on the American stage” this piece will tour DC, beginning with venues at the forefront of black social and cultural life in the city, before landing at Woolly in the fall of 2019.

Next, The Second City returns to Woolly with a new show inspired by the 2018 runaway all-female hit, She the People. This fresh version will further explore and explode the conversations and characters of its predecessor. She The People: The Resistance Continues!will be directed by Carly Heffernan. “A funny, fiercely political sketch-comedy show.” —Washington Post

Woolly’s 40th birthday will continue with the US premiere of Shipwreck: A History Play about 2017 in association with The Public Theater in New York City. Shipwreck is a new play by Anne Washburn and directed by Saheem Ali. The world premiere enjoyed a successful run at Almeida Theatre in London in early 2019. Ben Brantley says “ [it] promises to be this season’s most exciting American play.” (New York Times) This “…important play…not only examines the Trump phenomenon but also asks why he was elected.” (The Guardian). Shipwreck will be Woolly’s second production of Washburn’s, after Mr. Burns, a post-electric play (2012). 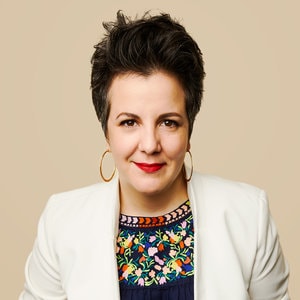 The World Premiere of There’s Always the Hudson, a new work by Paola Lázaro will follow, featuring the playwright in a leading role. The season concludes with Teenage Dick by Mike Lew and directed by Moritz von Stuelpnagel. Teenage Dick originated at Ma-Yi Theatre Company in association with The Public Theater and was commissioned and developed by The Apothetae, a company dedicated to the production of works that explore and illuminate the disabled experience.

María Manuela Goyanes is determined “to fulfill Woolly’s mission to be a galvanizing and innovative force on the artistic landscape of DC, this country, and the world—I believe these artists and these plays are doing exactly that. All of these plays are completely ‘Woolly’—thought-provoking, form-busting, risky, and often, hilarious.”

Since this is María’s inaugural season, she wanted to provide her insight into why these plays have been selected.

Beverly insists the celebration for Grandma’s birthday be perfect. But her husband is useless, her sister is into the wine, and her daughter’s secrets are threatening to derail the day. Meanwhile, a group of foreboding spectators has put the entire family under surveillance. Soon the voyeurs launch an invasion on the festivities, forcing the family to battle for their very identities. Jackie Sibblies Drury (We Are Proud to Present…, 2014) returns to Woolly to boldly confront our perceptions of racism in America by ripping the conventional family drama to shreds.

“Fairview is a game-changing original work about race, challenging us as much as it entertains, and ultimately shattering the lenses with which we see each other. There is no better way to announce my ambitions than to produce a play as exciting and thorny as Fairview. Plus Stevie Walker-Webb (Ain’t No Mo’ at The Public Theater) is an astounding director who I am excited to not only dig into this material with, but also to introduce to DC audiences.” —María Manuela Goyanes

What to Send Up When It Goes Down is a play-pageant-ritual-homegoing celebration in response to the physical and spiritual deaths of Black people as a result of racialized violence. Meant to disrupt the pervasiveness of anti-blackness and acknowledge the resilience of Black people throughout history, this theatrical work uses parody, song, and movement in a series of vignettes to create a space for catharsis, reflection, cleansing, and healing. Boundaries blur as the audience is asked to not only observe the performance, but participate in the ritual as well.

This piece will “move” throughout the city, beginning with venues operating at the intersection of Black social and cultural life in DC, before landing at Woolly in the fall of 2019.

“What to Send Up When It Goes Down is an impactful work specifically created in response to the deaths of black people. It unapologetically pries open a space for people of color in the theater with a community ritual that is by, for, and about black people.” —María Manuela Goyanes

THE SECOND CITY PRESENTS SHE THE PEOPLE: THE RESISTANCE CONTINUES!
Directed by Carly Heffernan
December 2, 2019-January 5, 2020

The Second City returns to Woolly with a freshly written show inspired by the 2018 all-female, all-funny blockbuster, She the People. This brand new version further satirizes the reality of being a woman in this wild world, exploding the myths and misrepresentations surrounding body positivity, bachelorettes, Beyoncé, and the 2020 ballot.

“It’s a no-brainer to bring back last year’s all-female, all-star team. This is a dynamic experiment for Woolly and The Second City, to create innovative material and play with the continuity of beloved characters with this comedy troupe in a way unique to Woolly, DC, and the country.”– María Manuela Goyanes

SHIPWRECK: A HISTORY PLAY ABOUT 2017 in association with The Public Theater
by Anne Washburn
Directed by Saheem Ali
February 10-March 8, 2020

A group of well-meaning liberals gather at a farmhouse in upstate NY for a relaxing weekend. A son adopted from Kenya struggles to feel connected to his new family and country. And the 45th US President sends a dinner invitation that will forever embed itself in the American consciousness. There is plenty of blame to spare as snow piles high, mountains crumble, and the wounds of the 2016 election break open. The mythology of America is re-written in real time as we are forced to grapple with the legend of a frightening New York man made from gold. Anne Washburn (Mr. Burns: a post-electric play, 2012) returns to Woolly with a sinister and sensational new play.

“Shipwreck is a radical play, not just because of Anne’s audacity to imagine James Comey’s meeting with President Trump, but also because of what she makes visible about this current moment in our nation’s history. I’m ecstatic about bringing my two artistic families together by partnering with Oskar Eustis and The Public Theater on this US premiere.” —María Manuela Goyanes

Lola and T met years ago in a support group for sexual abuse survivors. They’ve made a pact… and that deadline is coming at them fast. So tonight, they decide to take matters into their own hands by plotting to exact revenge on anyone who has ever f—ed with them. Spend the night with two fractured souls who are going to let loose their fury in this fearless and f—ed up adventure. Paola Lázaro’s new work takes an up-close look at confronting trauma, and how unexpected human bonds can carry us through.

There’s Always the Hudson is a World Premiere, featuring playwright Paola Lázaro in the role of Lola.

“It is important to me to make space to voices that have been missing, and in the case of this brilliant play, a Latinx female writer with a young Latinx female lead at the center of her own story. Paola is both an actor and a playwright, and her characters leap off the page with tremendous energy, authenticity, and depth.” —María Manuela Goyanes

Welcome to a modern, darkly comic re-telling of Shakespeare’s Richard III set in the most treacherous of places – high school. Bullied because of his cerebral palsy, Richard is willing to crush his enemies in order to become senior class president. But all the scheming, manipulation, and revenge plots force him to ask the age-old question: is it better to be loved or feared? Moving, thought-provoking, and hilarious, Teenage Dick was commissioned and developed by The Apothetae, (Gregg Mozgala, Founder & Artistic Director) a company dedicated to the production of works that explore and illuminate the disabled experience.

Teenage Dick premiered at Ma-Yi Theatre Company in association with The Public Theater.

“Introducing the brilliant actors Gregg Mozgala and Shannon DeVido to the DC artistic landscape was one the many reasons why I wanted Teenage Dick in my inaugural season. This hysterical and riveting reimagining showcases the self-loathing that comes from social rejection, especially for those young and disabled. This show demands that we all, including our current president, reevaluate our rhetoric surrounding the disabled experience.” —María Manuela Goyanes

*All titles and dates subject to change.