Nominations for the 64th annual Drama Desk Awards were announced this afternoon for the 2018-19 season, honoring the outstanding achievements of professional theater artists on Broadway, Off-Broadway, and Off-Off-Broadway. The nominees will be celebrated and the winners named at a live ceremony on Sunday, June 2, beginning at 8 pm, at The Town Hall. The event will be hosted for the fourth consecutive year by Michael Urie, most recently seen on Broadway in the starring role of Harvey Fierstein’s Torch Song at the Helen Hayes Theatre.

Leading the list with twelve nominations is the Broadway revival of Oklahoma!, followed closely by the new musical stage adaptation of Tootsie with eleven, and Be More Chill – which was an internet sensation before it became an Off-Broadway smash hit that soon transferred to Broadway – with eight. The nominees by category (with no distinction made by the Drama Desk between productions on and off Broadway) include:

Outstanding Play – Fairview by Jackie Sibblies Drury; The Ferryman by Jez Butterworth; Lewiston/Clarkston by Samuel D. Hunter; Usual Girls by Ming Peiffer; What the Constitution Means to Me by Heidi Schreck

Outstanding Musical – Be More Chill; The Hello Girls; The Prom; Rags Parkland Sings the Songs of the Future; Tootsie

Outstanding Revival of a Play – Fabulation, or the Re-Education of Undine; Henry VI: Shakespeare’s Trilogy in Two Parts; Our Lady of 121st Street; Summer and Smoke; The Waverly Gallery; Uncle Vanya

Outstanding Revival of a Musical – Carmen Jones; Fiddler on the Roof; Kiss Me, Kate; Merrily We Roll Along; Oklahoma!

Outstanding Actress in a Play – Midori Francis, Usual Girls; Zainab Jah, Boesman and Lena; Elaine May, The Waverly Gallery; Laurie Metcalf, Hillary and Clinton; Heidi Schreck, What the Constitution Means to Me

For a full list of nominees, along with special awards and recognitions, see Broadway News, which presents the awards. Congratulations to all of the artists recognized by the Drama Desk for their outstanding work. 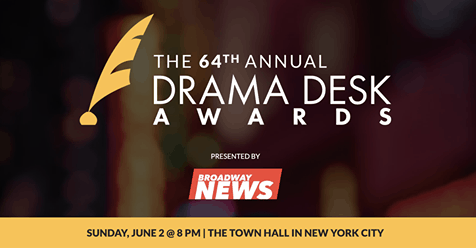