From the moment you enter the theater, it’s as if you’ve been transported to a different realm. Purple, blue, and green lights, ominous fog effects, and eerie music swirl around the darkened space, and bright neon signs inform you that this is the domain of Beetlejuice. A musical adaptation of Tim Burton’s 1988 creepy campy comedy horror film has brought its signature brand of spooky irreverence to Broadway for a run at the Winter Garden Theatre, transforming it into a Netherworld of high-spirited fun, shocks, and laughs, with enough high-voltage energy to raise the dead.

Goth girl Lydia Deetz has become obsessed with death after the passing of her mother, so it’s only natural that she would befriend Adam and Barbara Maitland, killed in an accident and haunting their old house, where she and her father now live. But two rookie ghosts just aren’t enough to scare her Dad back to the home they shared with her Mom, so she summons the eccentric spirit Beetlejuice, who wreaks havoc in the above-ground world of the living, to which he is desperate to return, awakening in her a newfound appreciation for life, love, and family.

The new book by Scott Brown and Anthony King (based on the original story by Michael McDowell and Larry Wilson) and music and lyrics by Eddie Perfect build on the source material, but add more rapid-fire jokes, some slightly different twists, and a score that infuses Broadway with rock, punk, pop, rap, and calypso for an ebullient edgy theatrical re-imagining of the cult-classic movie. Director Alex Timbers sets a lively pace, and a killer cast embraces the quirky characters, offbeat jokes, madcap songs, and zany choreography (by Connor Gallagher) with full-blown vibrancy (there’s just a slight deadening in the second act, as Lydia crosses into the afterlife to find her mother and sings an overly long and mournful ballad in vital need of trimming).

Alex Brightman is sensational in the titular role of the unrestrained over-the-top but lonely specter, turning in an out-of-this-world bravura performance, filling his “show time” with cheeky direct-address comments to the audience, outrageously funny politically-incorrect observations, and no-holds-barred morbid and sexual humor that will have you screaming out loud with laughter, while screaming silently to yourself, “OMG, I can’t believe he said that!” Sophia Anne Caruso’s Lydia is outwardly “strange and weird,” rebellious and macabre, as she gets into that “being dead thing,” sings a Gothic-rock ode to her “Dead Mom,” and bonds with the deceased Maitlands, but also reveals a sensitive side in the depression, loss, and pain she feels, but can’t talk about with her uncommunicative father.

The supporting cast turns in equally entertaining oddball performances, including a possessed group version of the Harry Belafonte hit “Banana Boat Song (Day-O)” and a rousing closing rendition of his “Jump in the Line (Shake, Senora)” that will leave you clapping, shaking, and jumping up and down. Among the funniest featured characterizations is Rob McClure’s adorable “middle-class suburban nerd” Adam Maitland, who is hesitant to take “The Next Step” with his wife Barbara (Kerry Butler), but steps up when necessary to help Lydia conquer Beetlejuice, and Leslie Kritzer is a riot as Lydia’s wacky new-age life coach, who needs to work out the many issues in her own life before she can be of help to anyone else. 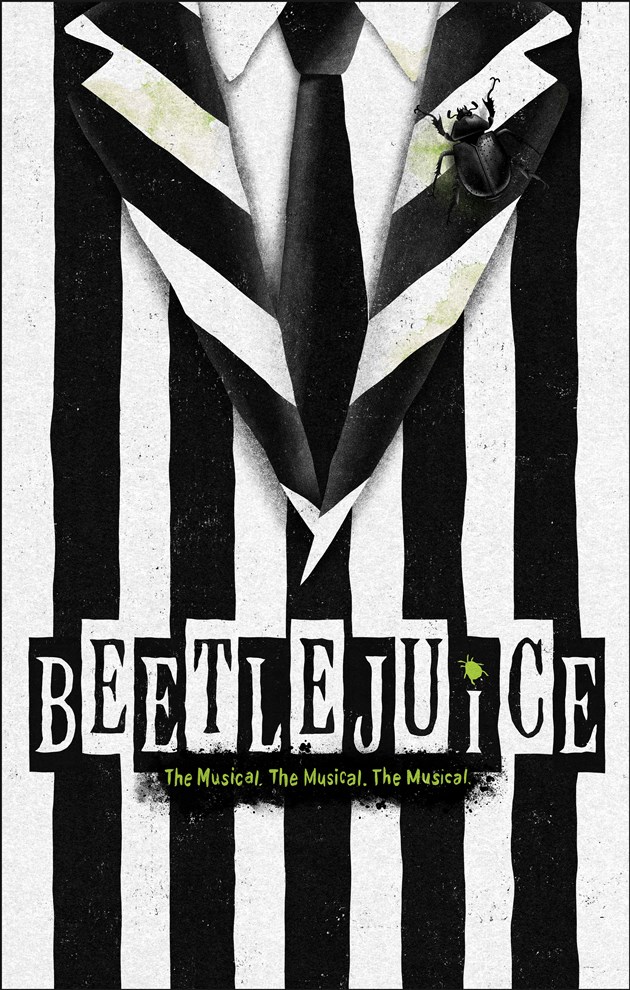