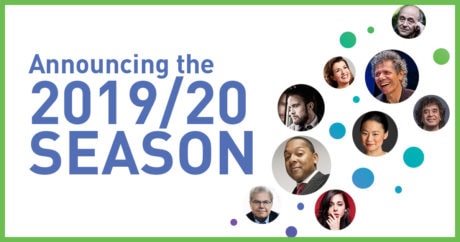 “Artists engage the complexity of our world – whether beautiful or brutal –  in ways that are deeply personal and at the same time resonate profoundly in the shared space of a live performance,” commented Jenny Bilfield, President & CEO of Washington Performing Arts. “From the bold programs of our Hayes Piano Artists, to several all-Beethoven concerts, to works that probe the relationship of humanity to the skies and cosmos, and our strong accent on themes of social justice, I am excited about the scale and scope of the Washington Performing Arts 2019/20 season and the many enduring partnerships that have enriched it.”

Below is a thematic breakdown of a select few of this season’s offerings; for a comprehensive listing of all artists and events, see WPA’s chronological calendar.

Out of This World

Several programs on the 2019/20 season probe deeper into the relationship of humanity to the skies and the cosmos, from natural awe and wonder to the desire to explore and face the unknown head-on. Appropriately, many of these works are epic in scale, incorporating visual or other sensory elements in an attempt to capture a slice of the mysteries of space.

Christopher Tin, the first-ever composer to win a GRAMMY Award for video game music, set a Kickstarter record for the highest-funded classical music project in the platform’s history for his new oratorio, To Shiver the Sky. Washington Performing Arts presents the world premiere of this anticipated new work, which explores mankind’s desire to conquer the sky through texts by Leonardo da Vinci, Amelia Earhart, Jules Verne and others, on its first-ever show at The Anthem, performed by the U.S. Air Force Band and the Choral Arts Society of Washington (May 30).

Continuing a legacy of commissioning new works from leading composers of today, Washington Performing Arts presents the D.C. premiere of Eclipse, a co-commission by Icelandic composer Anna Thorvaldsdottir with video art by Sigurdur Gudjonsson. Performed by the Spektral Quartet, who themselves have commissioned more than 85 new works, Eclipse explores the deep reaches of space through the expansive scope that characterizes Thorvaldsdottir’s music (October 29).

Kronos Quartet, now in year five of its Washington Performing Arts residency, brings its seminal 2002 commission Sun Rings by Terry Riley to D.C. for the very first time. Featuring newly updated visuals and a guest appearance by Choral Arts Society of Washington, the music of Sun Rings acts in some movements as a sonic representation of space probes Voyager and Galileo, while also embodying the perspective of humans as they reach out into the solar system and beyond (March 13). The Kronos imprint carries forth into the program chosen by the young Argus Quartet, which includes Garth Knox’s Satellites (April 14). The work is part of Kronos’ “Fifty for the Future” commissioning and education initiative, of which Washington Performing Arts is a Legacy Partner.

In 2019/20, Washington Performing Arts is pleased to join in the worldwide celebration of Ludwig van Beethoven’s 250th anniversary and of the ongoing, ever-rewarding exploration of his body of work by both iconic and emerging artists of today.

Coming together for their first Washington Performing Arts performances in more than a decade, violinist Midori and pianist Jean-Yves Thibaudet bring a program of three Beethoven sonatas, including the exhilarating “Kreutzer,” to the Music Center at Strathmore (January 25). Later that same week, another star violinist and frequent guest of Washington Performing Arts, Anne-Sophie Mutter, joins her stalwart collaborator Lambert Orkis in their own interpretations of the “Kreutzer” and two more Beethoven sonatas (February 1).

Recently seen by Washington Performing Arts audiences in chamber music settings (in a “super trio” with Leonidas Kavakos and Yo-Yo Ma and in a duo with Itzhak Perlman), pianist Emanuel Ax returns this season with an all-Beethoven program at the Music Center at Strathmore. For his first Washington Performing Arts solo recital in more than 10 years, Ax juxtaposes Beethoven sonatas with other works for piano, including two sets of variations and even the iconic melody “Für Elise” (May 6).

Audiences were enamored with Igor Levit’s D.C. solo recital debut, presented by Washington Performing Arts in 2017 on the Hayes Piano Series. Always a thoughtful programmer, Levit contributes his own commemoration of Beethoven’s 250th birthday with three sonatas from the composer’s early years and the monumental “Hammerklavier,” demonstrating Beethoven’s range and evolution (May 15).

Additional artists on the season have worked Beethoven into the contexts of their larger programs. The Melbourne Symphony’s program includes the composer’s Piano Concerto No. 4, with Garrick Ohlsson as soloist (October 16). Given that Beethoven redefined the genre of the string quartet, it is only fitting that two of this season’s visiting quartets, Spektral and Argus, would put Beethoven quartets on their programs. Finally, cellist Kian Soltani returns to Washington Performing Arts after his solo turn with the West-Eastern Divan Orchestra in 2018 with a program that includes Beethoven’s Cello Sonata No. 5 (January 22).

Nine orchestras perform on Washington Performing Arts’ 2019/20 season, four of which are American orchestras coming to D.C for the third SHIFT: A Festival of American Orchestras, a co-presentation with The Kennedy Center. A common theme throughout this season’s orchestral offerings is a selection of repertoire—and, often, a choice of guest artists—rooted in a strong sense of place and designed to showcase the specific artistic identity of each ensemble.

The first of the ensembles to make its D.C. debut is the Taipei Symphony Orchestra with conductor Jahja Ling; they perform works by Bernstein and Brahms, as well as Taiwanese composer Gordon Shi-Wen Chin’s Double Concerto for Violin, Cello and Orchestra, featuring guest soloists Paul Huang (a WPA regular!) on violin and Felix Fan on cello. Later in the season, Chineke! Orchestra comes to D.C. in a co-presentation with the Kennedy Center. Established in 2015 to provide performance opportunities to young Black and minority ethnic musicians in the U.K. and Europe, Chineke!’s program comprises works by Samuel Coleridge-Taylor, Saint-Saëns, Fauré, and Brahms (April 21). Cellist Sheku Kanneh-Mason, a Chineke! alum who became an overnight sensation after his performance at the wedding of Prince Harry and Meghan Markle, joins as guest soloist.

The Melbourne Symphony comes to D.C. under the direction of Sir Andrew Davis for its Washington Performing Arts debut, performing works by Beethoven, Ravel, Stravinsky, and celebrated Australian composer Peter Sculthorpe, who passed away in 2014. Making returns to D.C. are the Budapest Festival Orchestra, led by Iván Fischer, with works by Mahler and Dvořák (February 21); and the Philadelphia Orchestra, with guest conductor Stéphane Denève leading a program of works by Anna Clyne, Peter Lieberson, and Prokofiev (April 15).

The lineup of the 2020 SHIFT Festival, as announced in 2018, comprises Jacksonville Symphony, Baltimore Symphony Orchestra, Knoxville Symphony, and Orpheus Chamber Orchestra. Each SHIFT orchestra will perform a full-length program at the Kennedy Center Concert Hall and will also take part in numerous residency activities throughout the District that align with the active role it plays in its home community. Programs, locations, dates, and times for residency events will be announced at a later date.

The 2019/20 season opens with globe-trotting “little orchestra” Pink Martini, a group that defies any one genre label but naturally embraces Argentinean tango, Brazilian samba, American swing, and more. Friend of Pink Martini and Australian cabaret sensation Meow Meow performs a set of her own during the concert (October 13).

A trio of jazz A-listers made up of Chick Corea, Christian McBride, and Brian Blade reignites the chemistry of their 2014 3-CD album Trilogy onstage at Strathmore (October 30). A particularly jazzy week in May sees Danilo Perez uniting his dual passions for music and humanitarianism with his “Global Messengers,” a band of musicians from Palestine, Greece, Jordan, and Panama (May 16). Then, the ever-popular Wynton Marsalis and his Jazz at Lincoln Center Orchestra return to pay tribute to the “Jazz Ambassadors”: Duke Ellington, Dizzy Gillespie, Dave Brubeck, and Benny Goodman, all artists who toured internationally and spread the gospel of jazz worldwide (May 21).

Jazz fans won’t want to miss a series of shows at Sixth & I, spotlighting some of today’s most talented young artists of the genre. First, Chilean-born tenor saxophonist Melissa Aldana returns for a solo set after wowing audiences in 2019 with the Monterey Jazz Festival On Tour (February 15). 18-year-old piano and Hammond B-3 organ wunderkind Matthew Whitaker makes his series debut, following in the footsteps of B-3 godfather Dr. Lonnie Smith but decidedly forging his own musical path. Whitaker’s show includes a guest appearance from the Washington Performing Arts Children of the Gospel Choir (February 29). Finally, vocalist Veronica Swift, last seen as a featured guest with the U.S. Air Force Band in Washington Performing Arts’ 2019 tribute to Glenn Miller, comes back for a show of her own (March 21).

And Justice for All

For their Washington Performing Arts debuts, Lil Buck and Jon Boogz (foremost interpreters of Memphis jookin’ and popping, respectively) bring their show Love Heals All Wounds to GW Lisner Auditorium. A multi-disciplinary experience made up of a series of dance scenes interspersed with poetry readings, Love Heals All Wounds confronts some of today’s most pressing social issues, from police brutality to mass incarceration to gender and racial equality (May 1).

Additional events on the season that deal in varying ways with social justice issues include the aforementioned Chineke! Orchestra, founded to address issues of racial parity in classical music; the West-Eastern Divan Ensemble, carrying out the larger West-Eastern Divan Orchestra’s mission of promoting peace and unity among musicians in Israel, Palestine, and other Middle Eastern nations (February 27); and the annual Living the Dream, Singing the Dream choral celebration of Dr. Martin Luther King, Jr. with the Washington Performing Arts Men, Women & Children of the Gospel Choirs and the Choral Arts Society of Washington (January 26).

Subscriptions go on sale to the general public Tuesday, May 14, at 9:30 a.m. at WashingtonPerformingArts.org, by phone at (202) 785-9727, and in person at the Washington Performing Arts Ticket Office, located at 1400 K Street NW, Suite 500. A series of advance sales periods for Washington Performing Arts Friends (annual donors), organized by gift level, begins Thursday, May 2, at 9:30 a.m. A complete listing of 2019/20 season artists and events is available online at WashingtonPerformingArts.org.