Avant Bard Theatre announces the full cast and creative team for its season finale, A Misanthrope, a world premiere adaptation of Molière’s The Misanthrope by Manhattan-based playwright Matt Minnicino, directed by Megan Behm in her Avant Bard debut. 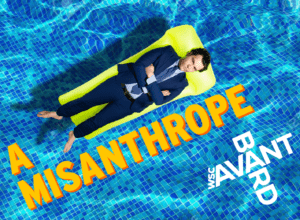 A Misanthrope is a brisk, biting comedy about a cynic named Alceste who thinks insincerity is a sin. But the joke’s on him when he falls for Celimine, an ingenue who’s more than his match. Matt Minnicino’s A Misanthrope distills Molière’s best-known farce into quippy rhyming couplets. And it pokes fun at social flattery with a hot take on the absurdity of modern hot airs. Hypocrisy has never been more hilarious.

“Moliere’s comic classic was about mocking hypocrisy of the French aristocracy, but we’re going to look at these themes through a more modern lens,” said Director Megan Behm. “We’ve set A Misanthrope in the present at a fabulous vacation villa in the South of France during a booze-fueled pool party with the wealthy and wanna-be famous.

“The characters are international jet-setter types, filthy rich and in the prime of their lives,” Behm continued. “They are all mostly oblivious to the consequences of their actions. With money to burn, why be serious about anything?

“To me, this play is about the inauthentic and superficial selves people project into the world, and then what happens when they are trapped in these roles. Alceste is not just some asshole who mocks everyone because he’s mean. He’s an outcast because he refuses to play this game.”

Matt Minnicino’s work has been developed around the country. Besides Molière, he has adapted Chekhov (three times), Strindberg, Ibsen, Gorky, Genet, Shakespeare, Aeschylus, Euripides, Sophocles, Homer, The Book of Genesis, poems by Rilke, art by Magritte, and more. He is an alumnus of Pipeline Theatre’s PlayLab, the Great Plains Theatre Conference, and SPACE on Ryder Farm and is the winner of the Arts & Letters Prize.

For full cast and creative team bios, see “Who’s Who in A Misanthrope.“

“Matt Minnicino, whose work has been an audience favorite in Avant Bard’s Scripts in Play Festival, is one of the smartest and funniest playwrights I know,” said Executive and Artistic Director Tom Prewitt. “His fresh takes on classics are right up Avant Bard’s alley. And we’re all intrigued by Megan Behm’s swanky concept for Matt’s laugh-out-loud script.”

Advisory:
A Misanthrope contains some themes risqué,
Some subjects sordid, words one shouldn’t say.
Much as we’d love to mitigate your fears;
Such syllables wouldn’t suit the youngest ears.
—The Saucy Author