Love Letters, A. R. Gurney’s two-character play chronicling the tumultuous lifelong friendship between a couple who never marry will be performed May 31 and June 2 as a special benefit for Annapolis’ Compass Rose Theater. 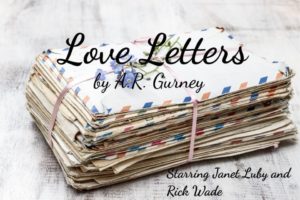 Both Ms. Luby and Mr. Wade are familiar figures to Annapolis theatergoers over the years.

Wade has directed and performed in the Annapolis, Washington and Baltimore areas for more than 40 years for professional, community and college theaters, including Bay Theatre, Compass Rose, the Colonial Players and the Annapolis Summer Garden Theatres. He authored the adaptation and lyrics for the musical version of A Christmas Carol, with music by Dick Gessner that has been produced in Annapolis for more than 30 years.

“We have wanted to make this lovely play a part of the Compass Rose season for quite some time, “ Ms. Browne said. “In an age of email and social media, it reminds us of the deep emotions and humor that putting pen to paper can bring out of us.”