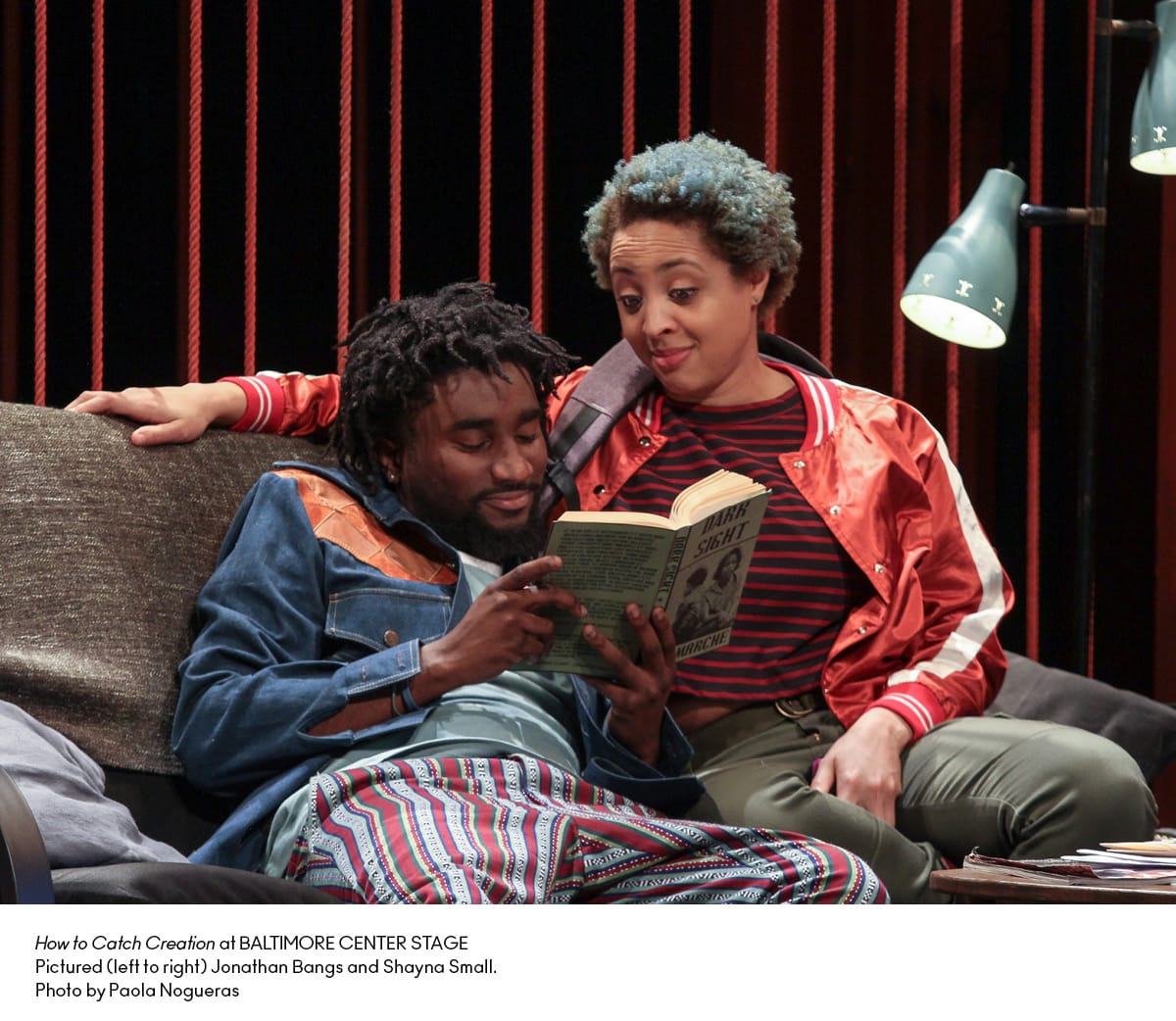 How to Catch Creation is refreshing in that, in the words of Production Dramaturg Sabine Decatur, it “centers Black people without centering Black pain…Anderson commits the revolutionary act of representing Black people as people: people who have messy love lives, drink too much wine, and make art.”

With a plot that spans from 1966 to 2014, How to Catch Creation looks at the life of fictional Black feminist author G.K. Marche, writer of 35 novels; Marche’s lover Natalie; painter turned writer Stokes and his girlfriend Riley, who can analyze an “algorithm with my ass”; Griffin B. Charles, 47, fresh out of prison after 25 years, a wanna-be surrogate father; and Tami, another painter–among other things–who helped get Griffin out of prison. Betrayal, maternity, and trust issues, affecting both couples, came to the fore in the second act.

Garrett got the most out of Anderson’s story, which often had Marche and Natalie and Stokes and Riley on either side of the stage, talking simultaneously about similar issues in different time periods. Marche and Natalie’s scenes were mostly in 1966 in the Tenderloin District of “a place that resembles San Francisco.” Stokes and Riley’s, and Griffin and Tami’s scenes took place in 2014, in the same setting.

Fans of stagecraft will love the intricate workings of the Golden Gate Bridge set piece, which appeared to be over 20 feet high, complete with red LED lights attached. The bridge sat on an enormous, rotating circle, built into the stage floor; the mouth of the bridge served as a door, and the cables on either side of that door served as walls of apartments.

Outside and concentric to the Golden Gate Bridge set piece’s circle, there was an approximately three-foot-wide ring/track that rotated counterclockwise, that the actors walked on to get from place to place. The ring/track would magically transport additional set pieces on and off stage by appearing and disappearing behind a circular, black curtain. An overhead scrim represented a cloudy sky. Scenic Designer Jason Sherwood did astounding work here.

Sound Designer and Composer Curtis Craig contributed to a memorable sans dialogue scene at the end of the first act that involved funky beats, Xavier Pierce’s blue lighting, and the rotation of Sherwood’s set as the actors played out various racy scenes. It was a sensory blowing sequence. 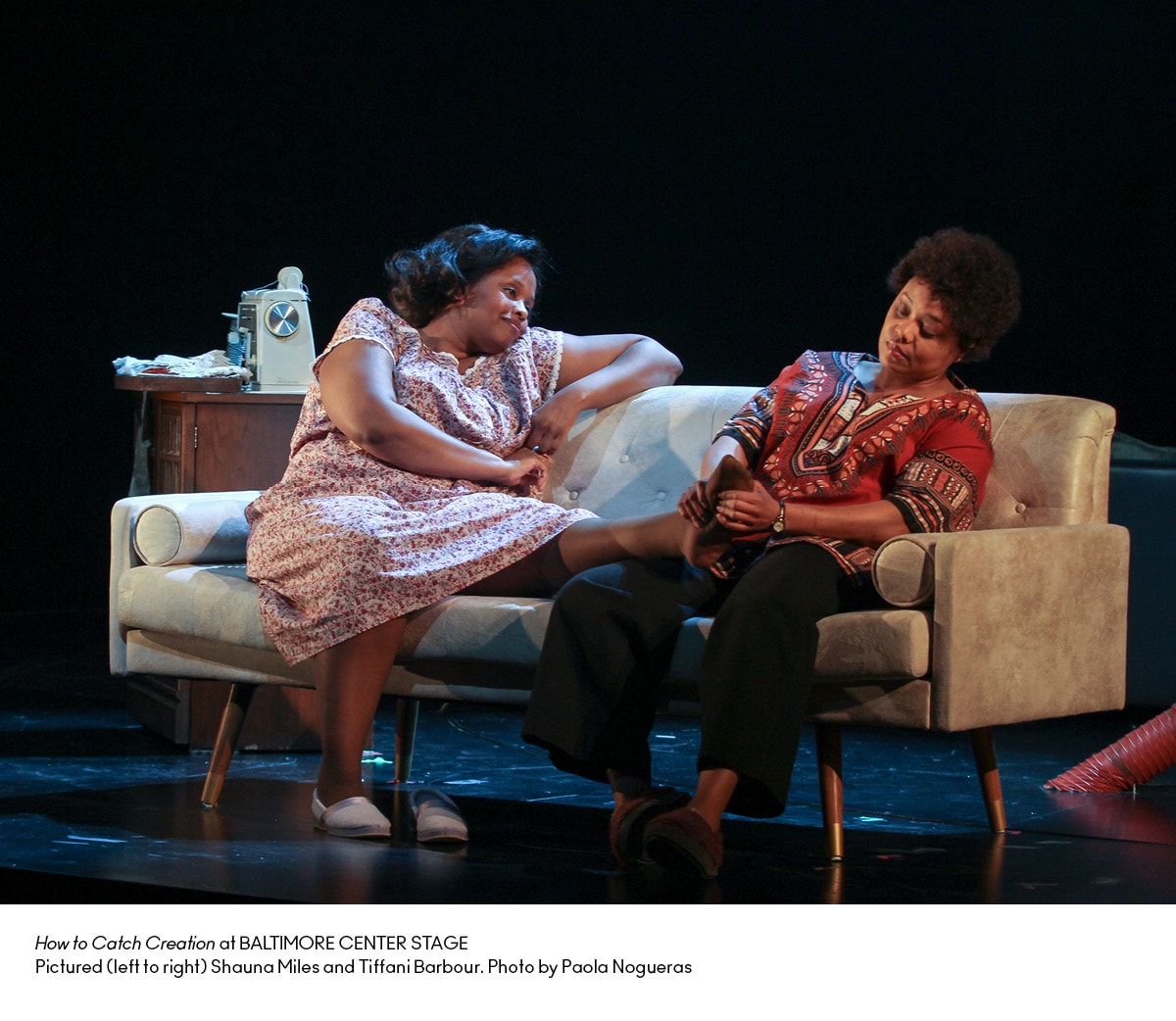 Lindsay Smiling, sporting Frederick Douglass-style hair, brought a range of emotions to ex-con Griffin, a character with mother issues. Shayna Small, in her Center Stage debut, made Riley a spark plug of energy, especially in her scenes with illicit love interest Tami, played with panache by Stephanie Weeks.

Jonathan Bangs, who played Stokes, a man who dropped “his [paint] brushes in the face of rejection,” was dynamic and engaged in his scenes with Smiling. The two men had a good onstage rapport.

Broadway veteran Tiffani Barbour made both the young and the older Marche believable. Shauna Miles portrayed the angst of the long-suffering Natalie in a way that elicited sympathy for her character.

This show is an amazing mixture of magical stagecraft and superior acting. Be sure to catch it as soon as you can.