Undampened by the rain outside, the DC stop on the Ben Platt’s Sing to Me Instead tour brought three serious talents to the Anthem stage with thunderous applause. Passionate, creative, and delightfully awkward, the voices of Wrabel, Ben Abraham, and Ben Platt built on top of one another to create an incredible night of music and authentic connection.

Kicking off the evening was Wrabel. A singer-songwriter from LA, Wrabel gave off a one-man and his piano, Ben Folds-vibe with urgently earnest songs that paired well with his freely dancing legs and pointed voice. The opening number “11 Blocks” had a percussive melody and used a rhythmic sense of space and silence throughout. Similarly, “Flickers” played with lush chords and cliffhanger endings/closes and the stripped-down version of “90 Days,” originally recorded with P!NK, was sung with ardent abandon. The most touching for me though was “The Village,” with a chorus that honors the transgender fans who had been its inspiration.

Next up was the smoky voice of Ben Abraham. With a dry, cheeky wit emblematic of his Australian home, Abraham’s set explored themes of love, belonging, and partnership. From “If I Didn’t Love You” to “Don’t Be Afraid to Grow Up” to “Satellite,” the tripping embellishments of his vocal style were liquid and flowed down the goosebumps on my arms. Playing both guitar and piano, Abraham’s musicianship was captivating. For me, the highlight moment was the silky decrescendo at the end of “Caught in the Middle,” that ended his set with beautifully balanced quiet.

That quiet abruptly ended though with the entrance of the evening’s headliner: Ben Platt. Best known for his portrayal as Benji in the Pitch Perfect movies and as the title character in the Tony, Emmy, & Grammy Award-winning Dear Evan Hansen, Platt’s tight, controlled vibrato is recognizable in an instant. And it was with that starting note that the energy in the room shifted from a laid-back music salon to an electric living room jam session that was both intimate and larger than even the Anthem’s walls could hold.

Pulling almost exclusively from his newly released album, Sing to Me Instead, the evening was about Platt stepping out from behind the characters for whom he is best known and introducing his true self to both himself and to audiences. The opening two songs of “Bad Habit” and “Temporary Love” – Platt co-wrote both songs as well as the others on the album – were joyous announcements of discovery that allowed Platt (and the rest of us) to unapologetically revel in his goofy personality.

Freed from the restriction of lines, blocking, and motivations, Platt looked openly and animatedly for ways that he could share himself, his personality, his mistakes, and his moves with the audience. With a stage presence that mirrored his signature overflowing riffs, seeing and hearing his music performed live added an incredible sense of depth to the songs. In “Honest Man,” “Better,” and “Hurt Me Once,” Platt used his soaring and unrestrainable range to share the lessons he’s learned in loving others, and in “New” and “Share Your Address“ Platt danced for the love of himself. 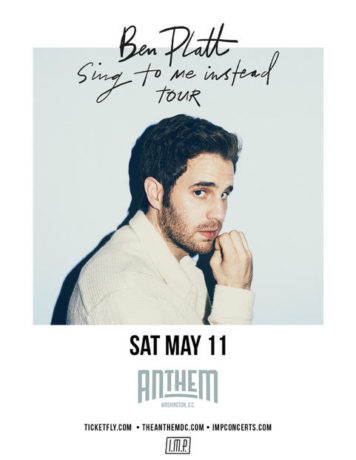 Through these thoughtfully nuanced depictions of every season of a relationship, Platt showcased his ability to write and connect with life milestones well beyond his 25 years. And not just for romantic relationships; the most touching moments were in singing to his parents (‘Run Away”) and grandmother (“In Case You Don’t Live Forever”).

Bringing other musicians along with him (if even in spirit) was another highlight of the evening. Platt nodded to Brandi Carlile and Elton John with renditions of their “The Joke” and “Take Me to the Pilot” (respectively) that celebrated and amplified their melodies using Platt’s own cascading style. Stevie Wonder’s “Overjoyed” was another such cover that not only sunk into a tremendous groove but highlighted the incredible visual staging of the Sing to Me Instead tour. With fading and pulsing purple spots shining up from the back of the stage, it gave the effect of purple rain laying back into the music.

Finishing the evening with “Grow As We Go,” “Older,” and “Run Away,” Platt’s artistry and amazing control lodged itself in my heart. Setting out with the goal of breaking from behind his roles and into himself, the Sing to Me Instead tour required Platt to pull from his years of experience in channeling the vulnerabilities of others. When the microscope turned on himself, he didn’t shy away from pressing into the disappointments, triumphs, lost opportunities, and celebrations of his life. For an audience member, seeing this artist truly connect with that purpose both in song and in presence was, in a phrase, magic to witness.

Running Time: Two hours and 30 minutes with a 15-minute intermission.