The circusy-party vibe begins before showtime. The place is festooned with streamers,  furnished with comfy sofas, bedecked in colored light, and stocked with bags of popcorn to share. A friendly Fool in a cabalistic cape greets the arriving “seekers” and “witnesses.” To those with a seeker ticket, she will give a Tarot card, and when it is drawn during the show, that person will be summoned to be in a one-to-one vignette (a “revelation”) devised by one of seven cast members (“mediums”). Against a wall are shelves full of all the odd objects that prior Tarot-goers have offered as their “sacrifice” to enter. It’s a peculiarly cool and strangely welcoming scene.

The Tarot Reading—now in its fifth fanbase-expanding iteration—is a wholly original live-theater format. This makes it difficult to describe to someone who has not yet partaken. Everything happens before your eyes in real time, never to be seen again; and as in improv the ephemeral spontaneity and surprise elicit hoots of hilarity along with moments that make you go hmmm. But unlike in improv, where quick wit is all, each Tarot Reading revelation is allowed time for something meaningful (and often moving) to occur. To that end, each on-the-spot participatory performance has been prepped with presets involving a mixed bag of props, storytelling, games, songs, dance, costumes, characters, light effects, sound cues, and more. But the ingredient common to each is that the mediums have gone into themselves as human beings to touch on some truth to be shared theatrically with others.

“There is no lying here,” explains The Fool (Joan Cummings), introducing the show. This space is “free of lies.” She will go on to emcee the proceedings and fill in between playlets with perky patter. But as the revelations unfold—and as truths pop up—The Fool’s initial advice comes to seem ever wiser: “Witness this as real.”

The eclectic truths theatricalized typically have autobiographical sources. Particulars about the seven mediums themselves are revealed as much as more inclusive eurekas. The 21 vignettes I saw touched on themes of success and triumph, our place in the solar system, the connection between food and memory, how it feels to say “I love you,” the meaning of personal strength, how genetic ancestry relates to self-definition, the fluidity of personal identity, pre-death directives, spiritual cleansing…  Each one is a whole new world. 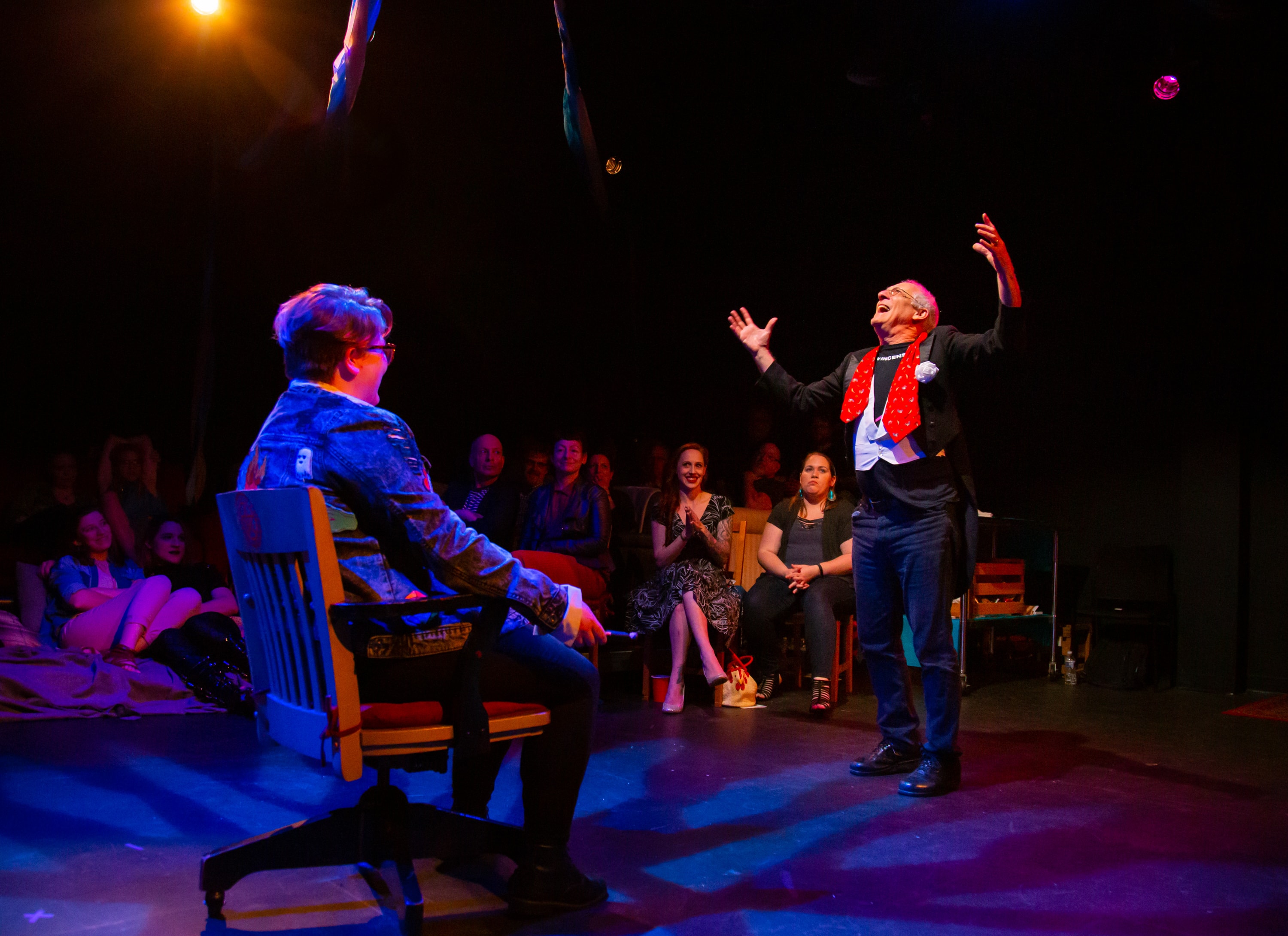 Each of the seven mediums performs three revelations, each loosely based on a Tarot card, which results in a showcase of an amazing range of talents and topics. Actor and vaudevillian Gwen Grastorf, for instance, beguiled with cups-and-balls magic tricks as she told of family deception around her dad’s cancer. Actor and singer Toni Rae Salmi belted out a devil-may-care torch song to a soundtrack that rocked the house. Poet and playwright David S Kessler did a soft-shoe homage to Fred Astaire while telling of childhood ups-and-downs. Actor, poet, and musician Shaquille Steward delivered an apocalyptic rap. There’s much, much more, and it’s all done in front of everyone for an audience of one.

The stagecraft is so subtly executed it feels less like a theatrical production and more like a party with nifty artistic parlor games going on. Behind the scenes are 21 different sets of sound and light cues on call. Also at the ready are personnel for personal care should anyone use the safety signal that The Fool demonstrates beforehand.

To Co-Creators Quill Nebeker and Alan Katz, it was essential that each audience member—whether witness or seeker—feels safe to be open to the sometimes unexpected emotions that may arise during The Tarot Reading. Crucially, the performers are continually conscientious about informed consent, and there’s free choice to opt out of anything at any moment.

Truth to tell, The Tarot Reading is kind of carny, kind of corny, kind of kooky, kind of culty. But it’s a lot more for real than all the arcana might suggest.

Running time:  About three hours, including two intermissions. (This is the running time for the 21-card Classic Tarot. There is also a version called Nine Card Draw that runs about 90 minutes.)

The Tarot Reading (V) plays through 26, 2019, produced by The Arcanists at the Anacostia Arts Center – 1231 Good Hope Road, S.E., in Washington, DC. Tickets are available online (where you can find explanations of the types of tickets—Nine Card Draw or Classic Tarot, Witness or Seeker).

Magic Time!: 10 Questions for the Brains Behind ‘The Tarot Reading’