Tony Award-winning director and Nuyorican choreographer Luis Salgado brings his New York creds to Columbia Heights with the power of a New York City subway platform Flash Dance as over 20 dancers and performers fill every corner of GALA’s stage with energy and excitement.

“It’s not about living forever, but about hard work”, said Salgado in remarks following the successful opening of a month-long run as Salgado returns to GALA with his Pan-Latino creative team after winning nine Helen Hayes Awards for last year’s production of In The Heights.

An important member of the creative team is Nicaraguan Walter “Bobby” McCoy the music director in the dome of GALA’s theater who leads a nine-piece band from the rafters.

To add to the story’s authenticity, the cast includes Susan Oliveras, an actual FAME school graduate of the Fiorello H. LaGuardia High School of Music and Art and Performing Arts, as the stern English teacher Esther Sherman who insists that each student perform in the classroom as well as on the stage.

Oliveras underscores one of FAME’s most compelling storylines concerning the street-smart dancer Tyrone Jackson’s struggle with reading that almost flunks him out of school until Ms. Sherman diagnoses his dyslexia.

Romainson Romain’s break dancing and choreography skills as the leader of the dance pack is the highlight of the show as he is cast as Amaya Perea’s love interest in her role as the mistakenly rich ballerina Iris Kelly.

Featured in the cast are Paula Calvo (Carmen Diaz) and Carlos Salazar (Nick Piazza) from Columbia, who recently completed a tour of Disney’s Beauty and the Beast; and New York actors Rafael Beato (Joe Vargas), Juan Luis Espinal (Schlomo) and Amaya Perea (Iris) all of whom appeared in GALA’s In The Heights.

The bilingual Latinix flavor flows over into the performance with the title song taking on a Flamenco flavor mid-way through the finale, but now staged as a moving high school hallway with lockers thanks to the creative touch of scenic designer Clifton Chadwick.

FAME got is name from a David Bowie hit song from the late 1970s, and continued its popularity onto the TV screen with Debbie Allen and Irene Cara after the 1980 movie made its debut. But even with Debbie Allen’s presence at Dance Place across town at the Lincoln Theater, the place to be on Saturday was GALA Hispanic Theatre, as FAME The Musical lit up Columbia Heights! 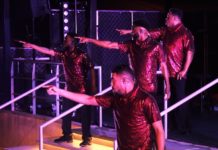