Flashing a wide smile and a peace sign, outfitted in power suit, sensible pumps, and her trademark glasses and bouffant, Shirley Chisholm enters the Anacostia Playhouse blackbox waving to the applauding audience. It’s not actually Shirley Chishom—the first African American woman elected to Congress (in 1968) and the first woman and the African American to seek the nomination for president of the United States (in 1972). But as you begin to appreciate Dominique C. Brown’s meticulous, first-rate impersonation of the badass congresswoman from Bed-Stuy, you might well find yourself imagining the legend is back and running again.

Or maybe this is just wishful thinking, the result of watching Campaign ’72—Writer/Director Odell B. Ruffin’s fascinating tribute to Shirley Chisholm—just days after the first Democratic Party presidential debates. Because it was Chisholm who paved the way for every woman who has sought that high office in the U.S. since. And judging from her oratory that Ruffin has deftly excerpted in his inspiring bio-play, Shirley Chisholm’s politics and persona could have owned that Miami debate stage. 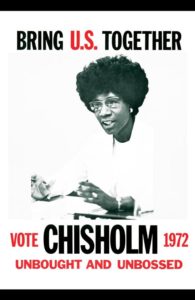 Unbought and Unbossed was the title of Chisholm’s autobiography and also the slogan on her 1972  campaign poster, a reproduction of which hangs from a speaker’s podium stage right. Ruffin’s brisk script is in 13 scenes with music of the period in between. And Brown’s performance has a winning immediacy that engages and entertains throughout.

Brown is particularly adept at capturing Chisholm’s tenacity as well as her distinctive speech pattern—a slight lisp with traces of a British/West Indies accent—all of which makes her voice in the political arena all the more unmistakable.

In vivid swift strokes, Campaign ’72 takes us through highlights of Chisholm’s life and captures not only Chisholm’s legislative career but also the political tensions of her time: the Civil Rights Movement, the Women’s Movement, the abortion issue, the busing controversy, the Viet Nam War, the Equal Rights Amendment (which Chisholm introduced into Congress). The scenes are structured simply and directly and have a commendable edutainment quality. This is a play from which not only adults but schoolchildren can learn what it means, and what it costs, for a black woman to live a public life that matters.

But it’s the extensive passages during which the play lets us hear some of Chisholm’s speeches that are ultimately most stirring. Here, for instance, is Chisholm framing her critique of the Nixon administration in words that could be on point today:

CHISHOLM: Fellow Americans, we have looked in vain to the Nixon administration for the courage, the spirit, the character and the words to lift us…. To bring out the best in us, to rekindle in each of us our faith in the American dream. Yet all we have received in return is just another smooth exercise in political manipulation, deceit and deception, callousness and indifference to our individual problems and a disgusting playing of divisive politics. Pitting the young against the old, labor against management, North against South, black against white….

The president has broken his promises to us, and has therefore lost his claim to our trust and confidence in him. I cannot believe that this administration would ever have been elected four years ago, if we had known then what we know today. But we are entering a new era, in which we must, as Americans, demand stature and size in our leadership — leadership which is fresh, leadership, which is open, and leadership, which is receptive to the problems of all Americans.

Shirley Chisholm was impassioned, she was principled, she wrote the book on what it means to persist. And she demonstrated a humanity above and beyond political ideology. This insight hit home in a scene that takes place after the notorious racist Governor George Wallace had been shot. Chisholm visited him in the hospital and prayed for him—”because it was the right thing to do.”

“I want to be remembered as a woman who dared to be a catalyst of change,” Chisholm once said of herself. Campaign ’72 not only memorializes her legacy in compelling storytelling. It makes us realize that Shirley Chisholm is still one heck of a hard act to follow.