Wanda Savage was a trailblazing Chickasaw woman, American sharp-shooter, silent-film actress, and divorced single mother, whose life provides a telling illustration of the racism, sexism, and abuse that she (and so many others) faced in the 1920s. Her dramatic story is the subject of Savage the Musical, presented for two performances only this month by the New York Musical Festival (NYMF) and Llhpokona Productions, in a concert version at the Laurie Beechman Theatre.

I had the opportunity to discuss the show, the woman, and their present-day relevance with Savage’s real-life great granddaughter Nicolette Blount, co-writer of the book, music, and lyrics (with Lindel Hart and John Waynelovich), and with director Rachel Klein, a recurrent favorite at NYMF.

What’s your earliest memory of hearing your great-grandmother’s story, and what was your emotional response at the time?

Nicolette: I can’t remember a specific moment. I grew up hearing about my great grandma Wanda from my grandfather, her son Paul, my mom, and other members of the family. My first birthday was at her ranch in Wyoming, which is now run by her youngest son and his family. I don’t know of many performers on my mom’s side of the family, other than myself, so I always felt a connection to Wanda. I have always been a bit of a rebel and I am sure I got my strength and rebellious spirit from her. As a mom and a performer, I always felt that there was another side to her that was deeper. A woman does not just leave her children to have a career without it being heart-wrenching. Let’s be honest, as a Naive American AND a woman in a time when women were just starting to have a voice, what choices did she have? She married young, had two children, her husband died very shortly of cancer and she was a widow. She then married the next door neighbor, who ended up being abusive. Her choices were: to stay with a husband who was abusive to her and her children; or to take this amazing opportunity given to her to perform and possibly to be able to support her children – even though she may have to leave them; or to leave the husband and live in poverty with her children.

At what point did you decide to create a musical inspired by her?

Nicolette: I’ll be honest here – it’s my nature to be open and honest. My parents died of cancer very young, a few years apart from each other. The last song I wrote, sang, and recorded was for my father’s funeral, “Eagles Wings.” The song was played at his funeral and then at my mother’s. I didn’t write another song for seven years! In fact, I just recently released the song, nine years later, after having friends continually asking me to, because they loved it. Fast forward to an event I was part of at Ja’Duke Center for the Performing Arts, where my children and I do a lot of musical theater and dance. It was a 20-year celebration. They had us sing a song that I had never heard before, “We’re Friends,” written by my co-composer/arranger John Waynelovich and his father Nick Waynelovich, President/Co-Owner of Ja’Duke, for a musical they had written called Cave of Fish. As a songwriter and writer I thought, “I should write a musical. What would I write it about?” Then instantly I thought of Wanda. That started me on this path and collaborating with John and Lindel. The first song I wrote was “Never Too Far Away,” which I realized, when hearing it back, was like my parents were speaking to me from the grave. That writing took me out of a seven-year funk of anxiety and depression. Who knows, maybe my Great Grandma had her hand in that; we always say she is guiding this show somehow – but that’s a whole other subject. Let’s just say odd things have happened making her very real to us.

How did you become involved in the NYMF concert?

Rachel: I met Nicolette, Lindel (co-bookwriter), and John (co-composer and additional lyrics) through a mutual friend, producer David Treatman. David had been following the project and immediately thought of me, and made the introduction. After that, I kept in contact with the team, and when NYMF came up, it seemed like the perfect time for us to begin a collaboration together. I love having Nicolette in the rehearsal room with us; she has a wealth of knowledge about the life of her great grandma, and this concert process has further helped me to envision the future development of the piece.

What do you find most compelling about it?

Rachel: I have always had a fascination with historical icons, and Wanda’s story is certainly that of iconic status. The musical is based on real events from her life, which was a rich tapestry of intrigue, scandal, world travel, show-biz razzle dazzle, failed romances, impossible choices, and standing proud in the face of adversity. After growing up on the reservation, she toured the Vaudeville circuit, was a silent-era Hollywood starlette and stuntwoman, and dealt with both racial and gender discrimination every day of her life. She was a total warrior who remained strong through it all, and I am excited to contribute to honoring her legacy.

Why is Wanda Savage’s story still so significant now?

Nicolette: We, as a society, are still dealing with all the same things she dealt with almost 100 years ago – misogyny, racism, and abuse, not to mention just trying to make it as a single, widowed, and divorced woman with children. This is a dramatic musical that deals with some heavy issues. Savage holds up a mirror to our society to show us how far we have come – or haven’t; I’ll let the audience decide that. Wanda was a woman ahead of her time. She wore pants constantly in a time when women were literally being put in jail for wearing pants. Her career was not your typical “girlie” career; she was a business woman. She continued to reinvent herself with her show The Shooting Stars, in which she was the one constant and her partners changed. It is said that she had a heart of gold, but just don’t cross her; maybe that’s why her partners changed as often as they did. Although she is a flawed character, I think we can all see why she made the decisions she made if we put on the goggles of the 1920s. I also think Savage gives a voice to a forgotten culture, Native Americans, in theater and other media. One thing that I hope to do with this show is to bring awareness and to help preserve my tribe’s – the Chickasaw’s – dying language, which is now endangered and close to extinction. We have put some of the language in the script and in the song “Unconquerable,” which is named after my tribe. The Chickasaws, though small in number, were named The Unconquerable Tribe by other tribes, the French, and others, when they could not overtake them.

Rachel: Wanda was a strong-willed woman who unapologetically broke the norms of traditional gender stereotypes. She learned to shoot as a child and continued to follow that path, despite it being “unfit for a young lady” of the era. I have a running joke in rehearsal that Wanda is the spirit sister of Arya Stark. In this story, men continue to attempt to put her in her place, to exploit her talents, to sexually-harass her, and to threaten her career (none of which were uncommon in the entertainment industry during that time.) As the current theatrical climate continues to expand (finally!) to include stories that would have otherwise been untold, this is the time for Wanda Savage’s story to be on stage.

Do the music and design reference the period style or did you update it to a more current look and sound?

Rachel: The music certainly has a vintage jazzy feel to it. I will let Nicolette expand on that in further detail. As for the look, I am always a fan of a fusion of eras blending together to create a specific, timeless aesthetic. With this, I certainly want to see notes of Vaudevillian accuracy from the era, but presented through a more contemporary rock-and-roll lens. Wanda to me is very punk rock in spirit, very ahead of her time. I want the design to reflect that sense of rebellious independence and unconquerable self-confidence that guided her through some of those difficult times.

Nicolette: We have taken the jazz music of the 1920s and fused it with some funk, blues, and pop. John is a jazz pianist, I have always loved jazz/blues, and we also both enjoy pop music. You can hear all those influences in the songs. As for the Native American music, we have taken the call-and-response style of the culture’s music with open chords and chants and have colored it with a pop feel. It is so cool to hear the Chickasaw language mixed with a modern pop sound. Those who have heard the music, like the two songs we have streaming, have commented on how catchy it is. I love that. I want a musical theater album where every song is catchy and singable, at least in my ears, and I hope in others. I hate getting a show’s album and skipping four to six songs to get to the ones I like. As for design, I think that will be so much fun! In addition to theater and music, I have a background in fashion design (another thing I inherited from Wanda, who designed and made her own costumes) and Rachel has such a creative mind when it comes to those types of things. I have always thought definitely sexy meets rock star meets 1920s. I can’t wait to see what Rachel has done with all that!

What are your hopes for the future of the show?

Nicolette: My dream? To see it on Broadway. I believe it is too big of a show and cast to do Off-Broadway. Just the places alone – circus, Vaudeville, Hollywood, and a brothel – scream a big Broadway stage to me. I think this show has heart, emotion, and excitement that audiences will love. In the meantime, we have scheduled a short first-time run in April at Ja’Duke, a new state-of-the-art theater that was just built in western Massachusetts, before moving it full-force to NYC.

Rachel: This is one of those projects that, when I tell people about the subject matter, there is always immediate interest. Wanda fascinates people. There is undeniably mass appeal for this story, and I could absolutely see Savage debut as a full production in NYC and potentially tour, once we’re on the other side of development.

Thanks to both of you for sharing your thoughts on this fascinating story and on the “untamable, unbreakable, and unconquerable” woman who lived it. 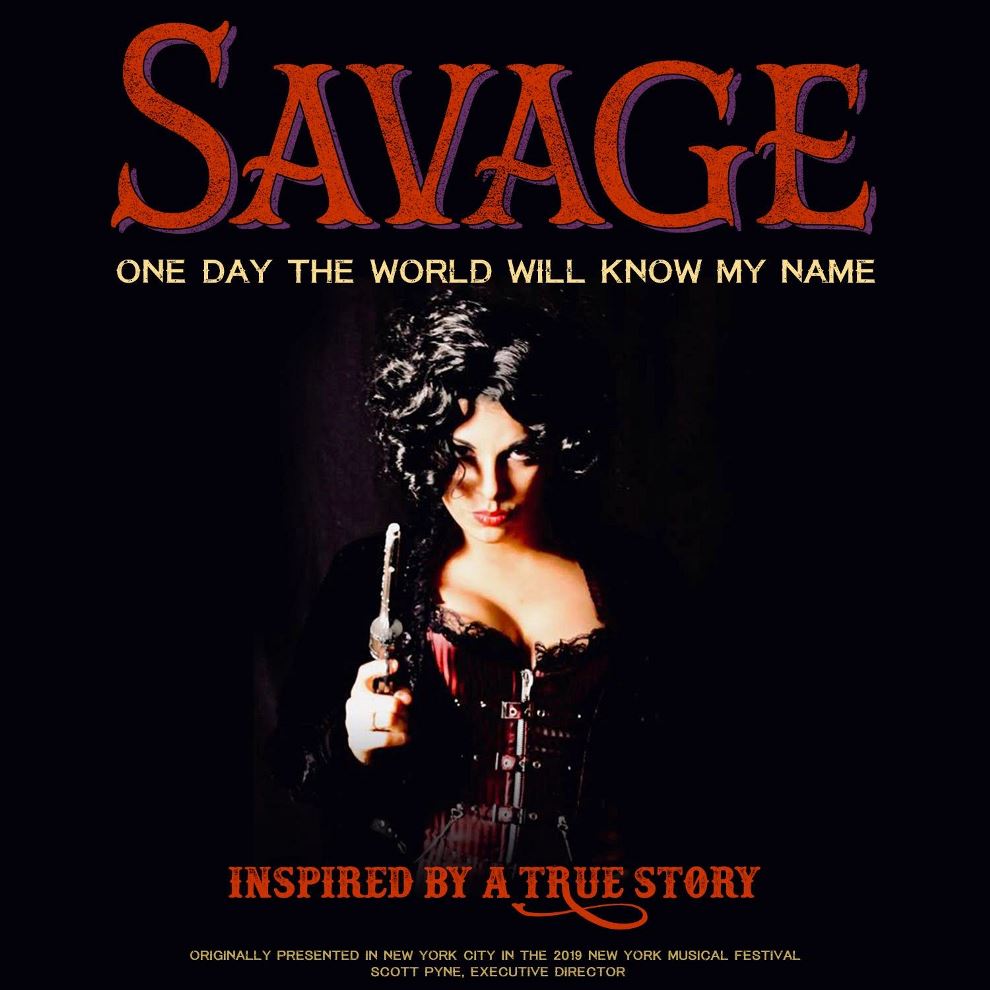