The oldest professional LGBTQ+ theater company in New York, TOSOS (The Other Side of Silence) celebrates Pride not just in June, but all year round, this month with the New York premiere of Merril Mushroom’s 1980s one-act play Bar Dykes. Set in a lesbian bar in the pre-Stonewall era of the 1950s, the immersive production, co-directed by Virginia Baeta and Mark Finley, gives us an inside look at one night out with an assortment of eleven regulars and newcomers, as eyewitnesses to the culture, experiences, and inter-relationships of a community under constant threat in less enlightened and more repressive times.

From the moment we enter the space we are thrust into the not-so-distant past, with a transportive artistic design that recreates the Mid-Century Modern style and atmosphere. A vintage juke box plays pop hits from the era (sound design and music by Morry Campbell), the clientele sits on MCM chairs and stools around retro tables and a bar (with an old-fashioned cash register and rotary phone behind), and character-specific costumes (by Ben Philipp and Rachel Muza) clearly distinguish between the self-defining categories of “butches and femmes.”

As the gathering place begins to fill, we eavesdrop on the characters’ personal interactions, watching them drink, smoke, gossip, flirt, and dance (choreography by Joseph Tudor) in authentic ‘50s style. Filled with slang expressions of the period like “I’m hip,” “What a gas,” and “What a drag,” their dialogue is also sprinkled with such offensive and outdated epithets as “bitch,” “kiki,” and “faggots” – derogatory words that seem shockingly inappropriate in our current climate, but unapologetically capture the full spectrum of human behavior and emotions, and evoke the psychology of internalized oppression (not unlike The Boys in the Band) that results from the wrongful persecution, deprecation, and intolerance imposed on “the other” by a bigoted mainstream society.

The play’s mood shifts from funny (Uré Egbuho is particularly hilarious as Sherry, striking poses and making seductive eye contact with Linda, sweetly played by Kiebpoli Calnek), happy (Azalea Lewis’s Cynthia and Amy Bizjak’s Elaine make an ebullient match), and supportive (Moira Stone as Bo, the bartender, appears to be especially caring and mindful of the establishment’s patrons) to combative, with betrayals, jealousy, verbal confrontations, and physical altercations (fight choreography by Judi Lewis Ockler) erupting within the group (Alex Guhde, Brooke M. Haney, Kimberly Singh, Angie Tennant, Emily Verla, and Jeanette Villafane round out the ensemble of “bar dykes”), as the conversations and drinks flow freely and the evening comes to a disturbing end.

A few perceived anachronisms (employing the term “gay,” which didn’t come into widespread usage until the 1960s, and the inclusion of people of color in the cast, in a period-piece set in 1958, prior to the Civil Rights Movement and desegregation) smartly serve to underscore the universal struggles confronted by LGBTQAI+ people of all identities, races, and ethnicities, and the slow but welcome advances made from then till now.

Written by a woman who experienced the 1950s subculture firsthand in both the Deep South and NYC, Bar Dykes is an important reminder of the oppression and harassment lesbians faced (and sometimes still face) for being who they are and loving who they love. TOSOS is to be applauded for its production of this rarely-seen work and its dedication to keeping LGBTQAI+ history alive and unhidden. 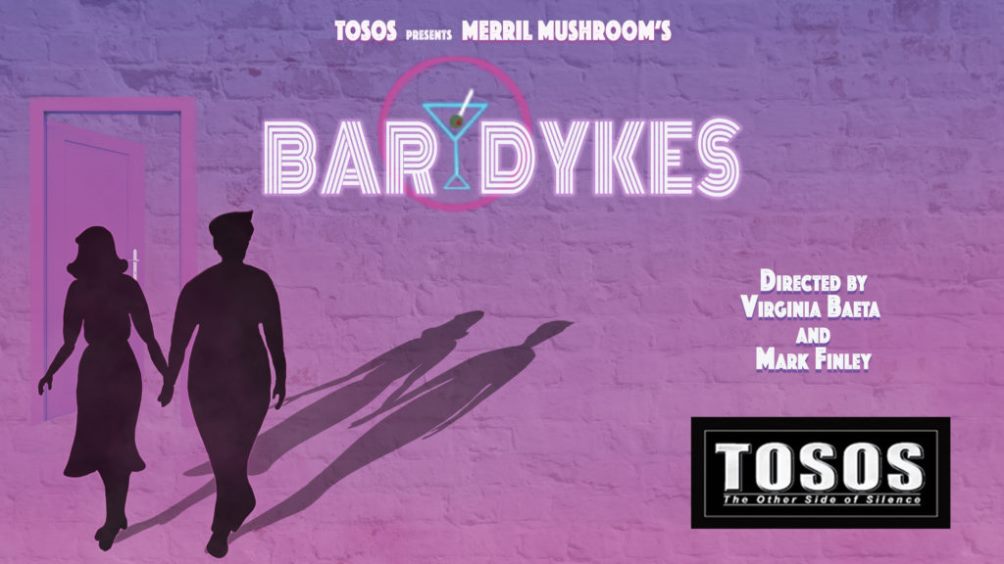