Agatha Christie’s The Mousetrap is a serious whodunit in which strangers are thrown together at a remote place and cut off from the outside world, with a police inspector unlocking a murder mystery in real-time. 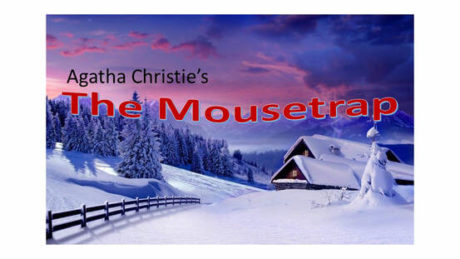 The show works fearlessly to be true to the story as it first played in 1952. In some scenes, the actors try a little too hard and the story gets confusing, but that will probably be fixed in later performances as the troupe becomes more familiar with their roles and Director Rick Starkweather makes a few changes.

The story in The Mousetrap is as follows: Newlyweds Mollie Ralston (Devonna Burrowes) and Giles Ralston (Dash Samari) convert Moksworth Manor, an estate that Mollie inherited, into a guest house. The good news is that the guest house is completely booked its first week of operation. The bad news is that an approaching blizzard may hit before the guests (paying 100 pounds a week) arrive. And arrive they do, including an uninvited guest—Miss Marley (Leilani Cartledge)—whose car flipped over in a snowdrift.

As the story unfolds, Mrs. Ralston, Casewell, and Wren all grapple with their pasts. Wren eventually shares some secrets with Ralston, but the women remain mum. Once Detective Trotter appears, he reveals to the household that evidence in the case of a woman recently murdered points police to Monkswell Manor.

The murdered woman once lived nearby and Trotter warns the houseguests that unless they help him, they too are in danger. While they all initially claim to know nothing of the original incident, several, of course, come under suspicion.

Beatrix Whitehall nailed the role of unlikeable magistrate Mrs. Boyle. Leilani Cartledge proves there are no small parts, just small actors. She takes the minor role of Miss Marley and adds energy, spice and a different kind of mystery when she is on stage. Her island accent was fantastic. Devona Burrowes was also excellent as Mollie Ralston. She was the only cast member to maintain a British accent through the entire presentation. Actors moving from British accents to American was a glaring problem in the production.

As married couple Mr. and Mrs. Ralston, Burrowes and Samari could benefit from playing their characters closer to middle age. They look like young newlyweds on stage, but as the story develops, it is obvious that they are at least in their mid-40s.

Starkweather must also decide what period in which to set the play. Burrowes and Adcock are clothed in today’s designs. Samari and Dausman’s shirts and ties could be from the 1950s. Whitehall’s customs are appropriate, but Marget and Robert look more 2000ish. The same is true of the set. The furniture is old, and a radio is used for entertainment and news. When the telephone is cut, there is no mention of cellphones. But then there is a war reference—to Iraq.

There is plenty of murder and mayhem until the murderer is finally revealed, but you must see the play to see how Thunderous Productions handles the quick and surprising ending.

Running Time: About 2 hours and 10 minutes, with a 15-minute intermission.