Presented at the Pershing Square Signature Center as a one-night-only featured concert in this year’s New York Musical Festival (NYMF), Alive!, with book, music, and lyrics by Josh Canfield, sings a tale of zombies, the missing people they’ve eaten, and a determined news reporter who relentlessly covers the story that others mock, but she knows to be true. Directed by David Ruttura, with musical direction by Taylor Peckham, the terrific new sci-fi musical rom-com follows the action from a small town being terrorized by the undead to a magical journey through a secret portal that could help one of them to reconnect with his gentle and loving human soul, and to change more lives in the process.

Unlike many parodies of the horror genre, Alive! is not just over-the-top outrageous, it’s extremely smart, thoughtful, and witty. There are recurrent self-referencing meta-theatrical jokes that break through the fourth wall, conversations and lyrics that capture the emotions of the characters, and songs that reference a wide array of musical styles, from blues and jazz, disco, pop, and country, to romantic ballads and show tunes, all within a well-synthesized, coherent, and harmonious score.

Under the astute direction of Ruttura, the song list of the staged NYMF concert was punctuated by narration, snippets of scenes, and bits of dialogue that allowed the audience to follow along with the full storyline. An engaging cast of eleven Broadway notables (including some former castmates from Natasha, Pierre, and the Great Comet of 1812, in which Canfield also appeared) captured the personalities, facial expressions, moves and attitudes of the living and living-dead characters with humor and heart, enhanced by Cory Pattak’s colorful lighting. They also brought their stellar voices to the songs, backed to perfection by a live five-piece band (Peckham on piano, Ryan Berg on bass, Jeremy King on guitars, Jeff Roberts on drums, and John Di Simini on reeds), making for a true Broadway-quality experience.

Leading the intrepid life-altering journey to the mystical region were Lindsay Nicole Chambers as the under-appreciated but indefatigable reporter Shelly; Chris Dwan as her smitten photographer Kevin; Amanda Jane Cooper as her unfulfilled co-worker Eve; and Zach Adkins as Zombie 6, who waxes nostalgic about his past and yearns to return to a life of love and compassion, forsaking the pervasive murder, dismemberment, and feasting in “Zombieland.” Also featured were Nicholas Belton as Big Z, the imperious leader of the Zombies; Hunter Ryan Herdlicka as Charles, unlikable head honcho of the TV news; and Blaine Krauss as the Oracle (his hilarious lead vocal on “Last Stop” was a showstopper).

Rounding out the across-the-board excellent ensemble, as the nameless zombies, were Mary Page Nance, Alex Gibson, Kennedy Caughell, and Daisy Hobbs (who also played the semi-operatic Fairy, encountered through the “Portal of Life”). They all joined together with Belton and Krauss (here as Zombie 4) in another musical highlight of the show, “How To Kill a Zombie” – a lively number with soft-shoe stylings, jazz hands, and chorus-line kicks.

Will the zombies triumph and continue to satiate their horrific flesh-eating drive? Or will love save the day and revitalize the deadened spirits with new life and humanity? Find out when Alive! returns for a full-stage production, which we can only hope will follow this outstanding development concert very soon. 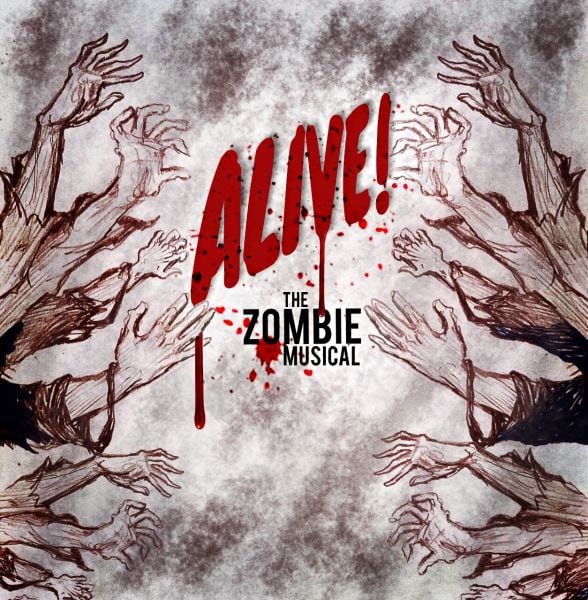