Following its sold-out Off-Broadway run at The Public Theater this past winter, Sea Wall/A Life has made its transfer to Broadway for a limited engagement at the Hudson Theatre. Comprised of two paired monologues, written respectively by Simon Stephens and Nick Payne, the solo pieces follow the identical format of a direct-address memory play. They are also tied together thematically, in their focus on the personal musings of a millennial male getting in touch with his feelings, pondering the inescapable stages of life and death, and dealing with the universal issues of love, loss, and grief, while making his own developmental transition from son to husband and father, in the generational cycle of physical and emotional maturation.

In lesser hands, the sentimental subject, filled with life-changing plot points that tug at your heartstrings, could become unbearably maudlin and cloying (I won’t give any specifics, so as not to spoil the narrative revelations). But under Carrie Cracknell’s balanced direction, and with the star power of Tom Sturridge and Jake Gyllenhaal to deliver the stories of their distinctive characters (Sturridge’s soft-spoken Alex, a photographer, is more gentle and sensitive; Gyllenhaal’s outspoken Abe, in the music industry, is less tender and more cynical), their common painful tragedy of losing a close family member is lightened by joyous recollections (materialized in Sturridge’s nostalgic smiles and distant dreamy gazes) and much-needed bits of comic relief (as Gyllenhaal liberally peppers his musings with sarcastic facial expressions and an expressive use of the f-word, and Sturridge purposely over-enunciates the names of the French places he visited). It is also deepened by Alex’s philosophical contemplations about the existence of God, the meaning of pi, and the phenomenon of a sea wall, and by Abe ultimately playing a heartfelt and hopeful rendition of John Lennon’s “Imagine.”

The empathetic actors not only distinguish between the personalities of their own characters, but also those in their lives, imitating their voices, demeanors, and mannerisms. And both believably capture the feeling of spontaneity that’s inherent in the scripts. Alex leaves sentences unfinished, grasps for the right words, and effects stop-action movements triggered by overwhelming memories (one precisely executed accident while climbing a ladder is especially foreboding). Abe runs through the theater aisles and smashes the fourth wall in meta-theatrical responses to the audience. And each of the two interweaves non-sequential episodes about the different loved ones they are remembering, which elicit a similar emotional response and unite the separate events in their minds (Alex’s non-sequiturs have more staccato breaks, while Abe’s are completely fluid, with a stream-of-consciousness sensibility).

An unobtrusive design subtly reinforces the message of the life-cycle struggles of everyman, with unassuming everyday costumes (by Kaye Voyce & Christopher Petersen), subdued sound effects (Daniel Kluger) and original mood music (Stuart Earl), and a minimal set (Laura Jellinek) with a bi-level brick wall, rolling metal ladder, desk, piano, and spotlights that illuminate the actors and signal the shifts in their stories (lighting by Guy Hoare). A telling video projection on the back wall (Luke Halls) closes the show and reminds us that their individual journeys are but two among all of ours.

Sea Wall/A Life offers variations on a theme that are meaningfully paired and masterfully presented. It is an affecting double bill of very human stories that everyone with a family, and a heart, can relate to, in our shared experiences of dealing with the big questions of life and mortality. 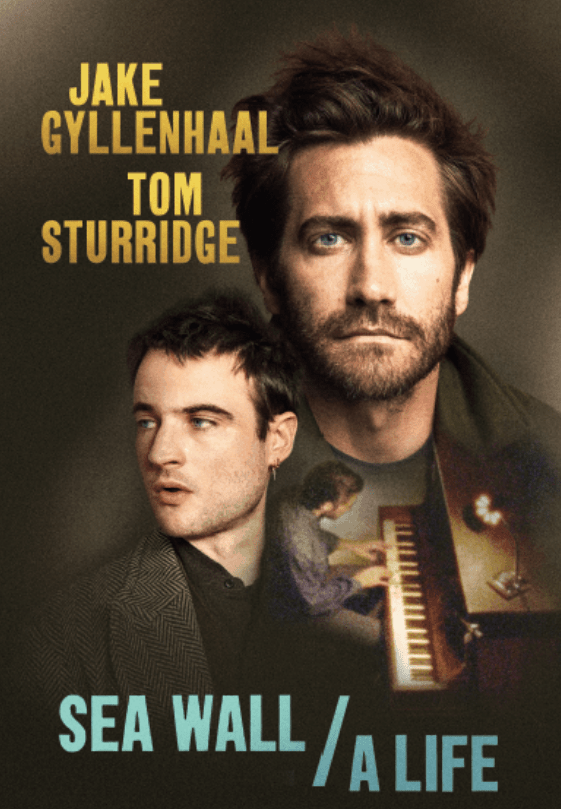