For his smashing debut at Joe’s Pub, Mexican-born and New York-based composer and music director Jaime Lozano gathered a roster of his talented family, friends, and collaborators to join him in his latest cabaret concert, a one-night only full-house performance of Jaime Lozano: Songs by an Immigrant. The terrific all-Latino line-up, backed by the red-hot trio of Ahmed Alom Vega on piano, Rudyck Vidal Espinosa on bass, and Joel Mateo on drums, addressed the meaningful theme of the immigrant experience in America in song and stories, as Lozano hosted the evening and introduced his guests and their featured numbers with his signature warmth, graciousness, and endearing sense of humor.

Through the engaging set list of sixteen songs, with music by Lozano, arrangements by Lozano and Jesús Altamira, and lyrics by an assortment of respected associates, the expressive performers delivered a series of mini-narratives, each from one character’s personal point of view, on finding a new home, learning a new language, dealing with discrimination, trying to fit in, pursuing the American dream, being in love, growing older, and missing their native lands. The consistently masterful vocals, filled with laughs, passion, and insight, were set to Lozano’s contemporary pop- and jazz-infused Latin beat that kept everyone moving and swaying to the rhythms, both on stage and in the audience.

Among the selections were favorites from Lozano’s past chamber musicals Children of Salt, A Never-Ending Line, and more, along with stand-alone songs that referenced the current divisive political climate in the US. Setting the tone were Danny Bolero’s rousing opening rendition of “The Generic Immigrant Welcome Song” with sardonic lyrics by Noemi de la Puente (“I hate you, you don’t belong”); the sweet-throated Gabriela García’s New York debut with “You Gotta Change Your Name” (don’t worry, she doesn’t!); eighteen-year-old rising star Sabrina Peralta’s amusing version of “Way Out There,” about being a first-generation American (lyrics by Tommy Newman); and Florencia Cuenca’s heartfelt solo, accompanied by her husband Lozano on piano, on “The Other Side,” delivering the momentous words by lyricist Neena Beber that question the humanity of building a wall to keep people in and to keep people out.

Also contributing beautifully to the evening were powerhouse performances by Javier Ignacio, Henry Gainza (accompanied by Lozano on guitar), April Ortiz, Marina Pires, Claudia Mulet, and the outstanding Mauricio Martínez (known to fans for his roles in the Broadway production of On Your Feet! and Lozano’s Children of Salt in the New York Musical Festival), who, in addition to his stirring vocals on “Enough Is Enough” (lyrics by Lauren Epsenhart), the world premiere of “Dreamer” (lyrics by Jorge Castilla), and a romantic duet with García on “Morena, Cariño” (lyrics by Epsenhart), also offered sincere comments about the importance of acceptance.

If you couldn’t get tickets for the sold-out concert of Songs by an Immigrant at Joe’s Pub, and missed the livestream of the evening on You Tube, you can visit Jaime Lozano’s website for the latest information about upcoming events with this delightfully funny, personable, and accomplished artist and his colleagues. 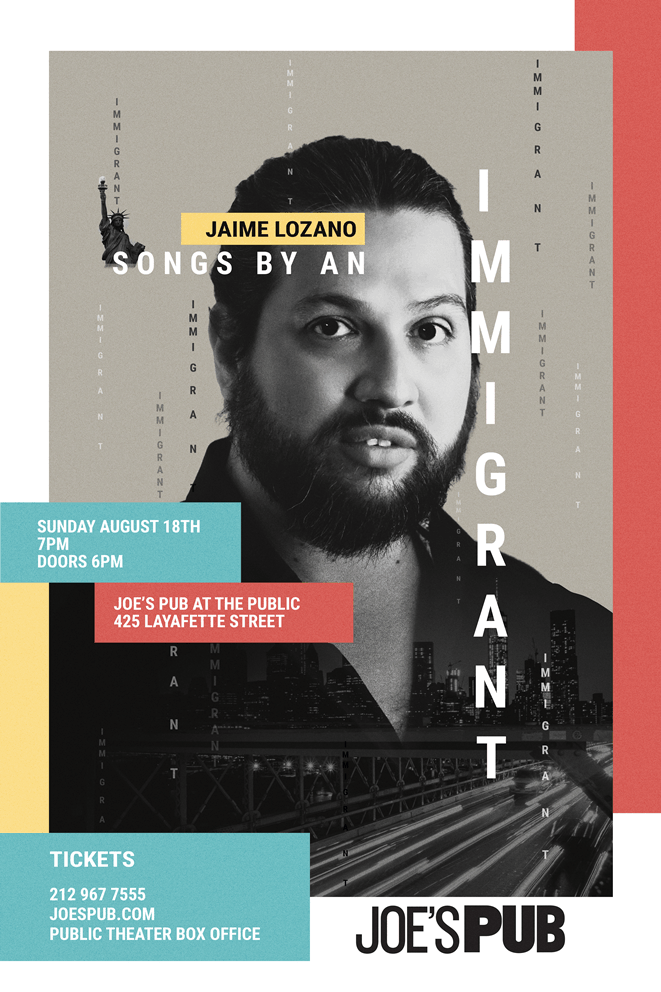