Images, information, and interpretations are the main ingredients of Da Vinci & Michelangelo: The Titans Experience, which has now arrived in New York. Though presented Off-Broadway at St. Luke’s Theatre and advertised as a “One-of-kind [sic], Multi-Media Theatrical Performance,” it is neither a work of theater per se (not even a monologue performed by an accomplished actor), nor is it unique. It is, in essence, an illustrated lecture in Art History, using videos, PowerPoint projections, slides (141, to be exact, in less than two hours), and, at times, a laser pointer (as every Art History professor has done since the last century), to offer a fast and furious review of the paintings, drawings, sculpture, inventions, and enduring influence of the eponymous artists and their period.

According to the website (no biographical information is provided in the program), Mark Rodgers, the presenter and creator (along with John Rodgers), has a background in business, with no specified credentials in the theater or degree in the arts. His fast-talking over-the-top histrionic delivery (in marked contrast to the classical tenets of balance, calm, and control) is more in the style of an overly zealous evangelical preacher or motivational speaker than a professional actor or scholar, punctuated by high-decibel reiterations of “I’M DYIN’ TA TELL YA!!!” and “HOW COOL IS THAT???” The theme and intent of the presentation, akin to an extended live-stage self-promoting infomercial, were inspired by traveling exhibitions that he curated, displaying copies of works and recreations of machines by the Italian High Renaissance masters (a video loop of which plays as the audience enters and awaits Rodgers’ appearance).

Filled with mispronunciations of the Italian names and titles he cites (Verrocchio, Medici, and Pietà numbering among the many), Rodgers gives summary accounts of the style (briefly mentioning the impact of Italian art on Northern Europe, but failing to acknowledge the seminal innovations and inspiration, since the Late Gothic era, that flowed from the north to the south) and gossipy anecdotes about the artists (Leonardo was the better looking of the two; both ate a mostly vegetarian diet; their competitive antipathy was well known), their works (in 45 segments, ranging from Leonardo’s portraits and scientific designs for flying machines and war machines, to Michelangelo’s religious statuary and frescoes for the Sistine Chapel), and the period (a voice-over video of historic Italy and its famed inhabitants opens the presentation). He also offers random comparisons with some of his favorite post-modern artists (most notably musicians Les Paul, whose electric guitar employs a mechanism originally envisioned by Leonardo, and Paul McCartney, quoted for his belief that there will always be new creative geniuses on par with The Beatles), intended to bring “a brand new, contemporary light” to the subject.

Frenetically moving around the stage (directed by Bill Stine), in and out of the spotlights intended to illuminate him, but often missing the mark (lighting by Maarten Cornelis), Rodgers directly addresses the audience, asking questions about his subject (as a teacher would do), discussing his chosen images (projection design by Shari Debandt), and weaving back and forth between the two artists, sometimes rendering the visuals out of sync with his commentary (e.g., a series of details of Michelangelo’s David appears on the screen when he’s talking about Leonardo). The quality of the projections, too, backed by intermittent bits of music (Rodgers is also credited as Composer), does not give a consistently good indication of the originals (the slide of Leonardo’s Mona Lisa is especially faded in color and contrast).

If you’re expecting to go to the theater for a true Off-Broadway show, be forewarned that this is not one. And if you’re interested in learning about the great Italian High Renaissance masters, you would be better advised to visit a museum that houses original art (we have many world-class museums in NYC), take a guided tour by a trained docent, or attend a lecture by a professional curator or other educated specialist in the discipline, to get a much more accurate view of the artists, their works, and their era than is offered in DaVinci & Michelangelo: The Titans Experience. But if you’re in the market for a fervent pep talk encouraging you to be creative and “to discover [your] own ‘inner’ Da Vinci and Michelangelo” after a whirlwind survey of their selected contributions, you just might be the right target audience for Rodgers. 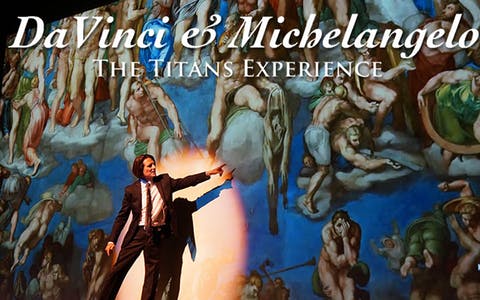