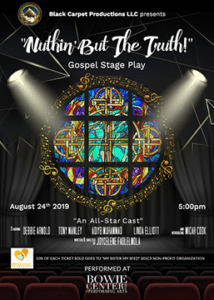 Nasty church politics were at the center of Nuthin’ But The Truth! After the death of Rising Star church’s long-time pastor, the fight to fill the leadership void was led by Assistant Pastor Darryl Wright, who battled the formidable Mother Evelyn for the decision as to who would lead the church. There was the trope of “saving the farm” i.e. the church needed a great sum of money to fix the foundation or be demolished. Twists came in the form of reveals about who was brought in as the new pastor and the new pastor’s family history.

Clearly commanding every scene she was in, Deborah Arnold Franklin dazzled as Mother Evelyn. At times matronly and at other times a scold, Franklin brought an impressive arc to not only her character but to her scenes.

There was good interplay between Linda Elliot’s church secretary, Brenda, and Manley’s Pastor Wright. Brenda, Wright’s long-suffering fiancée, had quite the character arc in this story.

There are a number of musical interludes in the show, including James Coggins’ superb rendition of “Ribbon in the Sky.” Ten-year-old Phoenix Averiyire pleased the audience immensely when she sang “Amazing Grace.” There was a nice instrumental musical number that featured the dancing of Kamille Lonon. Manley displayed Pastor Wright’s power-hungriness in “It’s My Time.” Calvin D. Tucker Jr. had a Black militancy-tinged scene as choir member Christopher.

Derek Quick was hilarious as the high-stepping choir director, Reginald. André Pearson had a comic turn as the stuttering Deacon Johnson. Darryl Bradley mined many laughs by bringing a distinctive walk–with a walker and later a cane–to his character Bro. Samson.

Rita D. Lews had a moving scene as a prostitute named Angel. Diane Alexis Wolcott was chuckle and cringe-inducing as an officious County Inspector. Leslie Bond, who played CoCo, was good arm-adornment for Pastor Wright. I loved the energy of Mildred Simpson, Valerie Barnum, and Eileen Davis, as Eula, Church Lady #2, and Church Lady #3 respectively.

Thanks to the carpentry work of Glen Parton, six flats were made up to look like walls of a church complete with stained glass. (However, it would have been nice if the upstage walls had been moved closer together–creating a diagonal formation–to provide a better viewing angle for the audience.) Fadlelmola used an enormous, circular projection of a stained-glass window on the upstage curtain.

When it comes around again – and it will – be sure to catch this show. Nuthin’ But The Truth! is a terrific show to see as this theater season comes to a close.

Note: Ten percent of every ticket to Nuthin’ But The Truth! that is sold, supports the anti-sex trafficking non-profit organization My Sister My Seed.