The John F. Kennedy Center for the Performing Arts hosts its 18th annual
Page-to-Stage New Play Festival from Saturday, August 30, 2019 through Monday, September 2, 2019. The festival is a free three-day celebration of local playwrights featuring more than 65 theater companies from the D.C. metropolitan area. Theaters and artists participating in Page-to-Stage present open rehearsals, concert readings, and workshops of new plays that are still in the development phase. 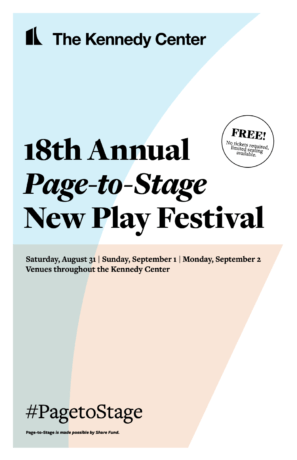 Page-to-Stage reflects the dynamic theater landscape of the D.C.-area, through free performances and participatory interactions with audience members, such as a post-presentation book discussion with author Bassey Ikpi and Marc Bamuthi Joseph.

Participating theaters include the historic Ford’s Theatre, whose seasonal programming highlights the diversity of the American landscape; Mosaic Theater Company of DC, a company dedicated to producing socially relevant art; The Welders, a playwrights’ collective, currently transitioning into its third generation of theater-makers; African-American Collective Theater, dedicated to increasing visibility for the Black LGBTQ community; and many others.

This year, many of the participating theaters share the compelling stories of artists, social justice icons, innovators, and historical figures. Highlights include Monumental Theatre Company’s Montgomery, following the life of Claudette Colvin, the first African American woman to refuse to give up her seat on a bus in Montgomery, Alabama; and Huemanati Artist Collective’s Day Dream, a work about jazz artist Billy Strayhorn; among others. 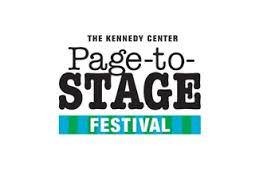 • Brave Soul Collective’s #BlackGayRage, An evening of performances which celebrate
black gay existence and many of the challenges faced by Black LGBTQ people
• Company Lambe-Lambe’s Son Titere, a fusion of street puppetry and Mexican folk music
• Project 2020’s The Last Battle of the American Revolution, a medley of scenes from
stage works that celebrate and relate events from the struggle for Women’s Voting Rights in the United States
• Voices Unbarred’s Dear America: A Disconnect Between Perception & Truth,
exploring the perception of inmates versus the reality, engage with real stories of our
participants, and help brainstorm potential solutions to the issues raised.

Below is the full roster of participating theaters. All family friendly shows take place Saturday morning and afternoon. For the schedule, please visit the festival website.

For the most up-to-date schedule, please visit the Festival website.
Seating is on a first-come, first-served basis. Doors open 30 minutes prior to the start of each free and non-ticketed performance. Seating is limited and subject to availability. Family friendly readings are specified in the listings below. All other events are not aimed at children and likely have adult language and themes. Age recommendations have been determined by the company.

TICKET INFORMATION
For the schedule, please visit the Festival website.

Page-to-Stage is FREE and open to the public. No tickets required. Seating is on a first-come, first-served basis. Seating is limited and subject to availability. Doors open 30 minutes prior to the start of each performance. There is no free parking for free events.

FUNDING CREDITS
Page-to-Stage is made possible by Share Fund.