London’s acclaimed revival of Betrayal – Harold Pinter’s 1978 drama about the devastating effects of infidelity, inspired by the playwright’s own seven-year extra-marital affair in the 1960s – has transferred to Broadway for a limited engagement at the Bernard B. Jacobs Theatre. With its original stellar cast, brilliant staging, and potently spare design, the searing production provides a deeply disturbing examination of the psychology of adultery, its consequential lies and deceptions, and their impact on everyone involved, both directly and collaterally.

The narrative unfolds in reverse chronology, beginning with the meeting of ex-lovers Emma and Jerry two years after the end of their affair, when she tells him that she and her husband Robert – Jerry’s best friend and colleague, for whom he served as best man at their wedding – are getting divorced. It then traces the trajectory of Emma and Jerry’s illicit relationship back to the play’s final scene of their first drunken flirtation, through their time together and their interactions with Robert, who, we learn, harbors unsettling secrets of his own.

Director Jamie Lloyd employs the ingenious device of having all three characters appear on stage at all times. When they are not the focal point of the scene or dialogue, they are still there, in the background or off to the side, as a reminder of their omnipresence in each other’s lives, thoughts, veiled feelings, and duplicitous actions. Their telling facial expressions, eyes, postures, and movements, when removed from the main action, reveal their internalized torment much more honestly than their carefully calculated words, guarded conversations, and controlled outward reactions to, with, and for one another.

Making their Broadway debuts from the premiere British cast are the extraordinary Zawe Ashton as Emma, Charlie Cox as Jerry, and Tom Hiddleston as Robert. Their three tour-de-force performances deliver the psychological nuances, underlying motivations, emotional avoidance, and ethical deadening of their characters with all of the riveting understatement inherent in Pinter’s signature economy of words, pregnant silences, and deliberate pacing, as their lying becomes habitual, or maybe pathological (even about what is no longer consequential) and they continue to pile lie upon lie, deceit upon deceit, and betrayal upon betrayal.

Ashton’s Emma, though smiling and “fine” on the outside, is clearly unhappy, wanting for more in love, and therefore willing to do anything it takes to find it, but then rails against that kind of behavior when she is the victim of it. Cox’s Jerry is noncommittal until he is subjected to the same duplicity with which he has treated his friend and his lover (and unseen wife), at which point he, too, becomes jealous and indignant, in a laughable show of pride and double standards. And Hiddleston’s Robert exhibits moments of profound pain that quickly shift to the subterfuge of apathy, as he retains his friendship with Jerry and remains for years in his marriage to an unfaithful wife, though he himself has not been forthright with either of them. Together they portray the absence of reliability, honesty, and trustworthiness, and the presence of self-justification, that mar the human condition in Pinter’s shattering drama.

Soutra Gilmour’s minimal bare-stage set (with just two wooden chairs, a backdrop of grey walls, and a floor that rotates as Emma changes partners) evokes the emptiness, desolation, and stylizations of the characters’ words, feelings, and acts. Ben and Max Ringham’s original music and sound contribute to the mood, and Jon Clark’s lighting not only signals the shifts in time, but casts silhouettes of the figures that also bespeak the darkness and void that lurk behind their façades.

The Broadway transfer of Betrayal is a powerful must-see production of a 20th-century classic that should engender as much praise in New York as it did in London. Don’t miss it. 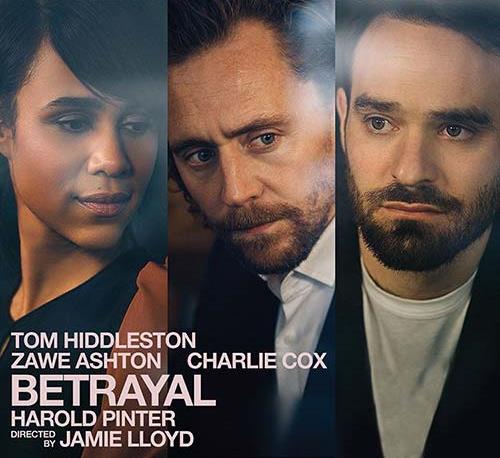